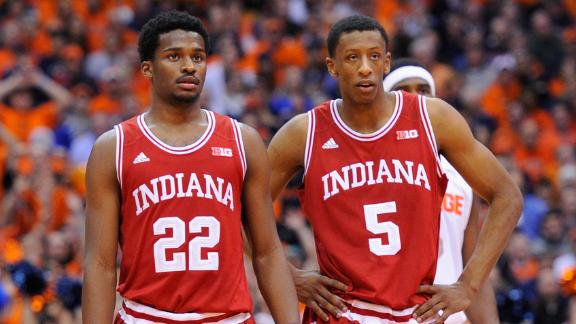 "We're not doing a great job in leadership at all," he said.

Two days after announcing three players had been suspended for four games each, Crean spent 45 minutes taking questions about the state of the program, the discipline he has imposed, the reaction of angry fans and how he hopes to avoid any more issues with the school's signature sports program.

He's going to be tougher.

"OK, we've had a lot of people come through in 16 years as a head coach that have dealt with sterner and ended up pretty good. But I just think you have to continue to get their attention any way possible."

If Crean didn't have the players' attention before, he certainly does after last weekend.

Sophomore forward Devin Davis remains hospitalized after sustaining a serious head injury Saturday morning when freshman forward Emmitt Holt allegedly ran into him with a car. According to the police report, Davis, 19, and Holt, 18, had been drinking. School officials said Holt's blood-alcohol content was 0.025, well below the legal limit of 0.08, but Holt was cited for illegal consumption of alcohol, a misdemeanor, and operating a vehicle under the influence of alcohol under age 21.

Crean said Davis can sit up in a chair, take walks and play card games.

"If I could go back and do it over, we'd have practiced till 11:30 p.m., midnight, showered up, got 'em something to eat, took 'em back to my house, figured out how we were going to do it, got up the next morning, came back in here [Assembly Hall] shortly after 5, when it's legal to practice again -- if I knew that that situation was going to happen that night," said Crean, noting NCAA rules only allow teams to practice until midnight.

On Monday during his weekly radio show, Crean told listeners Holt, starting guard Stanford Robinson and starting forward Troy Williams had been suspended for Indiana's first two exhibition games and the first two regular-season games. Crean didn't say why Robinson and Williams were suspended other than acknowledging that the infractions occurred during the summer. Sources told ESPN the two were suspended for failed drug tests.

Indiana's school rules require athletes who fail drug tests to miss 10 percent of the season in their sport. While Crean again steered clear of citing an official reason, he said he did add a fourth game to each player's punishment.

It's been a disconcerting trend for Hoosiers fans.

In September, junior guard Kevin "Yogi" Ferrell and Robinson entered pretrial diversion programs after being charged in April with consumption of an alcoholic beverage by a minor and possession of false identification. In February, forward Hanner Mosquera-Perea, now a junior, was arrested in Bloomington on preliminary drunk driving charges.

Former players such as Cody Zeller and Jordan Hulls used their Twitter accounts to urge the new Hoosiers to abide by the higher standards they helped set during Crean's first rebuilding project in Bloomington.

"I understand some things have been said, and personally, I couldn't agree more," said Nick Zeisloft, a junior guard who played at Illinois State last season. "They're correct and we need to follow that example."

Crean's usually friendly radio-show fans started asking pointed questions about why he should keep his job and whether he should take the blame for all these legal problems. Dan Dakich, a former Hoosiers player and Indiana's interim head coach in 2008, also critiqued what was taking place inside the program on his daily radio show.

As the torrent of opinions heated up, Crean kept his emotions in check.

Until Wednesday. At some points during the news conference, Crean sounded flatly disgusted and called on players to live up to the rules.

At other times, he sounded poignant, sad and once sounded as if he were choking up.

"So do I feel a responsibility?" Crean said. "More than you can possibly imagine."

While Crean didn't call for wholesale changes or outline specifics of what he'll do to fix the problems, he did promise things would be different.

"The next stories that might be getting done now might be that he's a dictator and he's no fun to play with and anonymous sources that say he doesn't let us do this, he doesn't let us do that. I'd much rather deal with that than I would have to look at parents like I did the other night," he said. "We need to make the changes and make them better, make them sterner."

"Neither Tom, nor I, have a problem holding these kids to a higher standard," athletic director Fred Glass told The Star on Monday.

Crean recognizes that the higher standards will be hard for some but makes no apologies for it.

"We're going to continue to do everything we can do to get decision-making to improve, to get immaturity to become maturity," Crean said. "Does that mean everybody's gonna make it here? Maybe not."