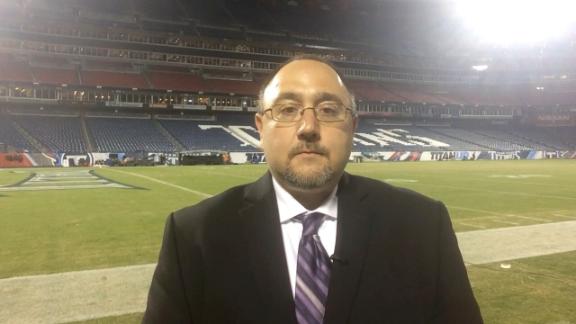 After the Jaguars' 36-22 lossto the Titans on Thursday night, Khan told the Florida Times-Union, "Actions speak louder than words. Very little for me to say." He later added that coach Gus Bradley would not be fired.

A source close to the team confirmed to ESPN that Khan is not going to fire Bradley, who is 14-41 in his four seasons with the Jaguars. Khan is going to stick with the man whom he tasked with rebuilding a franchise that had apparently hit rock bottom in 2012, the source said -- at least for now, anyway.

Thursday's loss was the low point of Bradley's tenure. It came just three days after Khan spoke to the team and asked the players why they weren't winning games and what he could do to help. It was not a confrontational meeting, but there certainly was an unspoken message that things needed to get better.

Instead, the Jaguars gave up 354 yards and trailed 27-0 at halftime. The Jaguars are now 2-5 and have lost 18 of their past 20 road games, which includes a seven-game losing streak against AFC South opponents.

Despite that, Bradley said he was not worried about his job.

"I worry about this team and why did we perform like that in the first half and figuring out how can we get it right," he said.

Quarterback Blake Bortles, who turned in another dismal first-half performance (8-of-16 for 64 yards), said the players deserve more of the blame for the team's struggles.

"Gus has been my head coach since I've been in the NFL, and I would love to play my NFL career for Gus Bradley."

That will depend on how many games the Jaguars win the rest of the season. That's going to be tough because the Jaguars entered Thursday night's game with the third-toughest remaining schedule in the NFL based on opponents' win-loss record. Only one team, Indianapolis, enters this weekend's games with a losing record.

"Everyone knows [Bradley is under pressure to win] and feels strong about Gus," receiver Allen Hurns said. "No matter what it is, you try not to listen to it or let it get to you, but it's kind of impossible now. But hopefully they'll just stick it out with him, but we need to find something to get this team going, whether it's next week -- we have to find a way.