James Harden on this season's Rockets: 'This is the year' 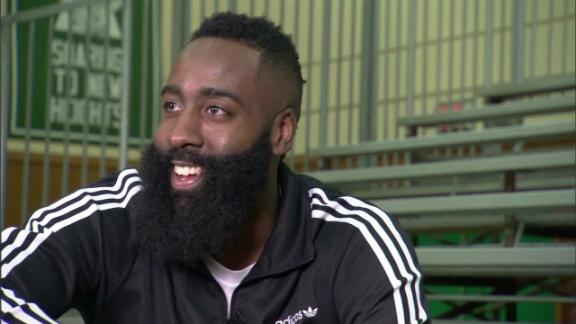 LOS ANGELES --Superstar guard and MVP front-runner James Hardensays he believes the 2017-18 season is "the year" for the Houston Rockets.

"This is the year. For sure," Harden told ESPN on Tuesday in an exclusive interview when asked what his expectations for the Rockets are this season.

Harden, who is in town because the Rockets face the LA Clippers on Wednesday (10:30 p.m. ET on ESPN), visited Audubon Middle School, his old stomping grounds tucked away in the Leimert Park neighborhood of Los Angeles, to announce that he and Adidas are partnering to refurbish both the indoor and outdoor basketball courts at his former middle school this summer.

He surprised and greeted hundreds of eager students, playfully shot around with them on an outdoor court amid drizzling rain, and gave each student present a pair of his Adidas Harden Vol. 2 sneakers.

When asked how the Rockets, who are in the midst of a 13-game win streak and have the best record in the NBA at 47-13 (a half-game ahead of the Golden State Warriors), are coming together post-All-Star break, Harden couldn't help but gush about how great the season has been and how this team is probably the best one on which he has ever played.

"The front office -- [general manager] Daryl Morey and [CEO] Tad Brown -- those guys did an unbelievable job," Harden said. "From last year, bringing [Eric Gordon] and [Ryan Anderson] over. Then obviously adding [Chris Paul] and [PJ Tucker] and [Luc Mbah a Moute] and then you get [Gerald Green] and Joe Johnson.

"This is probably the best team I've ever been a part of, from top to bottom. The chemistry that we have, included with the coaching staff -- I mean, we're having a lot of fun."

As for Wednesday night's game, Harden is looking forward to returning to Staples Center and actually playing against the Clippers this time.

Harden missed the contentious Jan. 15 matchup -- which featured two ejections, five technical fouls and a postgame altercation both inside and outside of the Clippers' locker room -- due to a Grade 2 hamstring strain he suffered against the Los Angeles Lakers on Dec. 31.

"I was there, and I didn't like it at all," Harden told ESPN when asked about what happened between the teams in January. "But I'm happy to be on the court tomorrow and help my teammates."

Upon being asked what the difference in the game will be withoutBlake Griffin -- whom the Clippers traded to the Detroit Pistons on Jan. 29, two weeks after he was a central figure in the scuffle with Houston -- Harden ignored the question and acted as if he didn't know who Griffin was.

Harden said he predicted a playoff atmosphere at Staples Center on Wednesday night, since the Clippers are fighting for a postseason berth and the Rockets remain in a heated battle with the Warriors for the West's No. 1 seed and presumably home-court advantage throughout the 2018 postseason.