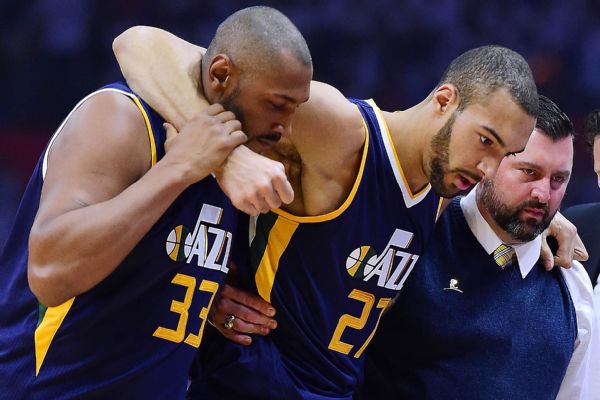 Utah Jazz center Rudy Gobert has been upgraded from doubtful to questionable for Sunday's Game 4 against the LA Clippers.

Gobert, a Defensive Player of the Year and All-NBA candidate, has not played since suffering a hyperextension and bone bruise to his left knee on the first possession of the series.

Gobert's injury has forced Derrick Favors, who has been limited all season due to a bone bruise in his left knee, into the starting center role. Favors, who missed a month late in the season in an attempt to get healthy, has averaged 34.7 minutes per game during the series. He struggled while playing a season-high 38 minutes in Friday's Game 3 loss, finishing with only two points and six rebounds, compared to 17 points and 13 rebounds by Clippers center DeAndre Jordan.

Gobert averaged 14.0 points, 12.8 rebounds and a league-high 2.6 blocks per game during the regular season.