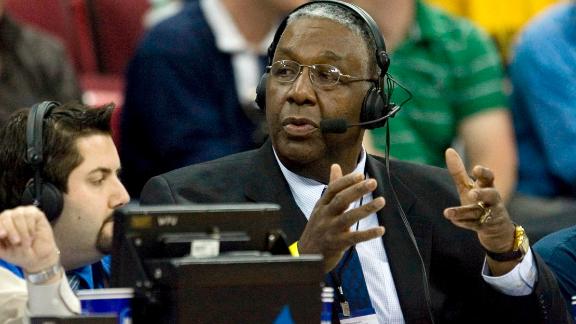 Back in his day as the head coach at Georgetown, John Thompson Jr. was never shy with his opinions, solicited or otherwise.

Age has not exactly softened his views.

Thompson, once memorably ejected after earning three technical fouls during a Syracuse game, interrupted his son's news conference following the Hoyas' comeback win against Creighton, to weigh in on the game's officiating.

"Last two games have been terrible,'' he said, according to CasualHoya.com. "You can tell the f---ing commissioner and everybody else in the Big East I said that.''

Against the Bluejays, the Hoyas were whistled for 27 fouls to Creighton's 21. In their previous home game against Villanova, they topped the Wildcats in fouls 23-13.

Thompson is a fixture at his son's news conferences, usually leaning up against a back wall of the interview room. Occasionally he pipes in with a comment or two but rarely does it merit a headline.