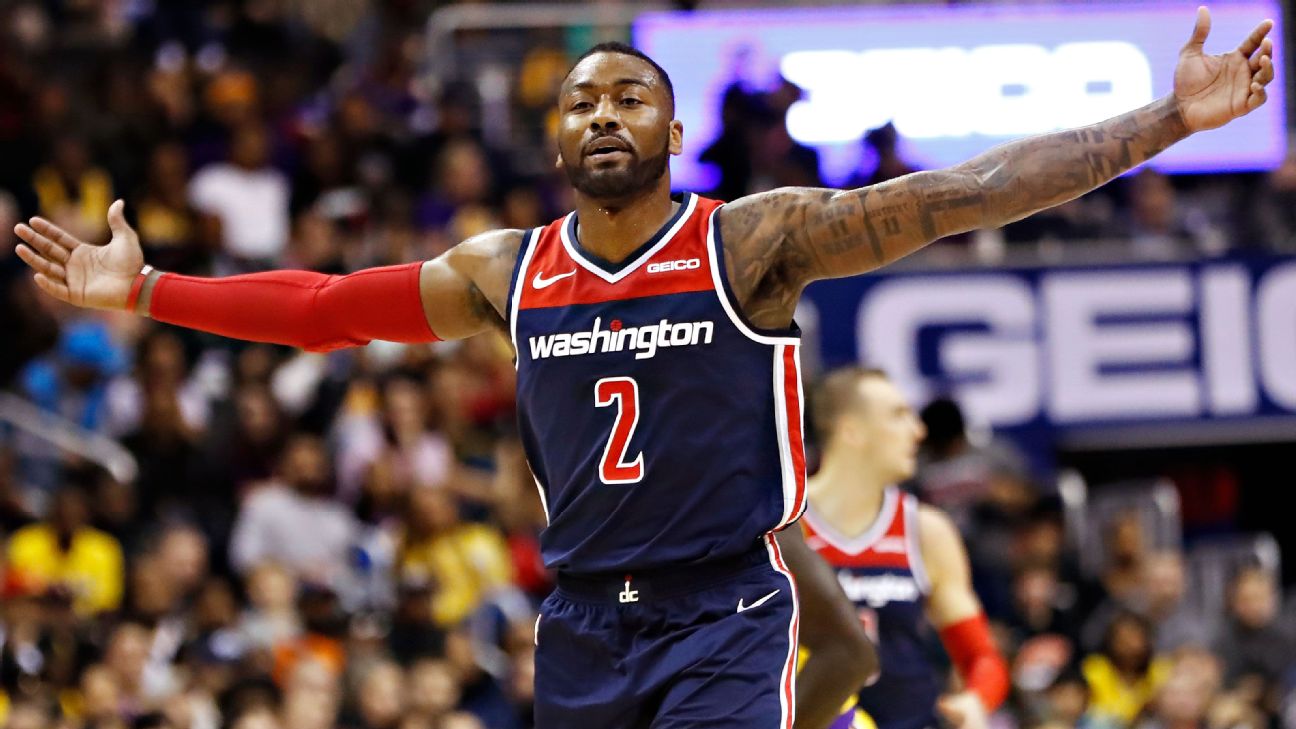 WASHINGTON -- In their first game since reworking a deal for Trevor Ariza, the Washington Wizards played perhaps their best game of the season, with John Wall and Bradley Beal playing like a dominant All-Star backcourt.

The Wizards snapped a four-game losing streak doing something not seen often in their franchise history -- they got the better of LeBron James. Wall exploded for 40 points, 14 assists, 6 rebounds, 3 steals and 2 blocks while Beal added 25 points and 12 rebounds in an inspired 128-110 win over the Los Angeles Lakers at a packed Capital One Arena.

"We haven't been the team we want to be, and all we kind of do is take this as a positive step and try to move forward," said Wall, who became just the third player ever to have 40 points and 14 assists against the Lakers, according to the Elias Sports Bureau.

The Wizards (12-18) didn't just beat the Lakers on the court on Sunday -- they also beat out the Lakers and other teams for Ariza when they struck a deal with Phoenix for the two-way forward in exchange for Kelly Oubre Jr. and Austin Rivers. The trade, which is pending an official announcement, happened after a three-team trade between the Wizards, Suns and Grizzlies fell apart in epic fashion with a mix-up over whether Dillon Brooks or MarShon Brooks would be involved in the doomed deal.

Ariza played for the Wizards from 2012 to 2014, and Washington management hopes the veteran will have a positive impact in the Wizards' locker room during what has been a tumultuous season.

"We got to move forward," Beal said when asked about the trade. "... It was good to see [Oubre's] development, and he's like my little brother. From that aspect, I'm a little sad about it, hurt by it. But it is a business at the end of the day."

But Beal also said Ariza is the "perfect fit" for what the Wizards need.

"He always accepts the challenge defensively and his leadership qualities and his [ability to be vocal], everything he's about, his morals on and off the floor, [is] everything that we need. He's a great character guy, perfect fit."

After a 2-9 start to the season, the Wizards are still hoping to contend for a playoff spot in the Eastern Conference. If Wall plays the way he did from the start against the Lakers, when he had 28 points and eight assists in the first half -- including a step-back rainbow jumper at the buzzer over Tyson Chandler -- the Wizards should be a lot better.

"He's obviously the key," Wizards coach Scott Brooks said. "Him and Brad are the key. They are the best players, they are All-Star players, but they need to bring that energy every night. It goes on them and then our role players need to be stars in their roles. That's what makes good teams go. We have been banged up. We are playing different lineups, but that is no excuse to play hard. That's your job -- you have to do that."

"We have to have more guys, and I don't like to say this, we need more guys to play hard," Brooks said. "We are trying to find that. I know that Tomas does play hard and Sam plays hard. And somebody else is going to come in that is going to play hard."

Wall said the Wizards did not play one of their best games of the season because management just shook things up.

"Just everybody out there playing with a lot of energy, probably because we were short-handed knowing we could get embarrassed playing LeBron, knowing there's going to be a lot of Lakers fans out there, so got up for the game," Wall said. "We have to find a way to get up for those teams that are not the Lakers or the Warriors or those dominant teams in the East and the West.

"When we figure it out, then we'll be one of those teams that people start taking serious and be more consistent."