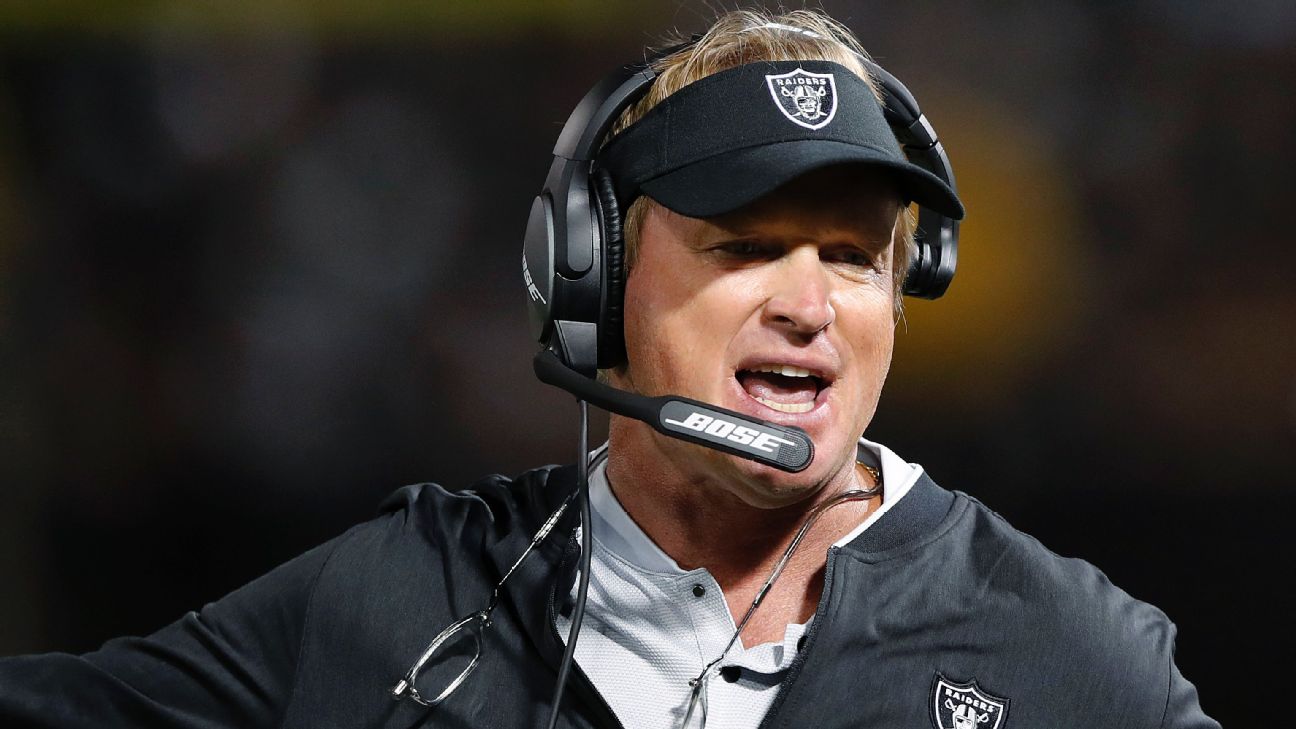 OAKLAND -- It took all of 60 seconds for Jon Gruden to realize he was all the way back as an NFL coach with the Raiders after nine years in the Monday Night Football booth.

It happened when Marshawn Lynch's 60-yard touchdown run was called back on a holding penalty by left tackle Kolton Miller, the Raiders' first-round draft pick. As you might expect, Gruden did not agree with the flag.

"Chucky," Gruden said, referring to himself in the third person, "came out for a brief moment tonight."

So it was no surprise that Gruden, lured away from the ESPN booth in January after nine seasons as a broadcaster, received one of the loudest ovations of the night during introductions. The crowd still seemed stunned that Gruden was back after the late Davis traded him to Tampa Bay for two first-round draft picks and $8 million.

When Gruden was introduced as Raiders coach, Charles Woodson, the former Raiders great, had an inkling that the players might have to adjust to Gruden's "star-like quality," as well as the relationship he had with the Raiders' fan base.

"He'll be the most popular guy on the sideline," Woodson said then. "It won't be Derek Carr, it won't be Khalil Mack, it's going to be Jon Gruden."

On Friday night, Gruden battled nostalgia, as well as the referees and the Lions in a 16-10 preseason victory.He even changed the direction from which the Raiders were introduced. Instead of coming out from the tunnel under the west stands, the team emerged from in front of the Black Hole on the south side of the stadium, as they did in Gruden's first tenure, from 1998 to 2001.

"It was awesome," Gruden said. "I mean, I saw some recognizable faces that had got a little bit older, saw some old friends that mean a lot to me. Like I've said all along, it's a great responsibility. The nostalgia's worn off, so we have to do something with the opportunity, but it sure was great to see the Raider fans, and they stayed with us until the end, and I really appreciate it."

"Yeah, I thought we got off to a great start," Gruden said. "I was really ticked off, though, after [Lynch's run] was called back. You know, I just got to the stadium, I just called my fourth play."