Jordan Spieth in PGA contention after shooting 67 in 2nd round 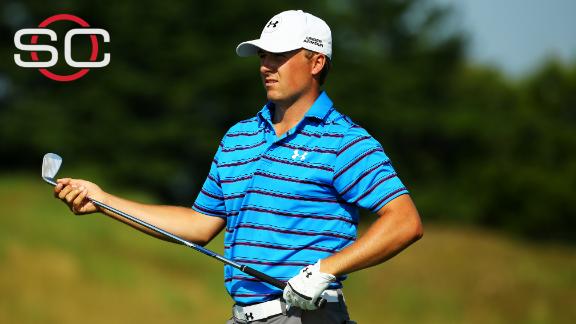 HAVEN, Wis. -- Jordan Spieth did not sound like a man who is satisfied with his game, even though he has again put himself in position to contend for a major championship this weekend.

Spieth shot 5-under-par 67 on Friday at Whistling Straits to trail clubhouse leader David Lingmerth by a stroke at the PGA Championship.

Matt Jones owned a two-shot lead atop the leaderboard after the second round, which was completed Saturday after thunderstorms suspended play Friday. The storm blew down the scoreboard at the main entrance to the course.

After winning the Masters and the U.S. Open, then missing a playoff by one stroke last month at The Open, Spieth, 22, is in the mix again -- although not without a bit of angst.

"I'm still not pleased with the way I'm driving the ball at all," said Spieth, who made six birdies and just a single bogey Friday. "I'm hitting some quick draws when I'm playing a normal shot, which is weird. I haven't had that really this whole year. So I was kind of just trying to guide the ball off the tee.

"In order to keep shooting rounds like today, I'm going to need to drive the ball a little bit better and make a few more putts, which are really the two keys for me this weekend. Because it's just going to get more challenging with the pin locations and firmness of the greens."

Spieth played in a tricky wind Thursday and felt good about getting around in 71. The conditions were calm for most of Friday, with warm, humid temperatures, which led to some good scoring.

Lingmerth, who won Jack Nicklaus' Memorial Tournament in June, added a 70 to his first-round 67 to finish at 137, 7 under par. Spieth was joined at 138 by Scott PiercyandBrendan Steele. First-round leader Dustin Johnson, who shot 6-under 66 in the opening round, was still on the course when play was suspended.

Rory McIlroy, grouped with Spieth and Open champion Zach Johnson, shot his second 71 to finish five strokes back of Lingmerth. Ranked No. 1 in the world, McIlroy is playing his first tournament since the U.S. Open.

"I don't know if it's rust or I just didn't putt well," said McIlroy, whose last tournament round before Thursday was at the U.S. Open on June 21. "I don't really want to blame it on rust. But I didn't putt as well as I would have liked. So maybe work on that a little bit before I tee off tomorrow. ... It would be great to hole a few more putts, because I feel like I'm giving myself plenty of chances."

The third member of the marquee group, Zach Johnson, birdied the first three holes but could do no better than 72, leaving him at 3 over par and in danger of missing the 36-hole cut.

Spieth had no such worries, especially after he holed a bunker shot for birdie at the 18th hole, his ninth. Spieth said he had talked to local caddies and learned that the bunker he hit into always had more sand than others on the course. It helped him figure out the shot, but "I was not looking to make that," he said. "I just struck it absolutely perfectly."

After making the turn, Spieth added birdies at the first, third and sixth holes to shoot a front-side 33 and finish at 138.

"I feel good," he said. "I got a chance to win a major championship. Just thinking about that gets you enough adrenaline to that there won't be any issues."

Ranked No. 2 in the world, Spieth has four victories this year on the PGA Tour, including the Masters and the U.S. Open. He tied for third at the Memorial prior to his U.S. Open win at Chambers Bay, then won the John Deere Classic before tying for fourth at The Open, one shot out of a playoff. Last week he tied for 10th at the WGC-Bridgestone Invitational.

Japan'sHiroshi Iwatashot 9-under-par 63, matching the lowest-round ever shot in a major, the 13th time it has been done at the PGA and 27th time in a major. Iwta, 34, shot a back-nine 29 and needed a birdie at the 18th to shoot the lowest score ever in a major, but settled for par. He rebounded from an opening-round 77.

"The course conditions were very difficult from yesterday and today," Iwata said through an interpreter. "Yesterday the wind was so strong and the greens were really hard that I can't stop the ball with wedges. I could only make a birdie chance one time."

Iwata was a special invitee to the PGA because he was inside the top 100 in the world rankings before slipping to 102nd this week. He has two career victories on the Japan Golf Tour, including this year's Sega Sammy Cup. His only previous experience in major championships came at The Open three times, and he missed the cut on each occasion, including last month at St. Andrews.