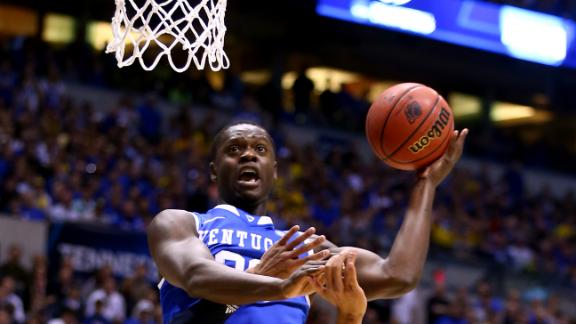 LEXINGTON, Ky. -- Forward Julius Randle will leave Kentucky after one season to enter the NBA draft, where he is expected to be among the top five selections.

With five days left before the deadline for underclassmen to declare, the 6-foot-9 Dallas native announced the decision many expected even before he arrived as part of Kentucky's best-ever recruiting class. Projected as a lottery pick from the outset, Randle solidified his draft stock by leading Kentucky (29-11) to the NCAA final behind a string of double-doubles despite being double- and triple-teamed.

"Kentucky will always have a special place in my heart, but growing up as a kid, there's always been my dream to play in the NBA, and there's no better opportunity for me to achieve that than now," Randle said at a news conference attended by his mother, Carolyn Kyles, and teammates Alex Poythress and Willie Cauley-Stein.

Randle averaged 15.0 points and 10.4 rebounds and was voted to The Associated Press' All-America third team. With Tuesday's announcement, he joins guard James Young, who said last week that he would enter the June 26 draft.

"It wasn't something that we said we were going to do overnight," Kyles said of the decision-making process. "We prayed about it and talked about it for a while and decided this is the best decision for him. ...

"It was important to know their feedback, if they thought he was ready to go out there and contribute to a team. The positive feedback, there was enough of it coming from Coach Cal that we felt this was the right thing to do."

Decisions remain for three more Wildcats freshmen -- twin guards Aaron and Andrew Harrison and center Dakari Johnson -- along with Poythress, a sophomore forward. Kentucky coach John Calipari said earlier this week that he was going to meet with Johnson and Poythress on Monday and with the Harrison twins Tuesday.

Considered the best player of Kentucky's much-heralded eight-man recruiting class that featured six high school All-Americans, the 250-pound Randle was initially described by Calipari as the "alpha beast" of the group, which faced high expectations of winning the Wildcats' ninth title and possibly going unbeaten.

The Wildcats came close to the first goal, overcoming a stretch-run slump to reach the NCAA championship game before they lost 60-54 to Connecticut. Randle had 10 points, six rebounds and four assists in the final, but the Huskies' defense kept him from being a threat in the paint.

The left-handed Randle led the Wildcats in rebounding and scoring and posted a nation-leading 24 double-doubles in spite of opponents' work in limiting his options near the basket.

He scored more than one-third of his 599 points from the free throw line. He also provided one of Kentucky's season highlights in late February with a game-winning putback in the final seconds of a 77-76 overtime victory over LSU, one of many hard-fought games for a gifted yet inexperienced Wildcats squad that needed all season to come together.

Through it all, Randle remained a steady force with physical play that reinforced speculation that he would be among the top players chosen in June.

Jeff Goodman of ESPN.com and The Associated Press contributed to this report.

Julius Randle Going After His Dream
Former Kentucky forward Julius Randle discusses his decision to leave the Wildcats after one season and enter the NBA draft.