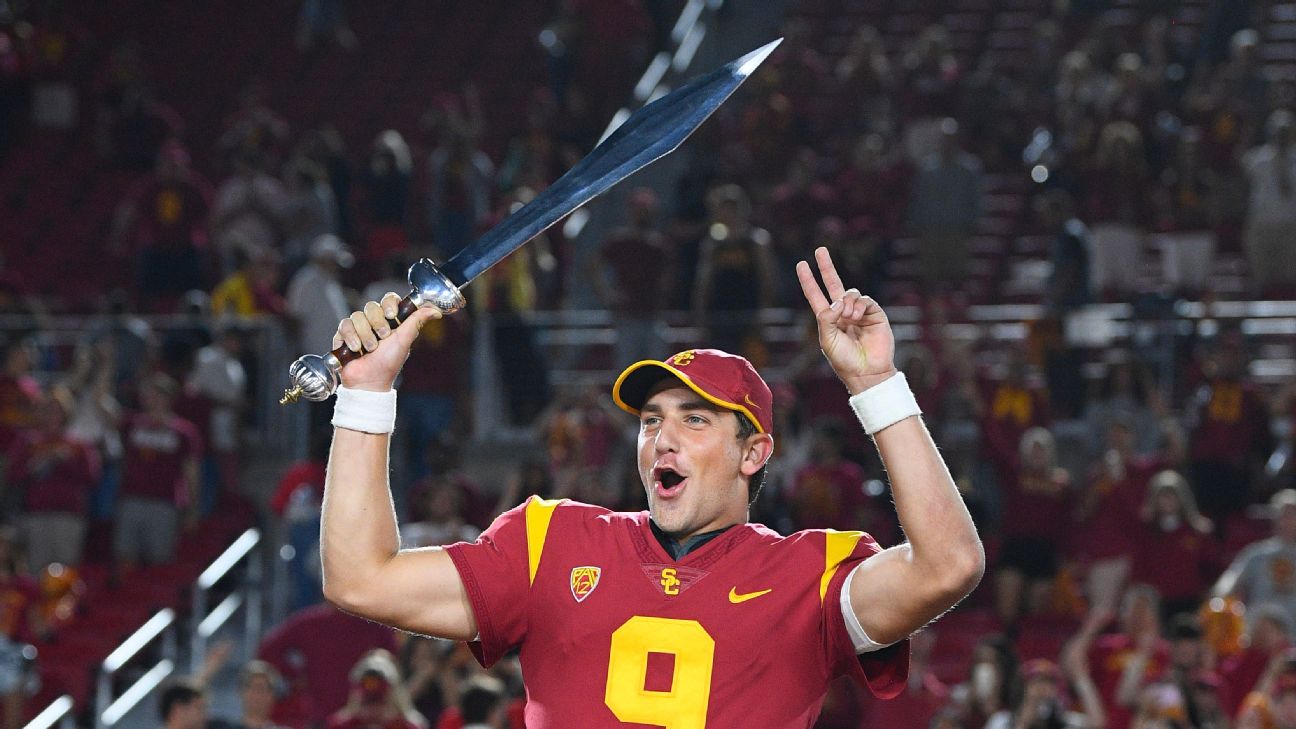 LOS ANGELES -- As he held a Trojan sword in his right hand, made the two-fingered Fight On sign with his left and led the Trojan Marching Band in "Conquest," USC quarterback Kedon Slovis had to feel it was a surreal moment.

Just a week earlier, he had been a mostly anonymous true freshman backup. A year ago to the day, his high school team had lost by 31 points to fall to 0-4.

This new reality could have been a lot for an 18-year-old to take in.

Leading the band in "Conquest" is the equivalent of being named player of the game. It's not a huge deal, but it's considered a nice honor at USC and is the type of moment players remember long after their careers are finished. Sometimes it feels more important than others. In Slovis' case, it reflected a coronation.

The reason for excitement wasn't so much about Slovis' record-breaking debut in the 45-20 win against Stanford last week as it was about the potential future he suddenly represented. USC was dominant and Slovis completed 28 of 33 passes for 377 yards and three touchdowns, making it look easy in the process. If the Trojans could play that well against a team and defense usually among the best in the country, maybe all the doom and gloom from the past several months was unfounded.

For coach Clay Helton, it couldn't have come at a better time.

USC's losing season in 2018 was its first since 2000. That won't generate much sympathy around the country, but that kind of failure led to panic mode for large portions of this particular fan base.

After returning quarterback starter JT Daniels went down with a season-ending injury in the opener, that got taken up a notch. One season-ticket holder even revealed in a letter to the editor of the Los Angeles Times that he had requested a refund of $940 for the remaining five home games. It was likely a fruitless attempt, but the sentiment behind it wasn't uncommon.

For first-year offensive coordinator Graham Harrell, Slovis' debut wasn't exactly cause for celebration because he had decided months ago that Slovis was special. He's been saying it, too, but only now is Harrell finding a receptive audience.

"As far as a passer goes, he's got as good of an arm as I've seen," Harrell said last week. "He can make any throw out there. He can make throws that most people can't make. With him, we just have to do our best to help get him to make the right decisions every time, and if he does that, he's going to be a fun kid to watch."

Harrell's comments last week also allowed for the possibility that USC might be better off with Slovis, not Daniels, on the field.

It was easy to interpret as coachspeak before, but that changed quickly. Then, when asked about Slovis immediately after the game, Harrell's tune didn't have to change.

"From day one, I've tried to tell you the kid is special," he said to a group of reporters, now more eager to listen.

If the game didn't feel like a potential turning point on Saturday, athletic director Lynn Swann's abrupt resignation two days later ensured it will stand as one, regardless of how the rest of the season goes.

In her letter to the university community announcing Swann's departure, new USC president Carol L. Folt made it clear that while it was deemed a resignation, it was her doing. She had a search committee already lined up and spelled out the need for "an experienced and accomplished individual," to take over for Swann, who famously lacked experience relevant to being an athletic director.

Had USC lost on Saturday, connecting the dots between Swann's fate and Helton's might have seemed obvious. After such a dominant, promising performance, however, there's not as much to read into as far as Helton's future is concerned.

In a conversation with Folt early this week, Helton said, he received positive feedback about the team's performance.

"She didn't have to do that, to take the time to reach out to me and say, 'Coach, I love what you're doing, the staff, the players It was so fun to watch last Saturday, and I just want to help you in any way so you and your team can be successful'" Helton said. "That meant a ton to me."

It's fair to allow for the idea that the new athletic director will want a hand-chosen football coach, but if the team replicates what it did Saturday throughout the season, the need for a change wouldn't exist.

Doing that, of course, is still nowhere close to a certainty. The way Slovis and USC played made it easy to significantly raise expectations for how the rest of the year could go. But it was only one game, and USC doesn't have an easy road ahead.

Following the game at BYU on Saturday (3:30 p.m., ABC/ESPN App) -- a potentially difficult game in itself -- USC has a brutal three-game stretch against No. 11 Utah, at No. 23 Washington and at No. 7 Notre Dame.

If Harrell's assessment of Slovis holds up throughout, there will really be something to talk about. 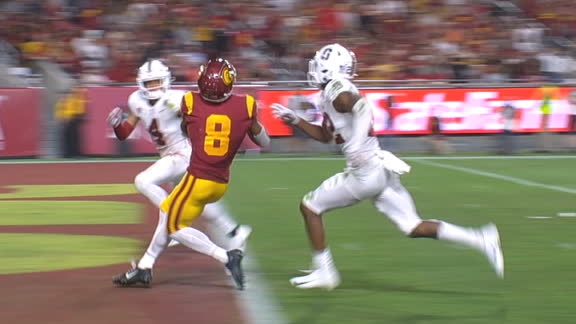