Kevin Love: Feels like LeBron's Lakers 'could do something special' 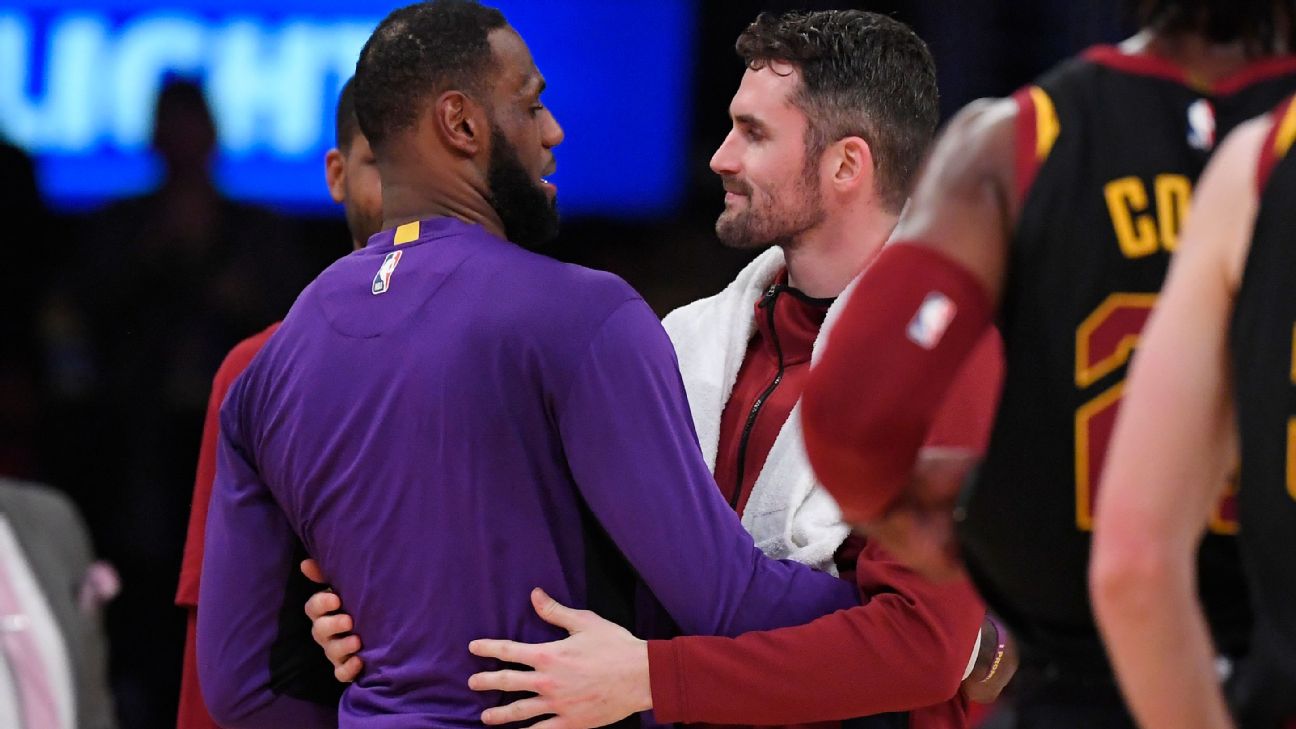 ESPN
By Dave McMenamin
LOS ANGELES -- LeBron James and Kevin Love shared an intricate postgame handshake -- a flurry of patted hands, fist pounds and high-fives -- then hugged and made their way to separate locker rooms.

The Los Angeles Lakers' 128-99 win over the Cleveland Cavaliers on Monday was the first time James and Love had played against one another since James left Cleveland for L.A. as a free agent in the summer of 2018, after injuries caused James to miss one and Love to miss both of the teams' matchups last season.

"It was different because it's been so long and we've been through so many battles with each other," Love told ESPN. "I'm not going to say it felt normal, but I feel like we were both out there competing and playing hard, but seeing him play with that team is obviously different. Especially, even I didn't get to see him with AD [Anthony Davis] and it still feels like they could do something special."

James had 31 points on 12-for-16 shooting and eight assists in Davis' absence, as the Lakers played their third consecutive game without their star big man, who is out with a bruised backside.

Love, who led Cleveland with 21 points and 11 rebounds, was asked whether he had any doubts that James -- after winning a championship with the Cavaliers in 2016 and making it to four NBA Finals in four years in his second stint in Cleveland -- could build the Lakers into a contender right away as he entered his mid-30s.

"Everybody did [have some doubt]," Love told ESPN. "What do they say, I'm not a religious guy, but, 'You want to make God laugh, tell him your plans'? There's no sure thing other than death and taxes, right? Another cliché. But it's true. Who is to know that it will all work out? But they got really fortunate that it's obviously L.A., it's LeBron and they're in win-now mode. They really have a chance."

Cleveland, at 12-28, is in a far different place from the Western Conference-leading Lakers (33-7). The questions surrounding the Cavs aren't about whether they have a chance to win a championship but rather whether John Beilein is the right coach to grow this group during its rebuild, and whether Love and Tristan Thompson -- two handsomely paid veterans with championship experience -- are going to stick around or be shipped out by next month's trade deadline.

James was asked about what his former teammates could bring to another squad should they be traded and bypassed the question, biting his lip and shrugging his shoulders, waiting for another question to be asked.

He was happy to speak about his individual matchup with Thompson, however, one Lakers coach Frank Vogel dubbed "unusual," as he estimated that it was the first time all season that the opposing team's 5-man drew the defensive assignment against James.

"We had a lot of battles in practice before, too," James pointed out. "So 'Double T' is a great defender being able to guard bigs, being able to guard smalls, things of that nature. So just got to try to be very decisive with your moves, don't play around with the ball too much and also be able to finish because he's a really good shot-blocker as well."

Thompson, who had one finish at the rim for a dunk with James in the paint beside him, said he relished the time going against James.

"I just accept the challenge," he said. "It's always fun playing against the best player of our generation, arguably one of the best players of all time, so I love it."

L.A. surged back from a 14-point first-half deficit -- its largest of the season -- and scored 81 points in the second half, the most the franchise has scored in any half in more than 30 years (the Lakers scored 84 in the second half against Portland on Nov. 17, 1987).

L.A. ran its win streak to nine, and Thompson was left with the same impression the rest of the league felt about the Cavaliers during those four seasons he shared the court with James.

"This is a team," Thompson said of the Lakers, "for them, it's a championship-or-bust year." 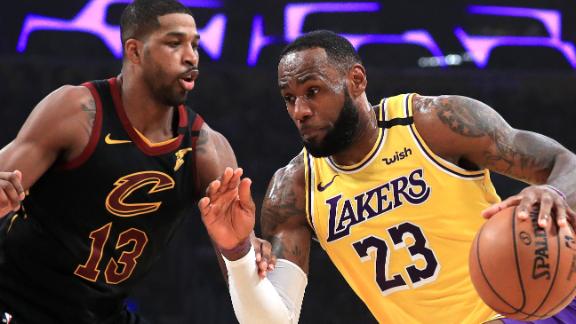