Kevin Love not on trade block now or ever, Cavaliers GM asserts 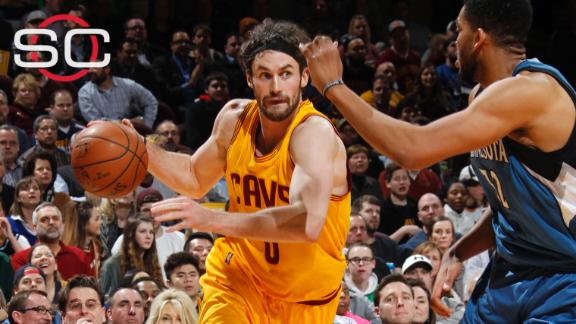 Cleveland Cavaliers general manager David Griffin said Monday that the team is not involved in any trade talks regarding Kevin Love.

"You'd have to go a long way to convince me that we're a better team winning in the Finals without a player like Kevin on our team," Griffin said in an interview on ESPN 850 AM in Cleveland. "We've never once put together an offer involving Kevin, nor have we taken a call on an offer for Kevin."

Love has seen his offensive numbers dip since Kyrie Irving returned from injury last month. Love is averaging 15.6 points, his fewest since the 2009-10 season, and shooting 42 percent, the second-lowest rate of his career.

Those numbers have prompted some speculation on his availability. Love signed a five-year, $112 million deal the past summer and became eligible to be traded on Jan. 15.

Griffin has shown he is not afraid to make major midseason moves, as he executed two major trades in January 2015 and fired coach David Blatt last week. Griffin has said the Cavs are open to making moves, and two weeks ago he completed a minor deal to open a roster spot to use in a possible trade.

The Cavs own three trade exceptions, the largest of which is $10 million, that they could use in a deal. They have the league's highest payroll, at $109 million, and are scheduled to pay more than $65 million in luxury taxes. That could limit them.

"We think very highly of Kevin, and we believe Kevin thinks very highly of this situation," Griffin said. "But I can also tell you that we have been very clear from the beginning that there's no such thing as untouchables.

"You're either all the way in or all the way out in this process, and we believe our guys are all the way in. If it remains that way, then we are going to try and augment the group at the bottom and try to get some additional depth, and that's what we'll do. We're not going to be afraid to do what needs to be done if something more significant comes along."

There are some untouchables on the Cavs roster. LeBron James, J.R. Smith, Matthew Dellavedova and James Jones have no-trade clauses because of the structure of their contracts.

Love's numbers have not been helped by new coach Tyronn Lue's up-tempo style as of yet.

Love finished with just 11 points on 5-for-11 shooting (1-for-7 from 3), six rebounds and two assists in Cleveland's 114-107 win overthe Minnesota Timberwolveson Monday.

That performance was similar to his 14 points on 6-for-12 shooting (1-for-5 from 3-point range), five rebounds and two assists in Cleveland's loss to theChicago Bullson Saturday.

One of Lue's first conversations after taking over as coach of the Cavaliers included telling Love he would get the three-time All-Star more involved with elbow touches so he can facilitate the offense and more post touches so he can score. The problem is that those types of sets require the team to slow down and play more of a half-court game.

"I'm trying to work it out where I can get Kevin in the game without Kyrie and LeBron with that second unit," Lue said.

Lue was unable to get Love as much time with the reserves as he had hoped because Love, Irving and James have all asked for quicker substitutions than he had planned for them, throwing his planned rotations out of whack.

"What I would like to do is get Kevin out early and let LeBron and Ky play, then bring Kevin back with the second unit, and we can kind of run our elbow actions and slow the game down for Kevin," Lue said. "At times, playing fast, I guess he can get lost [in] the offense, so I got to do a better job of that."

"We want to get out and run with that first group, and especially with LeBron and Ky, we're always talking about playing downhill," Love said. "I think we're better when we do that.

"The second unit will be able to play some of that elbow action, and I think that will evolve over time right now. You didn't see it much tonight, but that's something we can continue to work on in practice, and as we get in shape, getting better with those two styles."

Information from ESPN staff writer Dave McMenamin was used in this report.