Kliff Kingsbury is Clay Helton's most important hire at USC 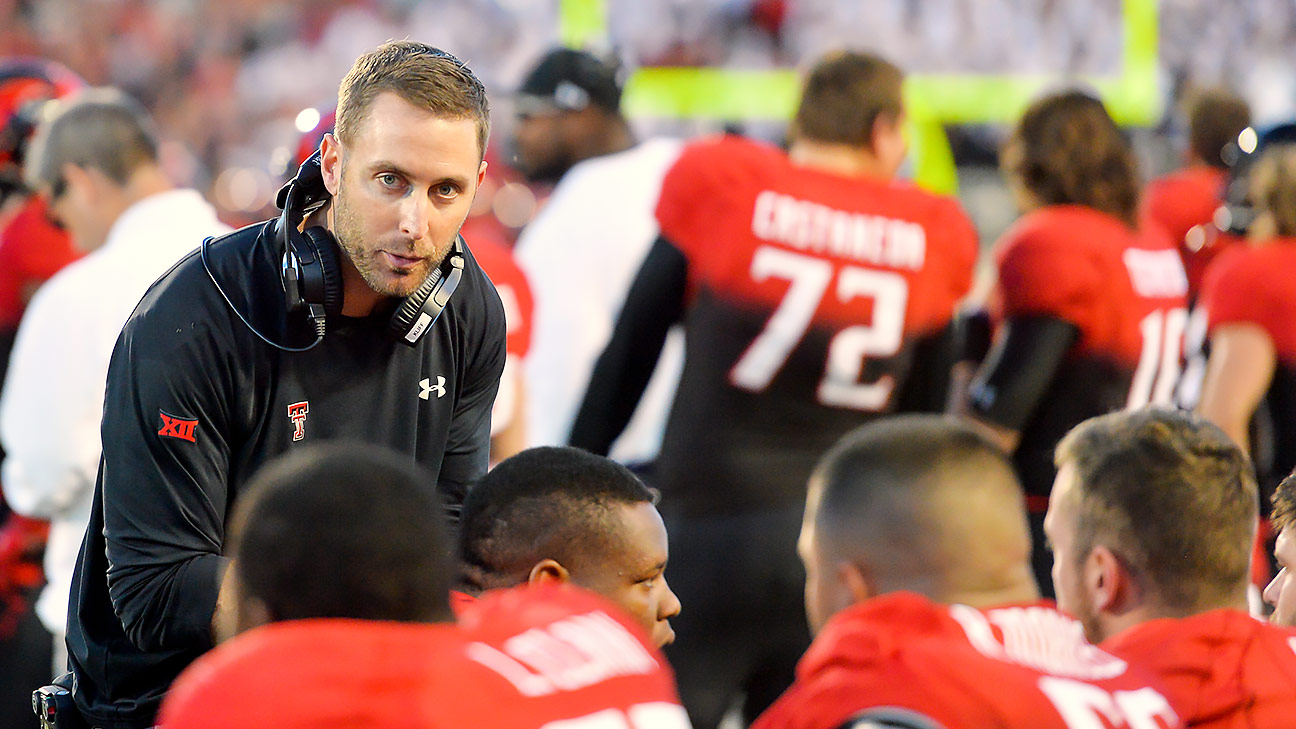 New USC offensive coordinator Kliff Kingsbury is the most important hire Clay Helton will ever make.

That is not because of Kingsbury, specifically, but of what he will represent to Helton's USC career: a possible savior. Helton got his mulligan. He won't get another chance to retool his staff if the Trojans don't show major improvement from this year's 5-7 team. It either works with this new staff or it's over.

In the short term, Kingsbury's arrival is an important win for Helton. He needed to find a proven coordinator to run the offense, and there would have been few demonstrably better options than Kingsbury, who was dismissed as the head coach at Texas Tech last week after six seasons as head coach. Over the past four seasons, the Red Raiders ranked No. 4 nationally in scoring (40.1 points per game), but their inability to stop anyone resulted in losing seasons the past three years.

Landing someone of Kingsbury's stature as quickly as it happened was a best-case scenario for USC once athletic director Lynn Swann announced Helton was returning. Had Helton taken his time and settled on a less reputable coach, it would have only further disenfranchised the USC fan base, which is quickly becoming apathetic.

This is a hire that will inject some much-needed enthusiasm with USC set to open a renovated Coliseum next year.

One of the many criticisms Helton has faced is how heavily he relied on people he knew or had worked with when he filled his first staff at USC. It's a common staffing practice in coaching, but it can also be interpreted, at times, as a lack of ambition. That's not the case here. Kingsbury was expected to field interest from NFL teams and would be a more sought-after coach on the open market than Helton.

What hasn't been spelled out yet is how much autonomy Kingsbury will have running the offense. It would be surprising if he doesn't have full control -- why else would he have taken the job? -- but because Helton is an offensive coach, it will be interesting to learn how the responsibilities will be distributed.

For Kingsbury, it's a unique, can't-lose opportunity.

If USC impresses on offense and has a strong bounce-back year, he will be in line for most of the credit. And if USC has another bad season, it'll fall on Helton. Either way, this doesn't figure to be a long-term partnership.

Kingsbury's arrival represents a sharp contrast with what kind of team Helton envisioned building in 2016, his first full season as head coach.

"[Stanford is] what we try to be: a ball-control, run, play-action offense," Helton said early that season.

Kingsbury's version of the Air Raid offense doesn't get much further from that.

During his tenure at Texas Tech, the Red Raiders ranked third nationally in yards per game (520.2) and second in passing yards per game (379.9). The only team that passed for more yards per game in that span was Washington State, which, of course, is led by Kingsbury's coach from his playing days at Tech, Mike Leach.

If Leach can have WSU knocking on the door of the Pac-12 title and the New Year's Six with that style of offense, then there should be no questions if it can work at USC, where the access to talent doesn't even compare. Not only has it proved to be effective at every level of competitive football, the Trojans' current roster -- heavy on talented receivers with a young quarterback in JT Daniels -- sets up for a relatively easy transition.

The health of USC always has further-reaching effects on the rest of the Pac-12 than any other team. When USC is good, the country has an easier time buying in, and as a result, the rest of the conference benefits.

Had USC gone 10-2 like Leach did at Wazzu this year, there is no question the Trojans would have been ranked in the top 10 and would be on their way to the Fiesta Bowl. WSU landed at No. 13 and in the Alamo Bowl, which pushed each conference team to a lesser bowl.

Kingsbury alone doesn't solve this problem, but the more talented coaches that end up on Pac-12 staffs, the better for the conference. So while this move will likely make USC a more dangerous team to play against, the potential for benefits in other ways certainly exists.