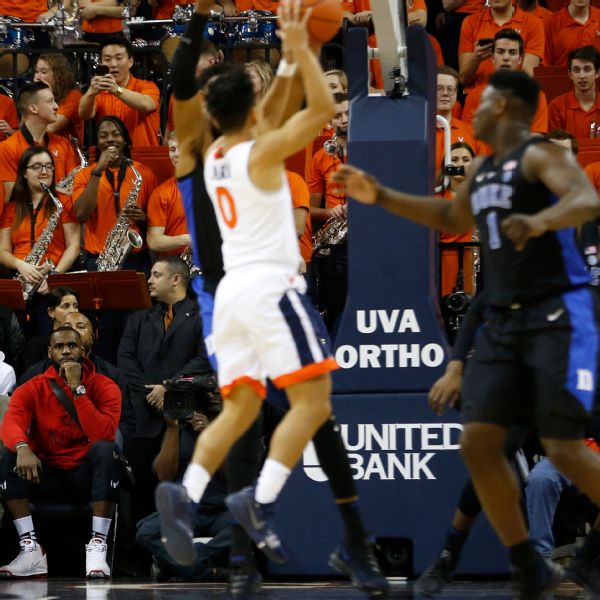 With the NBA descending upon Charlotte, North Carolina, for this weekend's All-Star Game, a topic of conversation among the league's elite will be Zion Williamson, the projected No. 1 pick in the 2019 NBA draft, who is playing his college basketball about 140 miles away at Duke.

Williamson already caught the eye of Los Angeles Lakers star LeBron James, who, alongside agent Rich Paul of Klutch Sports, close friend and associate Randy Mims and Lakers teammates Kentavious Caldwell-Pope and Rajon Rondo, traveled to Charlottesville, Virginia, on Saturday to see Williamson and the No. 2-ranked Blue Devils beat the No. 4 Cavaliers.

"It was a game between the [top] teams in the country," James told ESPN of his decision to jet down from Philadelphia the day before the Lakers played the 76ers. "Coach K [Mike Krzyzewski] is my guy. And the flight was 35 minutes. So, it was easy. It was easy to be able to do it. It was my first time seeing Duke play, I think, in my life. I want to go to Cameron [Indoor Stadium] someday, too, though."

For James, who had superstars like Shaquille O'Neal and Allen Iverson come watch his high school games, it was a chance to bring things full circle.

And while Williamson, and his soaring closeout block on Virginia'sDe'Andre Hunter, stole the show Saturday, James said the entire Duke team was impressive. It's a team that his oldest son, LeBron James Jr., could join someday, having already received a standing scholarship offer from Krzyzewski, according to sources.

"I love what those young boys are doing over there," he said. "I love what Zion andRJ [Barrett] andCam [Reddish] andTre [Jones], I love what they're doing. So, [the trip] was a no-brainer. It was easy."

With his 6-foot-7, 285-pound frame and all-around game, Williamson is drawing comparisons to the 6-8, 250-pound James as one of the best prospects ever to be on the NBA's radar.

"What strikes me? His agility and his quickness," James said. "For his size, how strong he is, to be able to move like the way he moves, he's very impressive. I mean, everybody can see the athleticism. That's obviously, that's ridiculous. But the speed and the quickness that he moves [with] at that size is very impressive."

James also lauded Williamson's maturity, especially with how he responded to Scottie Pippen suggesting last month that he sit out the rest of his freshman season to avoid injury and protect his future earning potential with his draft stock already set.

"I can relate in a sense of he's been covered since he was in high school and everybody is trying to compare him to the next this or the next that. But the best thing I've noticed is he seems like a good kid. He seems like he's got his head on straight," James said. "And when they asked him about, you know, guys in our league and people who cover our league talking about, 'If I was Zion Williamson, I would sit out for the rest of the year,' he was like, 'That's [silly]. Why? I'm here to play basketball. I love to play basketball. I'm here at Duke, I'm having fun. These are my friends. I'm having a great time. Why would I sit out?'

"That's the type of s--- that strikes me. Everybody gets so caught up in the game itself. I look at the intangibles. And he seems like he has great intangibles and seems like a great kid."

James and agent Paul took exception to anyone who thought the visit was a recruiting trip.

"A recruiting trip? I didn't talk to anybody," James told ESPN.

"And he's African-American, too. Throw that in there."

Paul pointed out how perception has changed since he and James attended college games in the past.

"All I care about is respect," Paul told ESPN. "That's all. We were just enjoying a basketball game. Didn't talk to nobody. Didn't do anything or nothing. But it's an issue when you see several media people shining a light on it as if it's a negative thing. But when I was one of his homeboys, one of his 'posse' and we went to see Steph Curry in Detroit (for a Davidson-Wisconsin NCAA tournament game in 2008), nobody said anything. Nobody said nothing."

Paul then discussed the coded language he has heard directed toward him throughout his career.

"Think about it from this perspective," he said. "On one end, you got a 'posse.' Or they're 'leeches.' Years ago it was leeches or 'hanger-ons.' They're OK when they can call you that, but they're not OK when it's a CEO and you have the biggest superstar in the world supporting somebody that he trusts to do his business off the court and just who happens to be a friend."

Since Williamson's game in front of James, the legend of the Duke phenom has only grown. He posted 27 points, 12 rebounds and 3 steals Tuesday in a come-from-behind win over Louisville in a game the Blue Devils once trailed by 23 points. On Saturday, Williamson and Duke host NC State.

There is sure to be plenty of NBA personnel on hand. 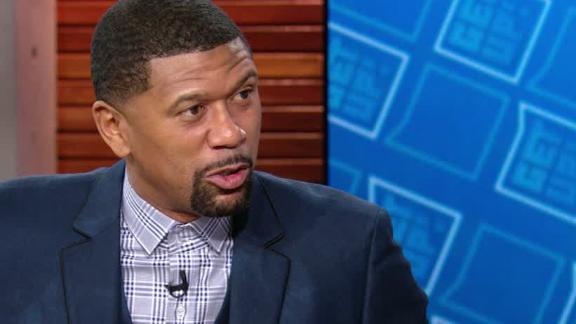 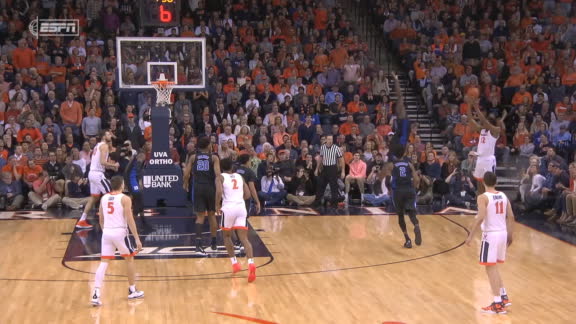 Zion elevates for vicious block
Zion Williamson shows off his athleticism as he hustles back to a wide-open Virginia player and flies for a nasty block. 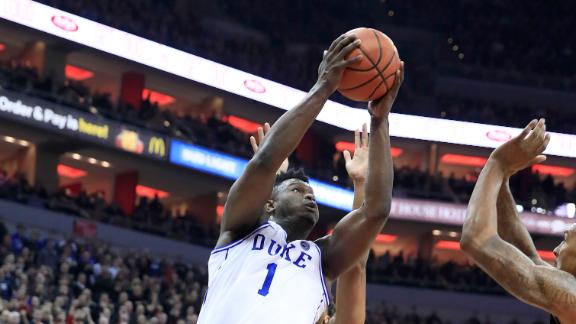