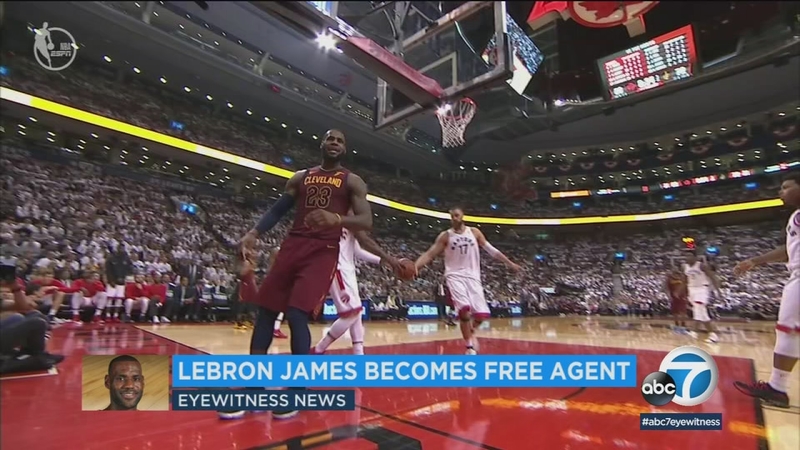 CLEVELAND -- LeBron James made the first move. Decision 3.0 is officially under way.

James told the Cleveland Cavaliers that he is not exercising his $35.6 million contract option for next season and will hit the free-agent market, two people familiar with the decision told the Associated Press.

James had until 11:59 p.m. to express his intentions to the Cavs and his agent Rich Paul informed the team Friday morning, said the people who spoke to the Associated Press on condition of anonymity because the sides are not publicly commenting on moves ahead of free agency opening Sunday.

RELATED: How the Lakers can land LeBron, Kawhi and Paul George

LeBron James speaks about his upcoming free agency, billboards put up by a super fan and why there is interest in him coming to the Lakers.

The three-time champion is now the most coveted prize in an NBA free-agent class that includes All-Stars Paul George and Chris Paul. Teams can begin negotiation with free agents at 12:01 a.m. Sunday.

The decision to decline the option for 2018-19 was expected by James because it gives him more options, which includes him re-signing with the Cavs, who can offer him a five-year, $209 million contract. James can also sign a short-term deal with Cleveland, something he has done each year since returning in 2014.

But there are other teams in the mix for the 33-year-old - and the Los Angeles Lakers appear to be at the top of the list.

With the ability to sign two maximum-contract players, the Lakers can build a "Super Team" with James if they are able to also land George or work out a trade with San Antonio for Kawhi Leonard.

James already has some shallow roots on the West Coast with two homes in the Los Angeles area and a film production company.

The chance to join one of the league's most iconic franchises has an appeal to James, who just completed his 15th season and said following this year's Finals that he remains in "championship mode."

Philadelphia and Houston are also believed to covet the four-time league MVP, who just played in his eighth straight Finals.