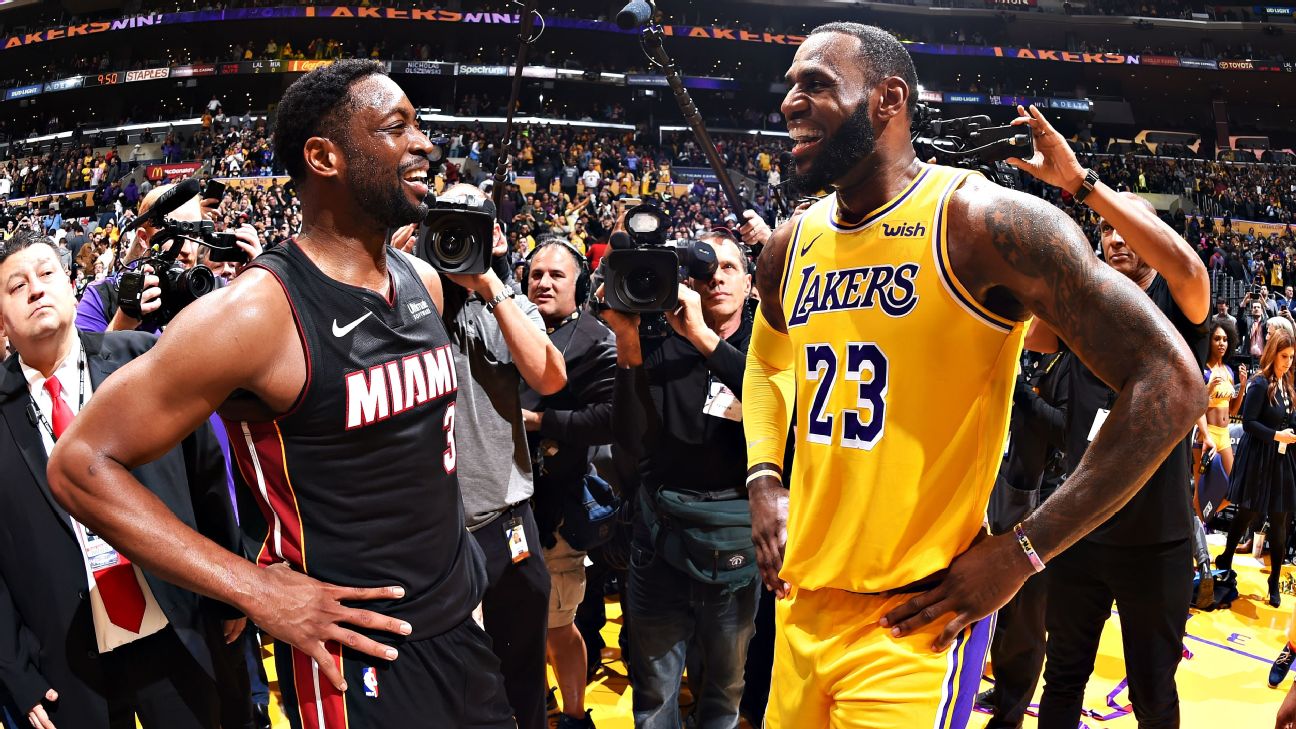 LOS ANGELES -- It came down to the final possession, and LeBron James switched onto his old friend Dwyane Wade, forcing the future Hall of Famer into an off-balance 3-pointer that caromed off the glass and assured the Los Angeles Lakers a 108-105 winover the Miami Heat on Monday in the final regular-season meeting of the pair's careers.

James, set up in the one-on-one duel with Wade,didn't let up. Wade said it was because James knew him so well and had his number.

"He knew my move at the end that stopped me from getting to my shot," Wade said. "That's how well we know each other, man. Just two competitors who enjoy the game of basketball, who love each other and love competing. So I'm glad that in my 16 years that we were on the court together, we was in this game, we've made a big impact on and off the court."

Wade's self-proclaimed "One Last Dance" before he retires at the end of this season, his 16th in the NBA, produced one last enduring moment for the rivals who for a brief stretch of their careers were teammates, as James edged Wade in their 31st and final showdown.

James scored 28 points, and the Lakers survived Wade's 15-point performance in the second half.

"Sixteen-fifteen!" James said with a smile as he iced down his 33-year-old legs postgame, referring to their head-to-head career record. "Whoo! I got some bragging rights ... that I will not use."

After the buzzer sounded, they shared a hug and a chat to close perhaps the final joint chapter of two careers that have intersected repeatedly since they entered the NBA together in 2003.

"I knew at some point after the game it was going to hit me that this would be the last time we was competing against each other, and it hit me right away once the buzzer sound," Wade said. "And we got an opportunity on the court just to look at each other and be like, 'Man, this has been fun, this has been one helluva ride,' and we've enjoyed it together."

Wade and James teamed up with the Heat in 2010 to win two championships and reached four consecutive NBA Finals, and they spent half of last season together in Cleveland.

"Obviously, without D-Wade in my career, I wouldn't be sitting here with this résumé that I have," James told ESPN before showering and dressing for a postgame dinner with Wade. "Individually, I think I would still be doing my thing individually, but as far as me accomplishing the team goals that truly mean most to me? Twenty-seven wins in a row. Four straight Finals. Two back-to-back championships. It goes without saying. I wouldn't be able to accomplish it without him."

In Wade's final game in L.A., the Staples Center sent him out in style, with multiple standing ovations and a tribute video in the first quarter.

"Some people say you shouldn't be friends with your competitors because you still can't compete," James said. "And I think people have seen that and recognize that even with our friendship, we competed against each other, we pushed each other when we were playing against each other."

James and Wade both missed big shots down the stretch, but James hit two free throws with 22.5 seconds left to stretch the Lakers' lead to three points.

Kyle Kuzma scored 33 points for the Lakers, who have won 13 of 17 overall and five straight at home.

Wade's wife, actress Gabrielle Union, was among the fans courtside as the high-scoring guard played 32 minutes. Wade went 0-for-5 in a scoreless first half but had six assists. He got rolling in the third quarter with eight points in a flurry that recalled his heyday, and he kept up the pressure in the fourth while finishing with 10 assists and five rebounds.

James, speaking to ESPN, recalled a vacation that he and Wade took with their wives to the Bahamas in the summer of 2011 after the Heat lost to the Dallas Mavericks in the Finals to sour their first season together in Miami. If not for the conversation they had as a group, maybe James wouldn't have reached his current stature among the all-time greats.

"They got on my ass," James said. "My agent, Rich Paul, and D-Wade and even Gab and my wife, they got on me.

James remembered the first time he ever noticed Wade play -- when Marquette faced Louisville during Wade's sophomore year. "He tore their ass up," James said. "I was like, 'Oh, he's going to be a problem.'"

When James saw Wade drop a triple-double on Kentucky in the 2003 NCAA tournament, he was fully on notice. "I was like, 'Oh, s---, that guy's special.'"

The Cavaliers selected James No. 1 in the 2003 draft. Wade went No. 5 to Miami. They battled it out in the Eastern Conference until James joined the Heat as a free agent in 2010.

"Obviously we didn't know that seven years later that we would become teammates, but for the first seven years, we just pushed each other every single day, watching each other from afar," James said. "When we played against each other, you just felt like it was destined for us at some point to team up, possibly. And the first time we teamed up, obviously it was with the USA team [at the 2008 Beijing Olympics] and how amazing that was and how our chemistry was just off the charts for those 37 days that we were together."

James left the Cavs the first time as a two-time league MVP but with an 0-1 record in the Finals, still searching for his first championship.

"I came to a point where I felt like I needed more with my career. I needed to be with guys that I could see eye to eye and try to get to a point in my career of what I sought out to do, and that's to win at the highest level," James said. "So for me to go to Miami and for him to open the door to that city, open the door to that franchise and then to eventually give me the keys to the franchise, give me the keys to the city, it just shows you how selfless he is and how much more of a person he is than just a basketball player. And then, I mean it goes without saying, what we were able to accomplish on the floor. It was instant chemistry. There's no way we were going to be able to fail. We lost two championships, but we didn't fail. There was no way we were going to fail because our chemistry goes beyond just basketball."

Their basketball journey took them literally all over the world together, and it ended in Los Angeles on Monday with the final seconds ticking off the clock in a one-possession game.

"I wasn't supposed to be matched up versus him, but I made the switch. I mean, it was only right," James said. "And obviously he checked me the last offensive possession that we had down there as well. It was only right. And I told him, I said, 'What's the odds that our last game would be in an environment like this?' He was like, 'Thank you for coming here because our last meeting is in Staples Center.' I said, 'There's only two places that could have ended it: It's here and Madison Square Garden.' And I felt like here is even more [appropriate] because of the star power. And for us to be throughout this journey our whole lives and for us to have that final possession and us have those moments in the game, Staples Center is a place that appreciates that."

When the game ended, James and Wade shared an embrace and exchanged their uniforms, a ritual Wade has been doing with other stars around the league as his final season marches on.

James was asked how Wade should be remembered. While stressing that he plans to get Wade out to L.A. next year to start his retirement by working out with James at the Lakers' practice facility to keep him around basketball, he said his friend's legacy is already written.

"He's a three-time champion. A Finals MVP. Gold medalist," James said. "I mean, I don't know. However you want to remember him -- an unbelievable father. A guy who gained custody of his kids, how incredible is that? They don't talk about that enough. Had a paternity leave this year. He just did it his way.

With that, James ripped the ice bags off his knees, a ritual he will keep doing countless times with three years left on his contract with the Lakers, while Wade steps away from the game. 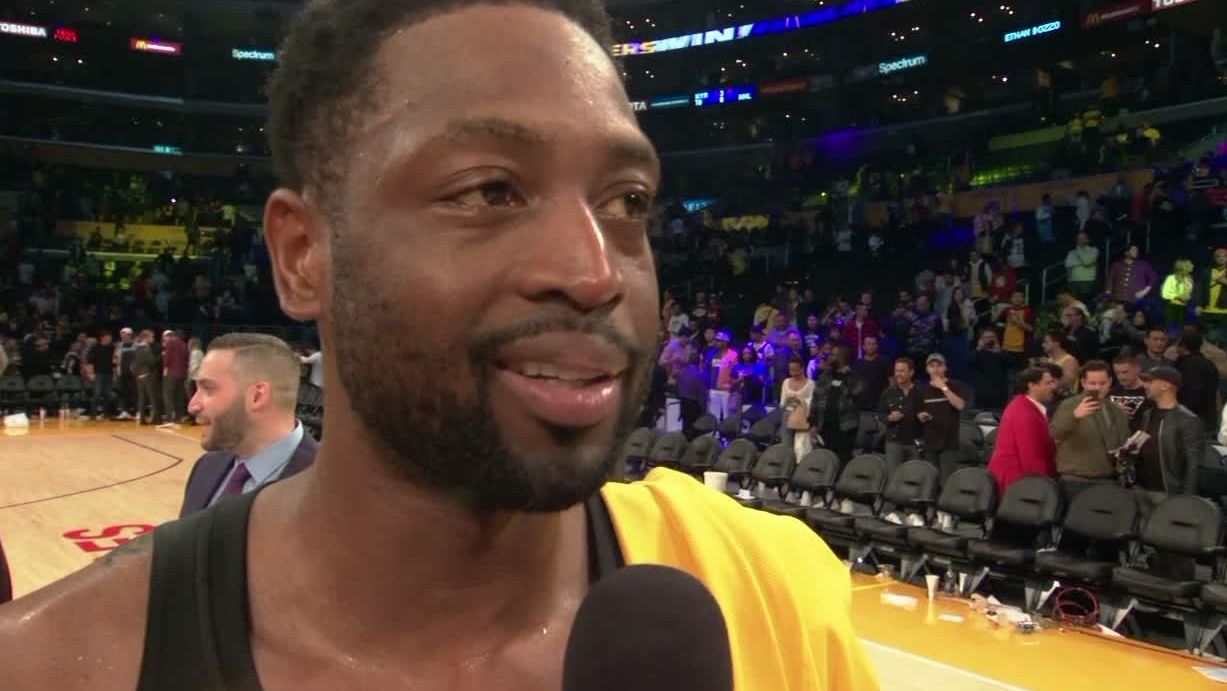 Wade 'thankful' for LeBron on and off the court
Dwyane Wade talks about his relationship with LeBron and how after the final buzzer sounded it was emotional knowing the two wouldn't face off again.