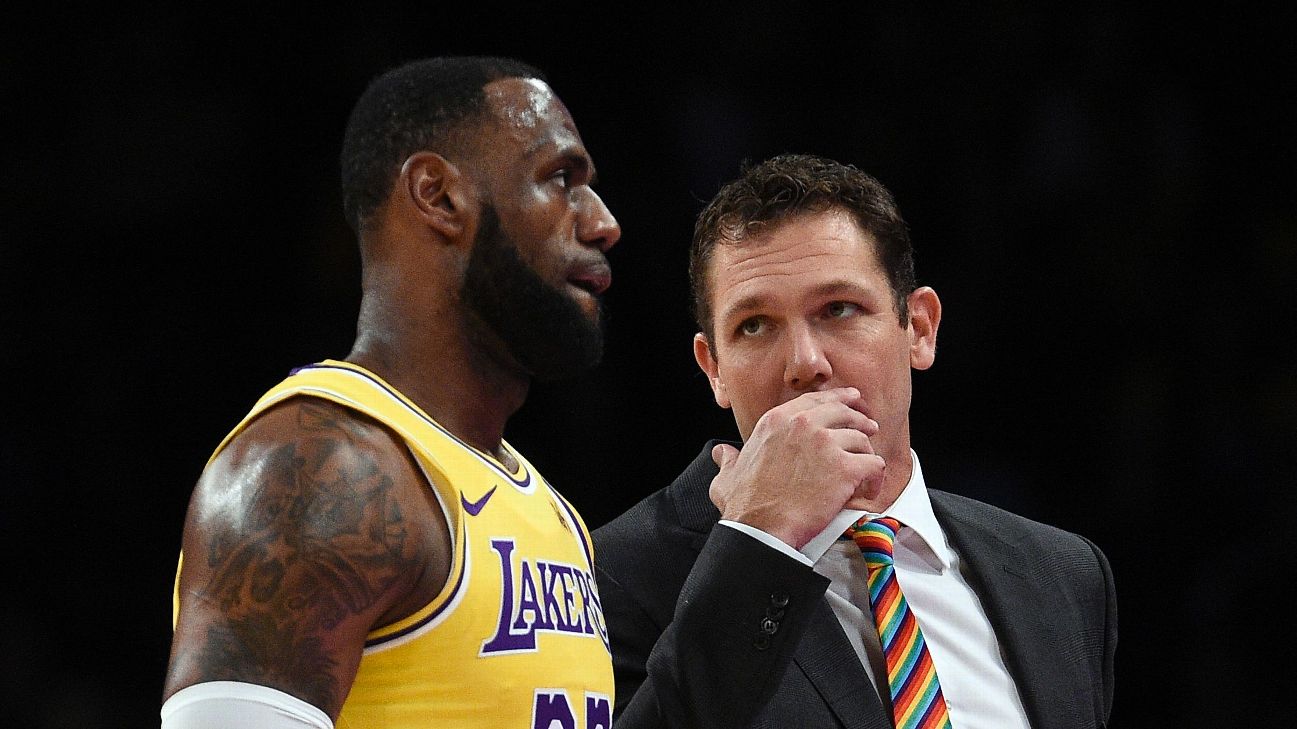 MIAMI -- When Erik Spoelstra looks back on his first season with LeBron James, the Miami Heat coach remembers trying his best to not get in the way.

"I was just trying to not screw it up," Spoelstra said of the 2010-11 season when James and Chris Bosh teamed up with Dwyane Wade in what was then Spoelstra's third season as head coach. "And I was in survival mode. I didn't want to get in the way and I found a way to get in the way. And we lost [to the Dallas Mavericks, 4-2, in the NBA Finals] our first year."

Now, Luke Walton finds himself in a similar situation as Spoelstra did: coaching James in the star's first season with a new team while Walton enters only his third season as a head coach. Spoelstra, though, gave Walton an emphatic endorsement as "the perfect guy to coach" the Los Angeles Lakers and James.

"I told [Walton] the same thing I'll tell everybody else," Spoelstra said before James scored 51 points against his former club and the Lakers beat Miami 113-97 on Sunday night. "He's the perfect guy to coach that team. He has purple and gold bleeding from him. He is a Laker. He did a tremendous job with Golden State when he had to take over for Steve [Kerr].

"And if you look at his whole professional career, all of [it] he has been involved with are teams like this with great expectations, with a lot of pressure and a lot of noise," Spoelstra continued. "He doesn't know any different. I don't think you can find a better fit to coach that team."

Shortly after the Lakers signed James in free agency, Walton reached out to some of James' former coaches, including Ty Lue and Spoelstra.

"We had a really good talk," Walton said of Spoelstra. "We talked for a couple hours. And he was great."

Walton and Spoelstra not only were entering their third seasons as head coach when they first coached James, but both got off to bumpy starts with the star. In Miami, James and Spoelstra started off 9-8 before winning 12 straight and eventually going to the NBA Finals.

Coincidentally, in James' first season in Miami (2010-11), his first season back with the Cleveland Cavaliers (2014-15) and now his first year in Los Angeles, the All-Star's teams started all three seasons 8-7.

There was plenty of tension during that start in Miami as James famously bumped into Spoelstra during a timeout. The Lakers have had their share of drama early as Magic Johnson, the Lakers' president of basketball operations, chided Walton during a meeting after the team opened 2-5.

Walton also has had to endure multi-game suspensions to Rajon Rondo and Brandon Ingram for a fight with the Houston Rockets in the second game of the season and Rondo now having to miss perhaps a month or more with a fractured third metacarpal in his right hand.

Spoelstra, though, not only thinks things will stabilize under Walton's guidance given Walton's championship resume as a player under Phil Jackson and assistant under Kerr, but because of James' greatness.

"He's timeless," Spoelstra said of James, who entered Sunday averaging 27.3 points, 7.7 rebounds and 7.2 assists. "... I just think you can book it every year -- 27, 8 and 7. Doesn't matter what uniform, doesn't matter what year, doesn't matter how old. Consistency is as much of a talent as any physical or mental talent, and he's five-star in all of those."