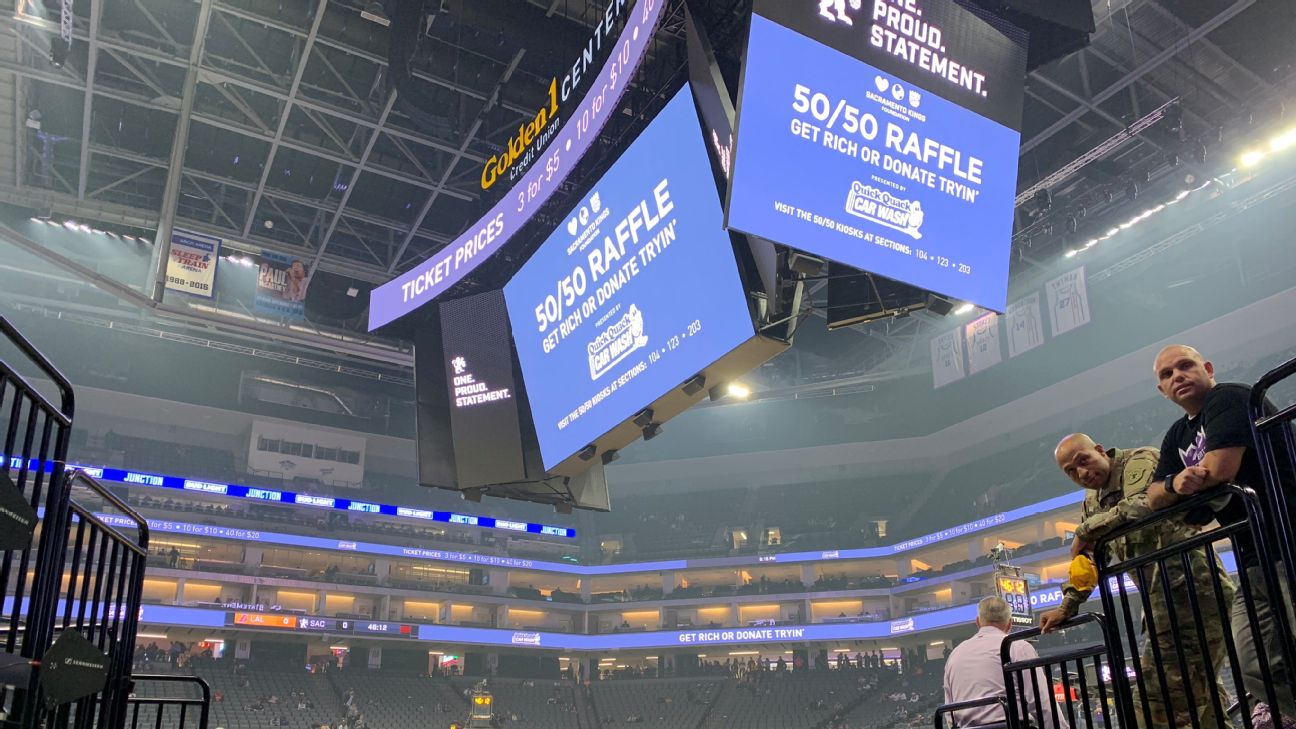 SACRAMENTO, Calif. -- Smoke from a wildfire raging in Butte County -- known as the Camp Fire -- billowed into downtown Sacramento and was visible above the court at the Golden 1 Center before and during theKings' game against the Los Angeles Lakers on Saturday.

"We are aware that there is a smoke problem," a Kings spokesman told ESPN shortly before tipoff.

To combat the conditions, arena workers manning the entrances where ticket holders arrived were instructed to keep the doors closed as much as possible during the pregame window, the spokesman said.

"Not to sound dumb, but this kind of snuck up on everybody," Kings coach Dave Joerger said. "From wherever you're coming in from [you notice the smoke]. Today, I immediately started calling our staff: 'How bad is it downtown? What's going on here?' It's just a really sad deal."

The fire began Thursday and has already destroyed the town of Paradise, resulting in the deaths of 23 people, according to Butte County Sheriff Kory Honea.Two people were found dead in a wildfire in Southern California, bringing the total number of fatalities in the state to 25.

Several members of the Lakers said they could see the fire burning from the plane on their flight from Los Angeles to Sacramento on Friday.

A faint, hazy smoke was visible in the arena at shootaround Saturday morning.

"You can smell it," LeBron Jamessaid before the game. "We haven't really gotten up and down [running] like that to the point where you can tell it affects you or not, but anytime smoke is around, you know it can affect all of us. Not only us as athletes but everyone. Everyone gets affected by pollution."

"I had a slight headache before the game," James said. "And I can't pinpoint any other reason why it was going on besides the smoke. But it went away after the game started. Hopefully I'll be able to get some good rest tonight."

"My stomach was hurtin' like I was hungry or something, but it was from the smoke for sure, so ... but we still won, though, so it's all good," he said.

Joerger said the Kings were monitoring the situation from noon until tipoff at 7 p.m. PT.

"I'm no scientist, but smoke goes to the lowest places, doesn't it? Like it's heavy?" Joerger said. "And it's coming in through the parking ramp, and I'm interested to see [its presence during the game]."

One arena staffer told ESPN that the haze in the arena's upper bowl was atypical and not something that occurred when wildfires blazed through Northern California last season. Before tipoff, several blocks from the arena, a civilian could be seen walking the streets wearing a surgical mask.

"Breathing, it's a little bit muggier," Lakers forwardKyle Kuzma told ESPN before the game. "You can kind of feel that from the jump."

"Climate change, or I don't know what it is, but there's a lot of them coming," Kuzma said.