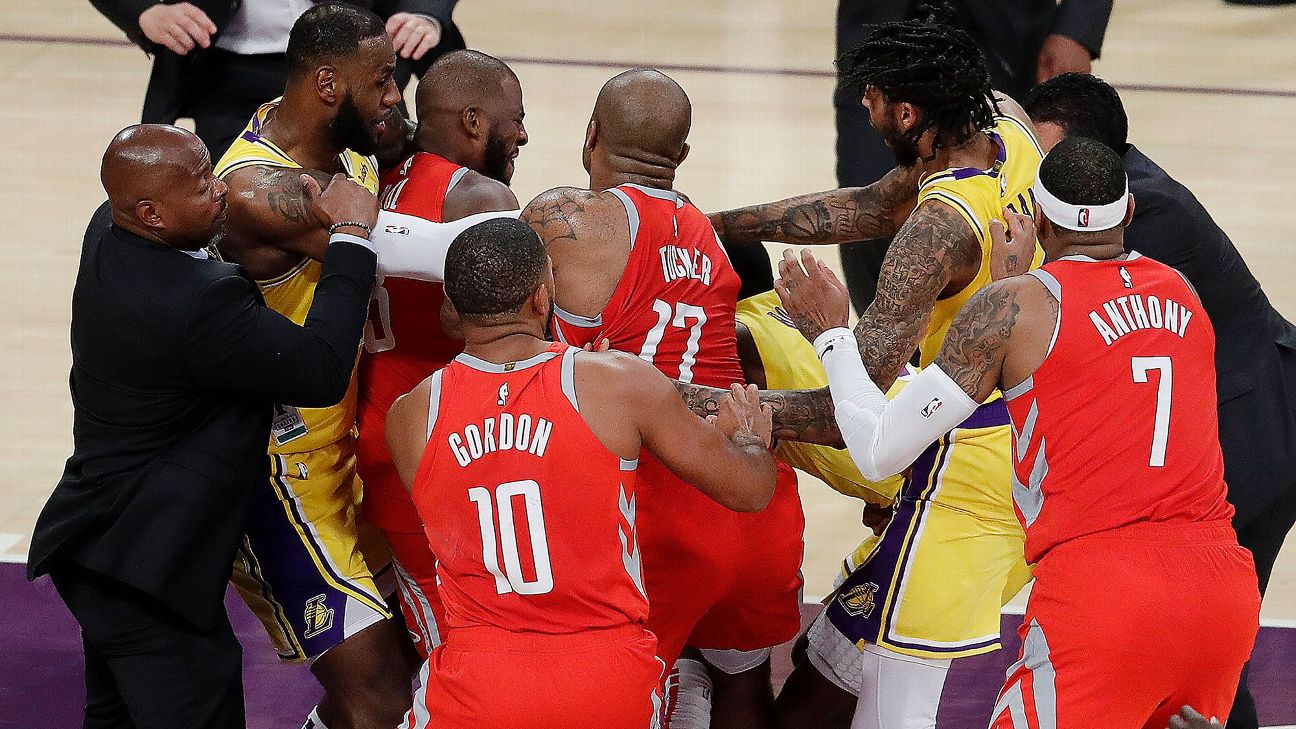 So said Ice Cube as he concluded the opening invocation that greeted fans on the video screen as they filed in from the buzzy concourse into the bowl at Staples Center. Among the promises offered to those in attendance were "the dawn of a new kingdom" and the restoration of Showtime. The monarch in question, naturally, is LeBron Raymone James Sr. And with his arrival in Los Angeles, basketball's most prominent star is now the face of the NBA's premier franchise.

For about two hours on Saturday, the electric current pulsating through the arena during James' regular-season premiere in a Lakers uniform appeared to be the NBA at the height of its cultural power. If the league could order up a custom product for the global masses, might it be a rapid-fire shootout featuring its global star on its global team, facing an opponent with a presence such as the Rockets, led by the reigning MVP?

Then, with just over four minutes remaining in a one-point game, the Lakers' welcome wagon was hijacked by fisticuffs. In a league whose players reputedly never truly want to fight, this game was abruptly rattled by a melee that saw three players land close-fisted punches: Brandon Ingram (who started the brawl with a shove of James Harden) and Rajon Rondo of the Lakers, as well as Chris Paul of the Rockets. After players were separated multiple times as emotions continued to run hot, officials took several minutes to adjudicate the incident. All three players were ejected and face certain suspensions.

If James started the night as the game's honoree, he ended it as its peacemaker. While tempers festered, James could be found with his arms around his close friend Paul in an effort to de-escalate the madness. LeBron has always thrived in chaos, but Saturday night's delirium was a little too much drama even for him.

As is so often the case in today's NBA, the scripted events on Saturday night were subsumed by the spontaneous and the absurd. No league in recent memory has generated more excitement from its unrehearsed, reality-show escapades. The Lakers tried to orchestrate a showcase of their showtime revival, but the garden party was crashed by vagrants. The Rockets pulled away in the moments following the fracas for a 124-115 win, dropping the Lakers to 0-2.

The skirmish reaffirmed that the league would be hard-pressed to find a pair of irritants more provocative than Harden and Paul. Both are first-ballot Hall of Famers, and both are fluent in the psychological warfare required of teams who have championship aspirations. Saturday's home opener against a 65-win team was always going to be a worthy measuring stick for a newly constituted Lakers team gauging its potential. But the altercation underscored a larger lesson for a player such as Ingram, who is just starting his third NBA season: Winning in the NBA can be an ugly business.

LeBron, of course, knows this better than anyone. Whatever his presence in Los Angeles might mean to the brand appeal of the NBA, the Lakers and LeBron, basketball is still an on-court product measured in wins and losses. LeBron -- who dropped 24 points, five boards and five assists -- will undoubtedly make every Lakers game watchable, but now he's charged with the responsibility of making every game winnable.

There's generally not a lot to glean from October basketball, but some things don't change even if the uniform or conference does. The gravity James directs from the opposing defense could be seen on Saturday night, as multiple Rockets zeroed in on him on every half-court possession. This is a condition that's compounded by the lack of shooting on the floor for the Lakers, yet James made the best of it -- witness the exquisite, no-look bounce pass to a cutting Josh Hart along the baseline just before halftime.

James radically changes the style and identity of any team he joins, but through two games, the Lakers appear like a slightly more advanced model than the feisty but deeply flawed team that won 35 games last season. The characters -- and there are no lack of them on this roster -- are different, but this is still a squad that excels at running out, yet little else. It suffers from lack of discipline defensively and doesn't shoot the ball with any kind of proficiency from long range. In Saturday's loss, the Lakers tried to compensate by hunting for mismatches against the Rockets' switch-happy scheme, but JaVale McGee post-ups offer limited appeal.

This season's Lakers are undeniably better than 35 wins, and any roster with a composition this new will need some time to jell, as James' first Miami Heat team pointed out with regularity through the fall of 2010. This team is also preaching patience -- a big theme after the loss at Portland on Thursday -- as LeBron cautioned that building a winner is a far lengthier process than whipping up instant oatmeal, a league-average breakfast that provides basic sustenance but little else.

The Lakers want nothing less than the full spread, the well-polished cutlery, on the roof deck at sunrise, overlooking their new kingdom.

Punches thrown, Rondo, CP3 and Ingram tossed
James Harden gets shoved by Brandon Ingram going up for a basket, leading to Rajon Rondo, Chris Paul and Ingram throwing punches, with all three ejected.

LeBron's home debut ends in defeat
LeBron James makes his much-anticipated debut at the Staples Center, scoring 24 points in the Lakers' 124-115 loss to the Rockets.

LeBron feeds KCP for layup
LeBron James finds a cutting Kentavious Caldwell-Pope, who eases in a layup off the glass. 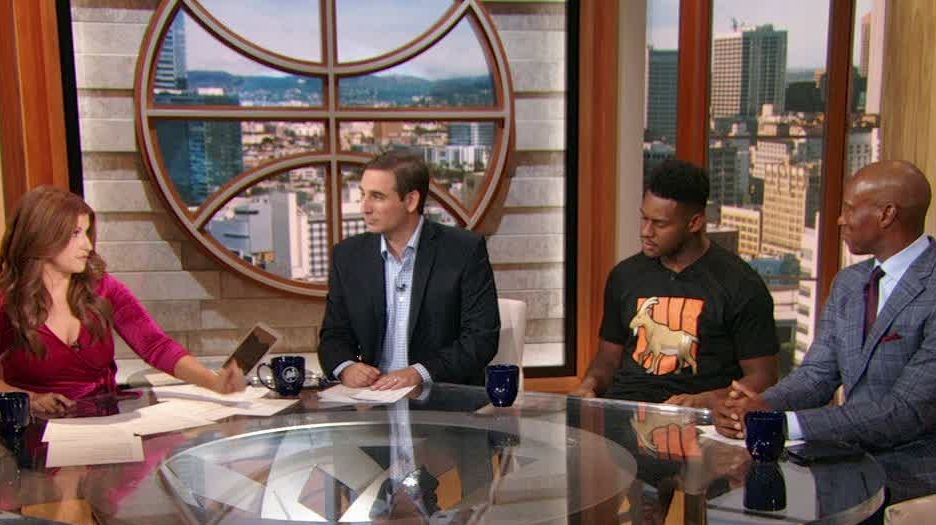