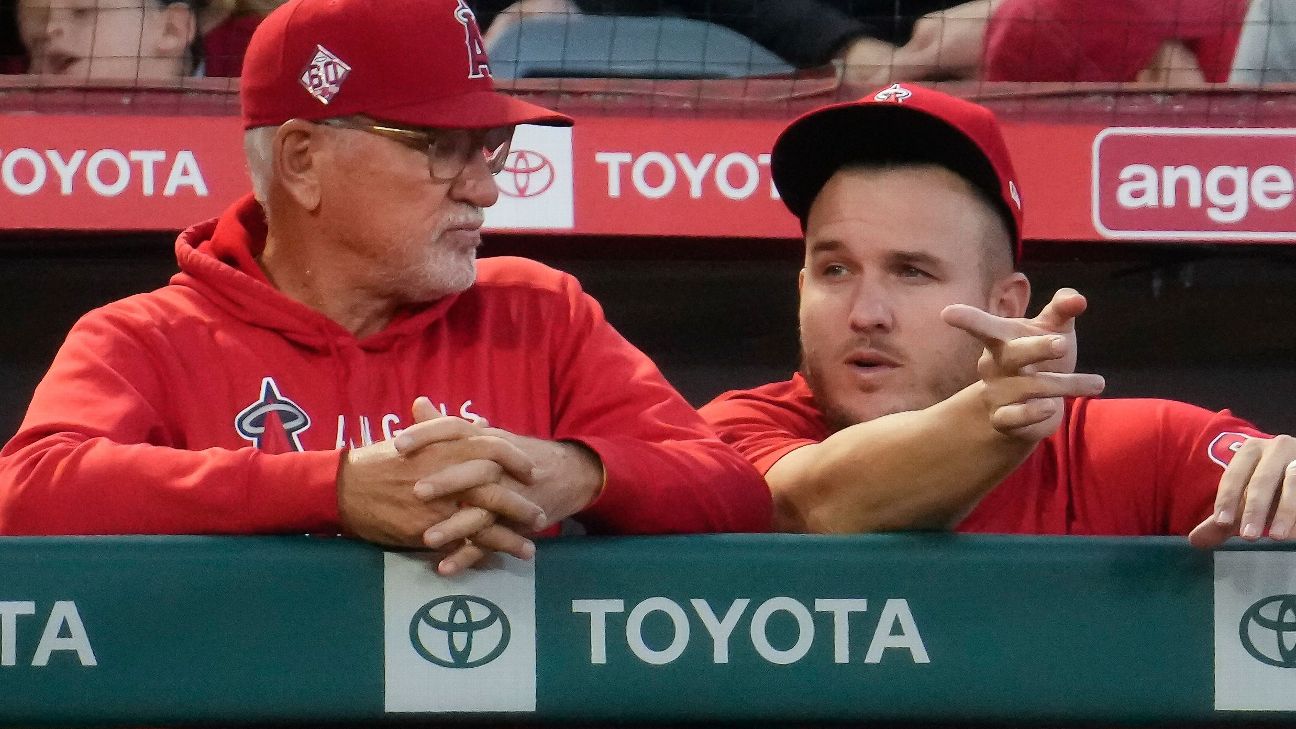 TEMPE, Ariz. -- Spring training is moving unusually fast this year, and that is especially true at Los Angeles Angels camp. The possibility of Mike Trout moving off center field and into a corner-outfield spot lasted less than 24 hours.

Angels manager Joe Maddon floated that as a possibility during his first media session on Sunday afternoon, explaining it as a better way to preserve Trout's body after he spent the past 4 months last season recovering from a calf injury. But then Trout reported to camp on Monday morning and expressed a desire to remain at his natural position.

Trout, who spoke to the media a couple of hours before Maddon's session, expressed surprise upon hearing the news on Sunday and had what he descried as a "lengthy" meeting with Maddon and Angels general manager Perry Minasian the following morning. In it, he reiterated his commitment to center field, at least for the foreseeable future, and also asked where he needs to improve to ensure that remains the case.

"I want to play center field, obviously," Trout said. "We had a great conversation about it, and we'll go from there."

Trout, 30, is a three-time MVP who finished within the top five in voting for the American League award in each of his first nine seasons. During that stretch, from 2012 to 2020, Trout accumulated 74.8 FanGraphs wins above replacement; nobody else registered more than 47. But Trout's 2021 season was limited to 36 games in 2021 after he strained his right calf while running to third base on May 17 and never fully recovered.

"I can't really point to one thing," he added. "We threw everything at it. And basically when I was shut down, I didn't do anything. I let it heal on its own for a few weeks. I got back into my training right away, and the first week, probably two weeks, I felt like a little tightness in there, and then it went away. I haven't thought about it since."

Trout felt as if he had completely healed by the middle of October and eventually went through his normal offseason training. He reported Monday to having "no setbacks" and said this is "the best I've felt in a while."

"I try to be the best player on the field at all times," Trout said. "That's my mentality. The biggest thing, obviously, is staying healthy. And I'm gonna do everything I can to do that."

A Gold Glove is the only major award Trout has yet to win, but he has come close in prior years. He ranked within the bottom 18% of qualified center fielders in outs above average three times in four years from 2016 to 2019, but he was 15th in 2018. Scouts have long stressed the need for him to improve on jumps and don't consider his arm a weapon, even though it has significantly improved since his rookie year. But Trout has always shown the explosiveness and physical skills to be a dynamic center fielder, a trait that has shown up in his assortment of robbed home runs.


"I feel comfortable out there," Trout said of center field. "Natural."

The Angels employ two promising young outfielders in Jo Adell and Brandon Marsh, the latter of whom would have been the front-runner to play center field. Justin Upton, who mostly plays left field, also remains with the team and is owed $28 million in 2022.

The Angels' desire to move Trout isn't rooted in performance but more so on a desire to preserve his body and keep his bat in the lineup, considering Trout is owed nearly $320 million over the next nine years. Trout said Maddon might have briefly broached the subject of left field with him in the dugout last year. But that conversation -- if it even took place -- wasn't enough for Trout to spend time working out there during the offseason, when a 99-day lockout that lasted from the morning of Dec. 2 to Thursday afternoon prevented teams from communicating with their players.

Maddon blamed the lockout for the lack of communication but said they cleared it up quickly.

"We talked about it -- he's fine," Maddon said. "He and I have spoken about it in the past. He belongs out there. As long as he feels good, he belongs out there. We feel good about it. He said he feels in great shape, and he's eager to get back out there, so I'm happy about that."
Report a correction or typo
Related topics:
sportsespnnewsmlbmike troutlos angeles angels
Copyright © 2022 ESPN Internet Ventures. All rights reserved.
TOP STORIES
Villanueva's former top aide admits belonging to alleged deputy gang
UPS driver, 24, collapses, dies in SoCal heat
Uvalde school police chief resigns from city council
New Glassell Park restaurant at center of gentrification debate
14 suspects grab and run out with merchandise from Century City mall
California bid to create legal drug injection sites advances
Flight delays ease up Saturday during chaotic travel weekend
Show More
Fewer young Americans want to serve, due to obesity fewer qualifies
4th of July fireworks in Southern California: Where to watch
Disneyland replacing Splash Mountain with Tiana's Bayou Adventure
Teen girl speaks out after surviving shark attack at Florida beach
Experts set expectations about 'vaccine efficacy'
More TOP STORIES News