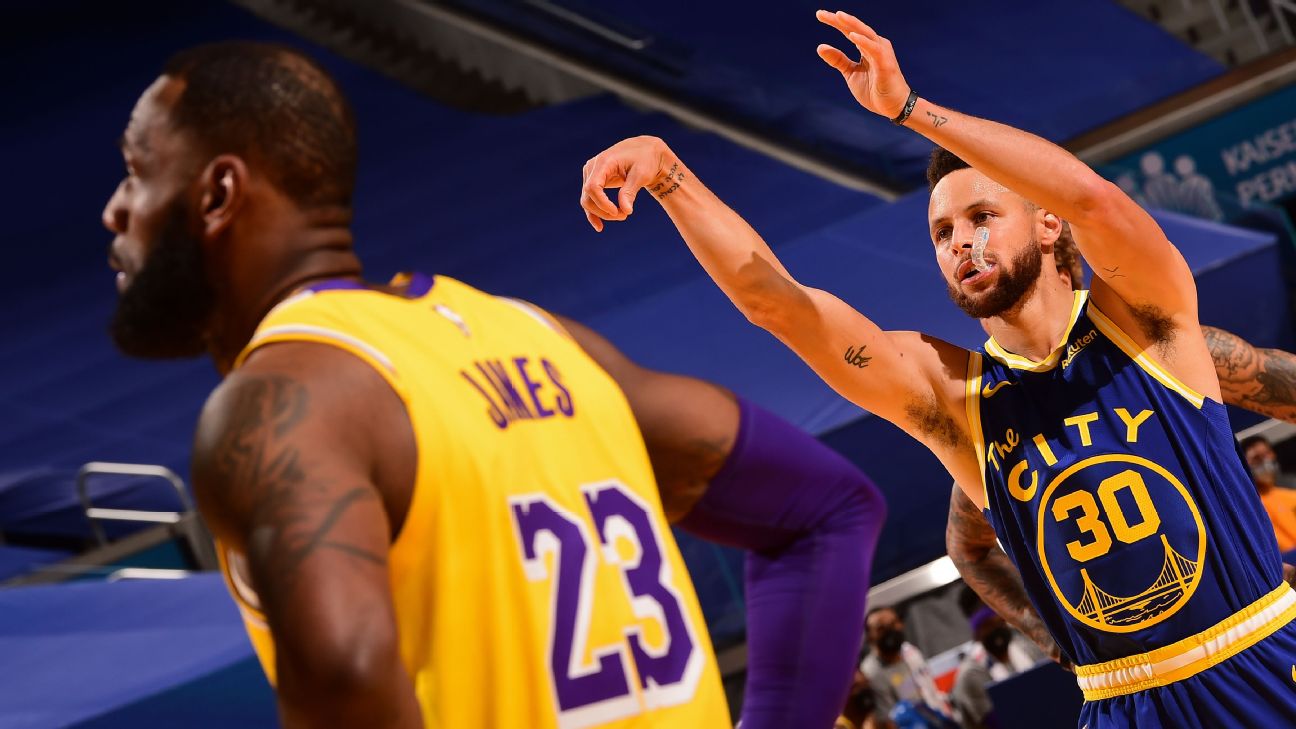 LOS ANGELES -- TheLos Angeles Lakers' defense, ranked No. 1 in the NBA during the regular season, will be tested by the league's leading scorer, Stephen Curry, right away in Wednesday's play-in tournament game against the Golden State Warriors (10 p.m. ET, ESPN).

"We know who the head of the snake is, it's Steph," Anthony Davis said after practice Tuesday. "We got to do our best to contain him. It's gonna be a team effort, not just all the pressure on the guards. ... We got to make sure we keep an eye on him and stay locked in on him at all times."


While Davis and L.A.'s other big men will provide a back line of defense to protect the rim when Curry penetrates from the perimeter, the Lakers' starting backcourt of Dennis Schroder and Kentavious Caldwell-Pope will be primarily tasked with smothering the two-time MVP.

"He's the best shooter who has ever played this game," Schroder said on a videoconference with reporters. "So, any shot, whatever comes from half court on, it's a good shot for him. At the end of the day, you got to make it as hard as possible and be into him and limit his 3s."

Curry averaged 32 points per game to capture his second career scoring title and averaged 5.3 made 3-pointers per game -- the most of his 12-year career -- on 42.1% shooting from the outside. Golden State enters the play-in having won seven of its past eight games, with Curry averaging 36.8 points in May.

"We anticipate they're going to throw the kitchen sink at Steph. Multiple defenders, different matchups, some blitzes, some kind of shadowing, that type of stuff," Warriors coach Steve Kerr said Tuesday. "We've kind of seen everything, Steph has seen everything.Draymond [Green]is probably the key in terms of when they do throw stuff at Steph, Draymond has an answer with all of his screening and dribble handoffs and that sort of thing, so they're fun to watch together."

"He kept these guys alive all season, winning games that people thought they should lose," Davis said. "He was playing his ass off to put this team in a great position to be in the playoffs."


The Lakers enter the play-in round on a five-game winning streak that stabilized an otherwise injury-riddled season. L.A. will have its full roster available against Golden State, but there are still some lingering signs of the health hurdles the team went through. Lakers coach Frank Vogel said LeBron James "had some minor soreness," after playing both legs of a back-to-back over the weekend and missing 26 out of 28 games before that with a high right ankle sprain.

"But he's good to go," Vogel said of James, who did not speak to reporters. "Was a full participant in practice today and is good to go."

Davis, who went through adductor tightness and shoulder pain in the final week of the regular season, said he was "fine" heading into the Golden State matchup. And Schroder, who returned to the lineup for the final weekend following a seven-game absence because of the league's health and safety protocols, said he'll keep playing his way back into shape.

"I mean, I feel great. I'm going out there," Schroder said. "I didn't play, of course, for 10 days. I mean, of course my wind the first two games was a little [lagging]. I'll try to get back to my conditioning, what I have during the season. I mean, we played every other day so my conditioning was on the top level. When you sit out for 10 days, it's not the same. So, I mean, I'll just try to get back to that."

In opening up its bid to win back-to-back championships, L.A. will look to avoid the same start it had to last year's postseason when it dropped Game 1 of the first round to the Portland Trail Blazersbefore winning the series in five games. If the Lakers do that Wednesday, it will mean the Warriors steal the No. 7 seed and L.A. will have to play again Friday against the winner of the Memphis Grizzlies-San Antonio Spurs play-in game with the No. 8 seed on the line.

"We haven't actually even brought that up because it was last year," Davis said. "We know obviously with the one-game thing right now, so we can't afford to lose this game. ... We definitely want to get in that 7-seed, and I think the next game we'll play is Sunday. ... It would be very beneficial for us to win this game tomorrow and have those three days in between games to kind of tighten up the screws."


Kyle Kuzma echoed Davis' stance about keeping the past in the past, saying there is "nothing much at all" the defending champs can lean on from their 2020 run to the title that they'll apply to this time around.

"We have a different team," Kuzma said. "Players on this team have different roles than last year. We have new guys that haven't really been in a situation like this before. And we have to build our own type of story and journey out of this one."

It's a story that will start by trying to put an end to Curry's storybook season. 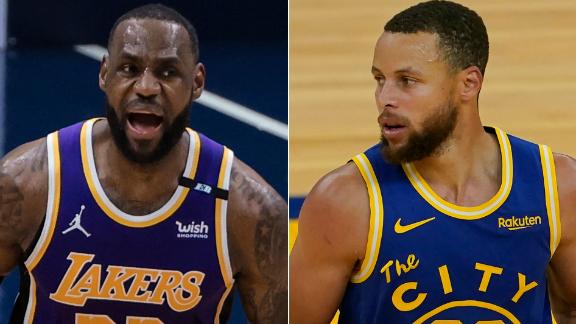