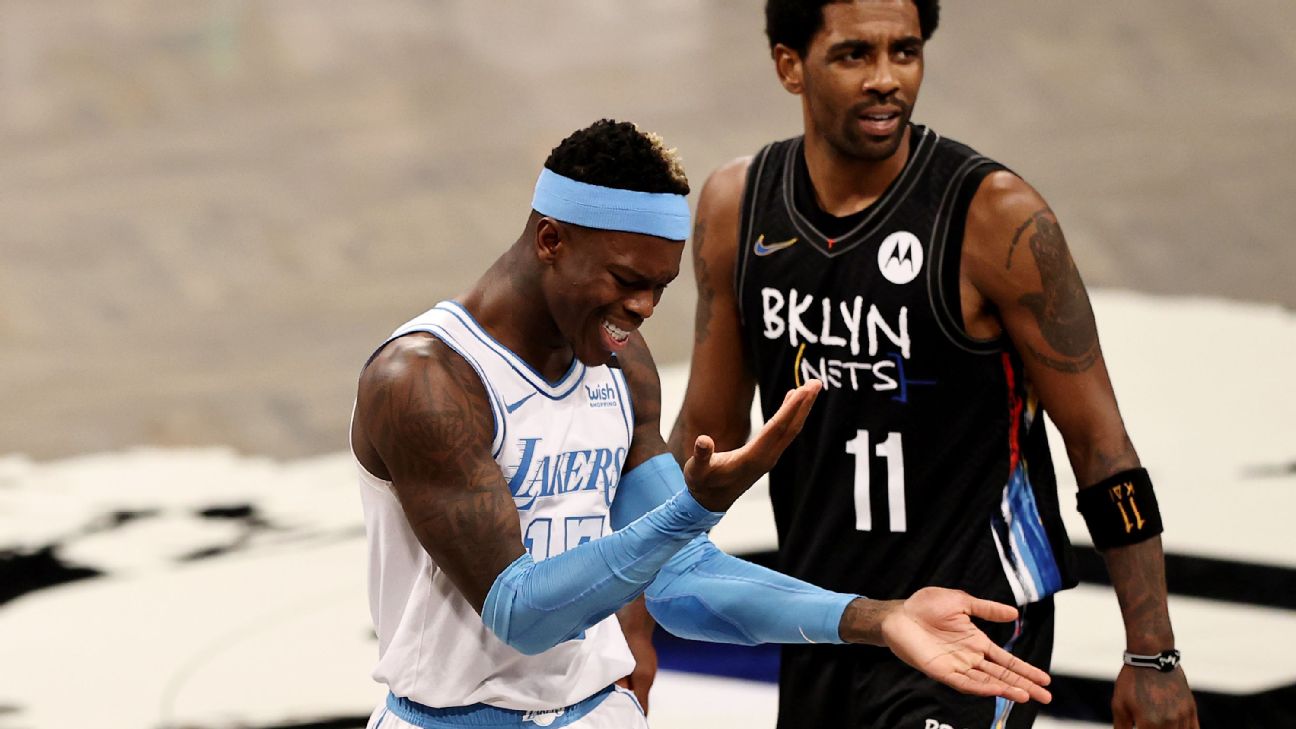 It was a potential NBA Finals preview, albeit with superstars on both squads sidelined with injuries. Nevertheless, Los Angeles Lakers guard Dennis Schroder called L.A.'s 126-101 beatdown of the Brooklyn Nets on Saturday "the best win of the year."

The visiting Lakers were playing without stars LeBron James and Anthony Davis as well as Kyle Kuzma (left calf strain), Wesley Matthews (right Achilles tightness) and Marc Gasol (left hamstring tightness), but they led the Nets by as many as 28 points to win for the fifth time in their past eight games.


"Like I said all along, all season long, when we play scrappy on the defensive end, we always have a chance," Lakers coach Frank Vogel said after L.A. held Brooklyn to 43.5% shooting and its lowest point total in eight games. "I'm super proud of our group."

Not that Brooklyn was at full strength, either, with James Harden (right hamstring) out and Kevin Durant on a minutes restriction in just his second game back from an extended hamstring injury of his own. On top of that, Kyrie Irving got into it with Schroder in the third quarter, and two were ejected.

However, the Lakers had contributions across the board, with a season-high eight players reaching double-digit scoring and the team tying a season best with 19 made 3-pointers. In addition, Talen Horton-Tucker had a career-high 11 assists, Alfonzo McKinnie had a season-high nine rebounds, Markieff Morris had a season-high three steals and Ben McLemore made five 3s in just his second game with the team.

"I learned a lot from today's game: that we have a lot of guys in this locker room that are very tough," said Andre Drummond, who had 20 points and 11 rebounds in his strongest game since joining L.A. from the buyout market last month. "Despite who is on the other side of the court, they're going to come out and play. No matter how many minutes guys play, they're going to play to the best of their ability. And we have fun doing it. We had a lot of fun tonight playing and getting this win."

Drummond sure looked like he was enjoying himself when he drove and scored on LaMarcus Aldridge midway through the third quarter. Drummond drew a foul as he bullied his way to the hoop and then dropped his hand below his knees in celebration, gesturing that Aldridge was too small to guard him.

"It was a good basket," Drummond said with a laugh. "That's my signature that I do when I score on people and get an and-1, so nothing toward LaMarcus intentionally. It's just what I do. No matter who is out there, it's happening."


It was seemingly all happening for L.A. after the run-in between Irving and Schroder, with the Lakers going on an extended 57-33 run from that point until there were only a couple of minutes left on the clock in the fourth quarter.

Irving, a 10-year veteran, and Schroder, an eight-year pro, came into the prime-time matchup having each played more than 500 career games without an ejection. That changed for both of them in the third quarter.

The pair of point guards exchanged words after Irving was called for a personal foul on Schroder with 9 minutes, 41 seconds remaining in the third quarter and the Lakers ahead 66-62, prompting referee Zach Zarba to separate the two and issue a double technical foul -- one to each player.

"I think it was unnecessary," Schroder said after the game. "It's just unfortunate that I left my team out there by themselves. And I mean, I didn't really -- I don't even know what I did. But I got kicked out, and I apologized for that to my teammates."

Zarba explained the officials' decisions to a pool reporter afterward.

Irving did not speak to reporters after the loss, leaving it to his teammates to explain what happened.

"We were in the game, but I'm not going to blame it on the ejection for why the momentum switched," said Durant, who scored 22 points in 24 minutes but also had eight turnovers. "They got it going, so we should have got it going."

The win brought the Lakers' record to 2-1 on their five-game East Coast road trip.

"When you see guys out and you see a great opponent like the Nets, you can be a little bit overwhelmed and not sure if you're going to have a chance to win it. But you want to have a go-after-these-guys mindset," Vogel said. "And we knew coming in that if we were able to prevail short-handed against this opponent that it would feel good and it would be one of the best wins of the year. 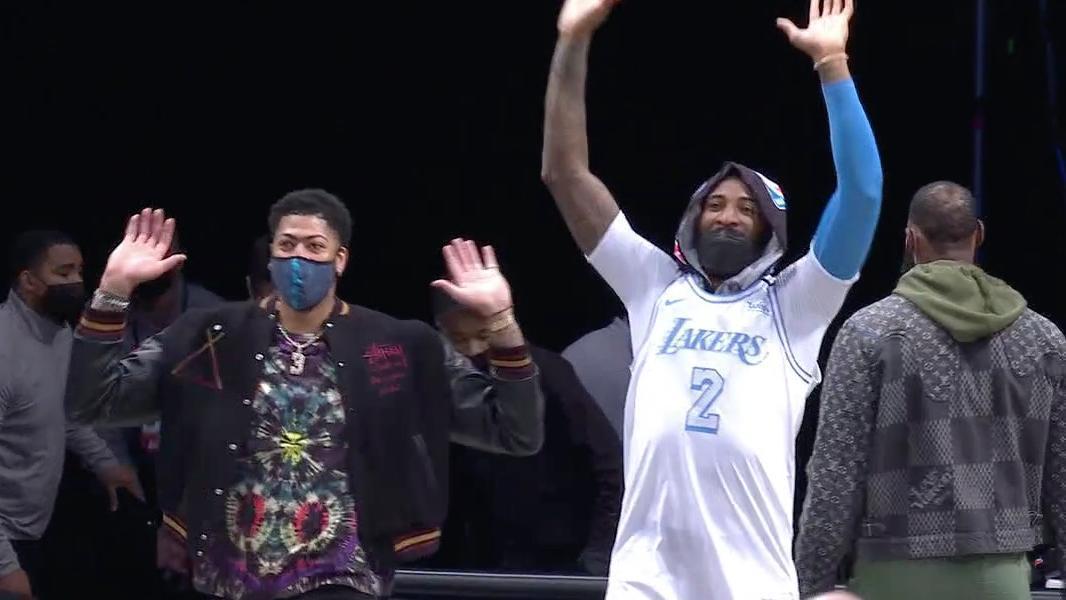