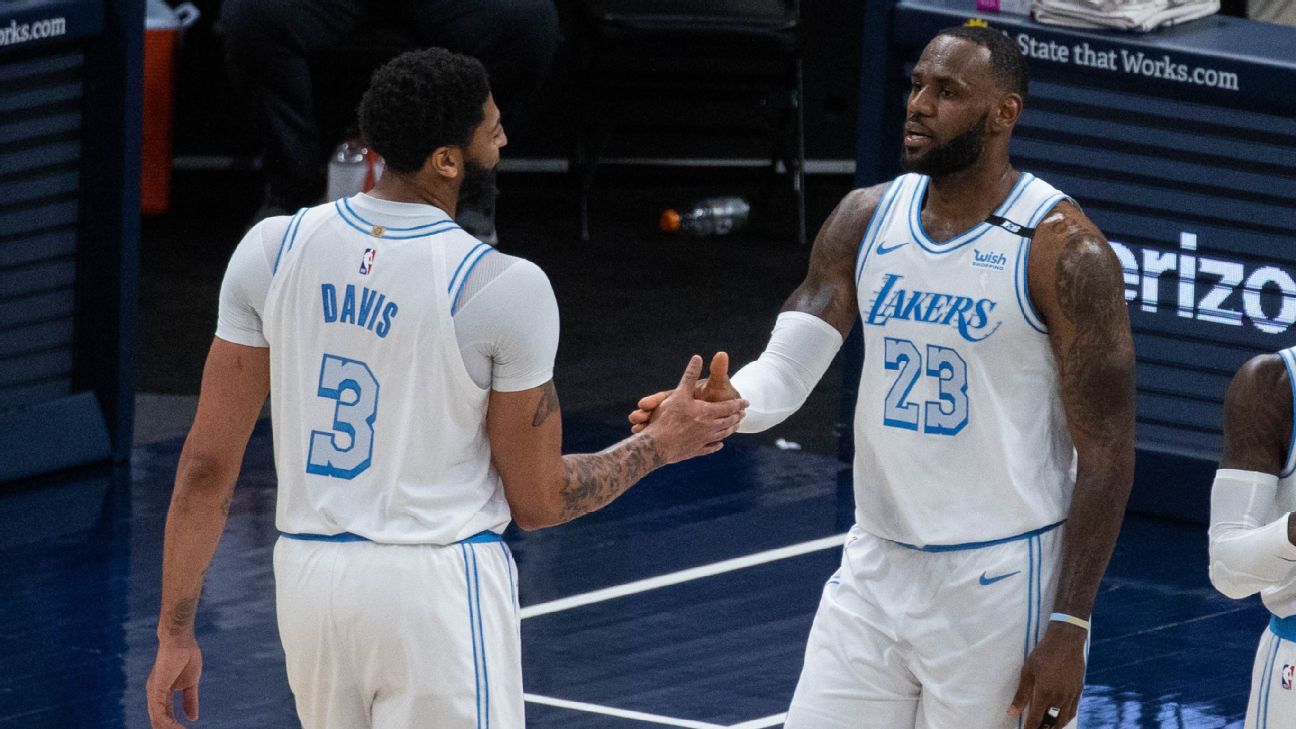 Winners of four in a row and boasting a healthy roster for the first time in months, the defending champion Los Angeles Lakers sound confident no matter how their repeat title bid begins, play-in tournament or not.

"Let the chips fall where they may," LeBron James said after playing for the first time in nearly two weeks in a 122-115 win over the Indiana Pacers on Saturday. "As simple as that. We're ready to go."


James missed the previous six games while strengthening his right ankle after a brief two-game return following the longest injury-related absence of his career (20 games). He looked sharp Saturday, scoring 24 points on 11-of-22 shooting in 28 minutes, with eight assists and seven rebounds.

When L.A.'s 14-point fourth-quarter lead was cut to three, James went on a personal 7-2 scoring spurt to give the Lakers enough breathing room to hold on for the win.

"He's LeBron James, so he's definitely going to change our team dramatically," Lakers coach Frank Vogel said. "We've been without him for a long stretch, and the other guys have performed admirably. But having him back in there, it's just a difference-maker -- his I.Q., his ability to make plays in every way you can make a play -- and helped us close the game out."

The Lakers are hoping to close the regular season out with a win over the New Orleans Pelicans. That, combined with a Denver Nuggets win over the Portland Trail Blazers on Sunday, would give L.A the No. 6 seed, thus avoiding the play-in tournament.

Vogel would not commit to how much he would play his key pieces on the second leg of the back-to-back just yet. Anthony Davis was also returning from a one-game absence because of tightness in his groin, and Dennis Schroder played his first game in 15 days because of a stint in the health and safety protocols.

"We'll meet with the medical team and see where everybody's at, in terms of the guys coming back from injury," he said. "And we'll make a decision on who's in and who's not in tomorrow."


Before the Pacers game, Vogel let it be known that he doesn't intend to manipulate his lineup to end up with a lower seeding against a preferable opponent.

"My opinion is, win as many games as you can and let the seeds fall where they may and be unafraid of any matchup," he said. "I believe in the basketball gods."

Davis -- who put up 28 points, 10 rebounds, five assists and two steals -- shared the same steely eyed resolve, even though L.A. is just 13-16 since March 20, even with its current win streak.

"We're ready to play whatever game," he said.

While the Lakers' confidence level was clear, Schroder's situation is murkier. The point guard, who had 14 points on 3-for-9 shooting and four assists, was evasive when asked about his recent absence.


Schroder said he did not test positive for COVID-19 and revealed that he is the only player on the Lakers' roster to have not received the coronavirus vaccine.

However, he also said that, after going through his second mandatory quarantine of the season (the first was because of contact tracing), he would not have to go through that again.

"At least I can't get it no more in the playoffs," he said. "So that's probably the best thing."

Another thing is certain when it comes to the Lakers: Having James on the court opens up all sorts of possibilities for the days and weeks to come.

"It will take a few games to get it all the way back," James said, "but I like where I am today."