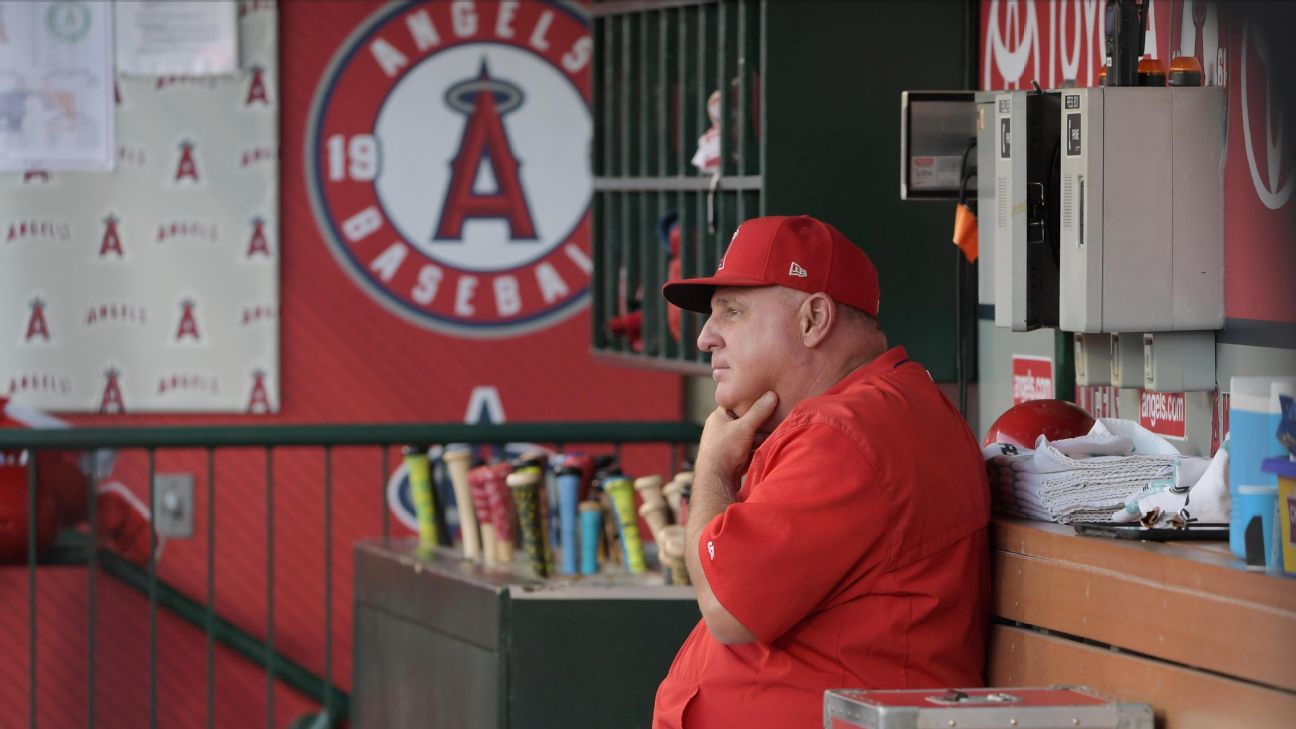 ANAHEIM, Calif. -- Mike Scioscia stepped down as manager of the Los Angeles Angels after 19 seasons Sunday, ending the longest current tenure in the majors with a come-from-behind victory.

He guided the Angels to the franchise's only World Series title in 2002.

The Angels sent him out a winner in his last game, rallying to beat the playoff-bound Oakland Athletics 5-4 on Taylor Ward's two-run, ninth-inning homer.

Scioscia was in the final year of his contract, and his departure had been expected. He said he talked to his wife, Anne, and had made his decision during that time.

The Angels finished 80-82, the first time they've had three straight losing seasons under Scioscia. They haven't won a postseason game since 2009.

Angels owner Arte Moreno thanked Scioscia in a statement and said he would always be part of the franchise's family.

Scioscia deflected questions about the specifics of his departure, repeatedly saying he only wanted to talk about the just-finished game.

"It's been second to none. It's been incredible," he said about his tenure in Anaheim, tears glistening in his hazel eyes.

Scioscia, a two-time All-Star catcher with the Los Angeles Dodgersin 1980-92, thanked his current and former players, coaches and Angels fans.

"I'm really happy, guys," he insisted as his voice broke. His wife stood along the wall in the crowded room. Mike Trout and Kole Calhoun were among the players who sat and listened.

Moreno credited Scioscia for helping the franchise evolve into what the owner called "an elite organization."

"Mike's tenure as manager of the Angels includes six division titles, a pennant, and a world championship that transformed this franchise, and its perception on both local and national levels," Moreno said in his statement.

Scioscia said the success the franchise enjoyed during his tenure wasn't due to him.

"This game is not about the manager, GM or owner," he said. "The game is about the players and it always will be. We had guys that just put it all on the line, whether we were going good or going bad. That's what I'm going to take away."

Scioscia asked, "What's next?" and then answered his own question, saying he and his wife would be going to dinner near their Ventura County home. She indicated there might be a surprise awaiting him and Scioscia joked that they would be joined by 30 of his closest friends.

When he wasn't getting emotional, Scioscia's humor came out.

"I had nothing to do with today, with the lineup or pitching changes," he said. "That's probably why we won."