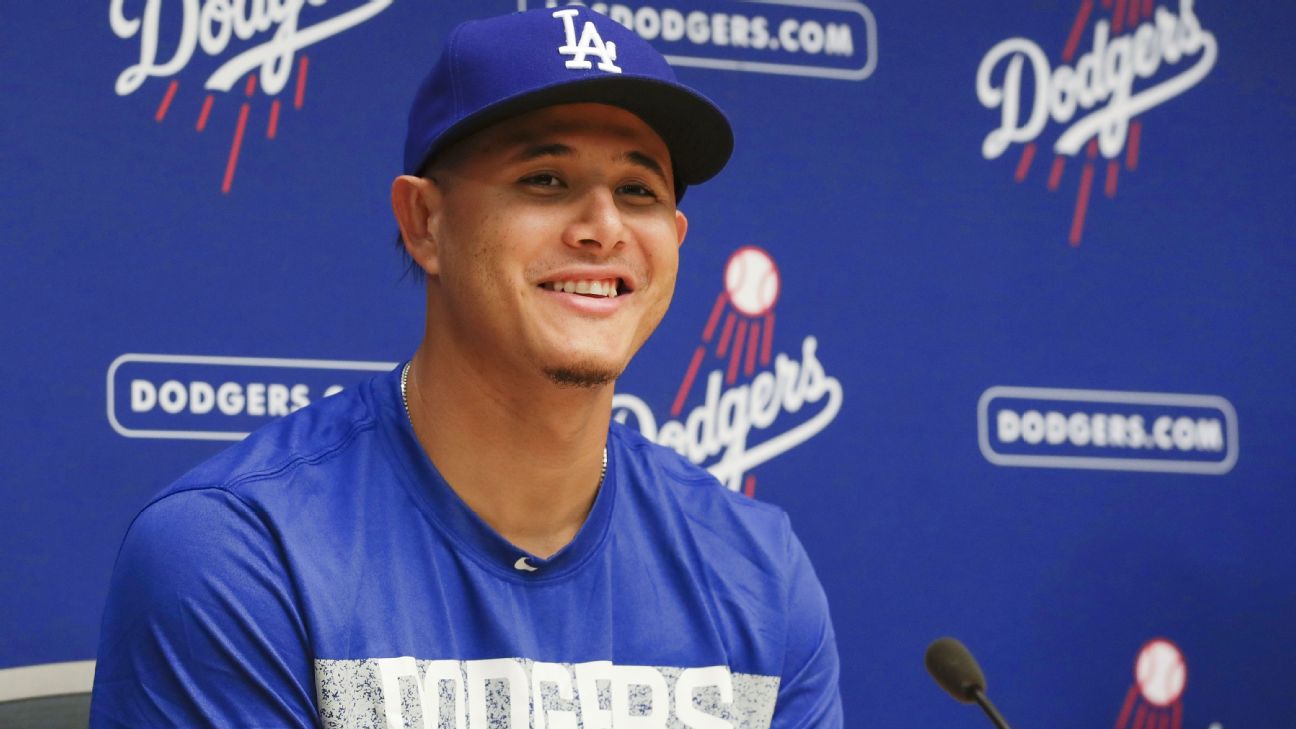 LOS ANGELES -- Dodger Stadium had already begun to empty, butManny Machado's most enthusiastic cheering section was still around by the time his moment came.

It was in the bottom of the ninth, with one out in a game the Los Angeles Dodgers trailed by four. Machado connected on a 98 mph fastball -- the type of pitch he had been swinging through of late -- and sent it over the center-field fence, 403 feet deep, one of the few home-team highlights in a5-2 loss to the Milwaukee Brewers on Monday night.

Only a few feet away, occupying the first row of the first section on the left-hand side, stood 12 men in blue T-shirts that spelled "MANNYWOOD 2.0" in big white letters.

Machado's home debut -- one day before the 10-year anniversary of the Dodgers' acquiring Manny Ramirez, sparking the original "Mannywood" era -- was a successful one, outside of the Dodgers' 48th loss in 107 games. He drew a couple of walks, one of them after falling behind in the count 0-2. And he homered for the second time since coming over from the Baltimore Orioles in a prospect-laden package 12 days earlier.

The "Manny" chants followed him into the dugout, but Machado came away disappointed.

"I should've hit that a couple of innings before, when I had runners in scoring position," Machado said, referencing a fourth-inning at-bat that finished with a caught-looking strikeout and two stranded runners. "That would've tied the game up, so it was a little late for the home run. We're here to win games."

Machado, 14-for-46 since switching teams, arrived as a win-now move for a Dodgers team that fell a game short of a World Series championship last season.

But one of the overwhelming questions centers on whether Machado and the Dodgers can agree on a long-term commitment once he ventures into the free-agent market, something Los Angeles and last year's midseason addition, Yu Darvish, were unable to accomplish. Before Monday's game, Machado said he would "definitely" take these next couple of months as an opportunity to evaluate whether the city of Los Angeles suits him.

Machado is a native of Miami who spent six and a half major league seasons in the northeast. But he has some unique ties to L.A. Upon arriving, he switched his jersey number from 13 to 8, partly for what he described as "a new beginning" but also as a nod to Kobe Bryant. He rehabbed from knee surgery here in 2014. And when he played at Dodger Stadium in 2016, he made sure to snap a picture with legendary broadcaster Vin Scully.

"It's awesome," Machado said of Dodger Stadium. "There's a lot of history here."

Machado, 26, is in the midst of his best offensive season, with a .314/.391/.567 slash line, 26 home runs and 70 RBIs. Dodgers manager Dave Roberts praised his consistent preparation, marveled at how easily he makes this game seem and called him "a bona fide superstar."

Machado is a two-time Gold Glove Award winner at third base but has stated a desire to return to shortstop on a full-time basis. He will make that known to teams in the offseason, even though the defensive metrics are not in his favor.

For now, though, he is playing third base, filling in for Justin Turner while he recovers from a groin strain -- and seemingly happy to do so.

"Obviously I'm a shortstop at heart," Machado said. "I want to continue to play shortstop. I will go back over there. But at the end of the day, the most important goal is to get to the World Series and to win the World Series."