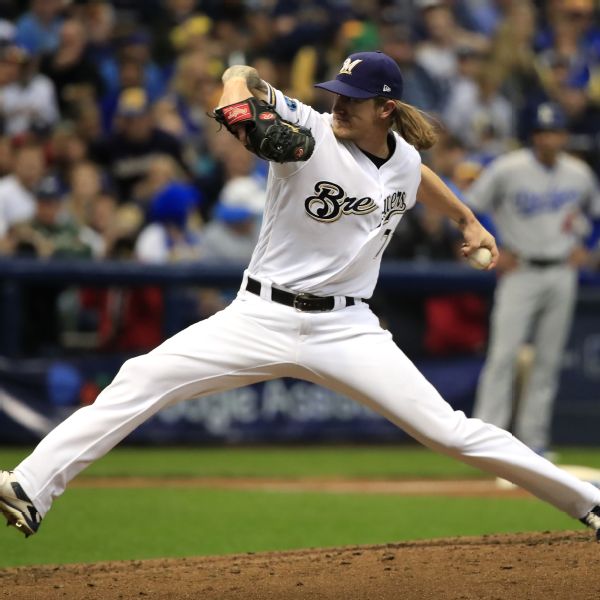 LOS ANGELES -- The changing nature of relief pitching was front and center at Dodger Stadium on Saturday when baseball's top firemen were honored.

During a news conference before Game 4 of the World Series, Edwin Diaz of the Mariners was announced as the American League's top reliever for 2018, while the Brewers' Josh Hader took the honors in the National League.

Joining Diaz, Hader and MLB commissioner Rob Manfred at the podium were the relievers for whom the respective league awards are named: Mariano Rivera and Trevor Hoffman, who rank first and second all-time in saves, respectively.

Rivera and Hoffman represent the prototype for how the modern closer was defined for the better part of the last three decades. However, the definition of "bullpen ace" is expanding, with there being no better example than Hader.

"To be honest with you, I think we're seeing a microcosm of what baseball is turning into, with the bullpenning and things like that," Hoffman said. "Andrew Miller received the award a few years ago, the Mariano Rivera Award, in an equal position with the Cleveland Indians."

Hader, a gangly lefty with a deceptive, cross-body delivery, was used mostly in multi-inning outings and rarely in back-to-back days. He might pitch in the middle innings on one day and might be asked to get the last five outs of a game a couple of days later. However he was used, he excelled.

Hader went 6-1 during the season with a 2.43 ERA and 12 saves. He set a new record for lefty relievers by striking out 143 batters. His presence was one of the most-discussed strategic elements of the National League Championship Series, when his availability largely dictated the lineups that Dodgers manager Dave Roberts would use, as well as his substitution patterns.

"I think it was obvious of the year that Josh had, it was that dominant from a reliever's standpoint," Hoffman said. "It was taken into consideration -- the number of saves -- but I think his year stood out amongst everybody else's."

Hader pitched 7 2/3 scoreless innings during the postseason with 12 strikeouts in helping the Brewers come within one game of making the World Series for the first time since 1982.

"It really comes down to pitching," Hader said. "I think that whenever your time is up and you can get out on the mound and help the team out in any way, I think that as long as you don't set a role (for) yourself, that's really where the game is going now."

Diaz was a more traditional closer, racking up 57 saves, tied for the second most ever. He posted a 1.96 ERA in helping Seattle rise to surprise contender status for most of the summer. A big factor in that was the Mariners' 54-28 record in games decided by two or fewer runs, largely due to Diaz's ability to consistently lock down leads.

The righty features one of baseball's best sliders. As his save total piled up, Diaz eventually bet his manager, Scott Servais, on a haircut. If Diaz reached 50 saves, Servais would have to get a replica of Diaz's close-cropped hairdo. Obviously, Diaz won the bet.

"I keep all the balls of my saves," Diaz said. "I keep it, bring them home, and put them everywhere in the house. But I give that ball to him to let him know, I got to 50, so you have to be ready to get the haircut."

Hoffman, who ranks second all-time with 601 career saves, was inducted into the Baseball Hall of Fame this summer in Cooperstown, New York.

Meanwhile, Rivera will be eligible to be voted in for the first time this winner. The all-time saves leader (652) is considered a shoo-in to be inducted on his first try. He followed Hoffman's induction process carefully.