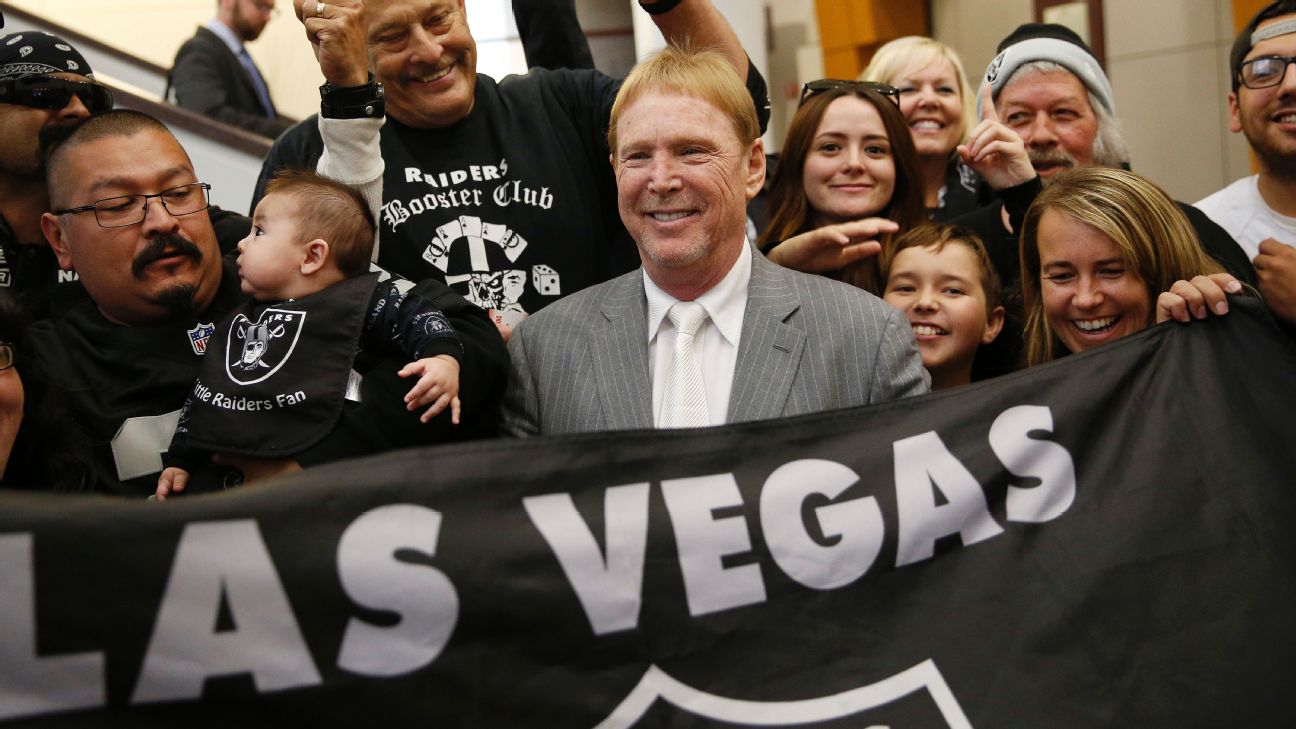 OAKLAND -- In a wide-ranging interview with ESPN after the Raiders' 20-6 loss to the Los Angeles Chargers on Sunday, owner Mark Davis accepted blame for the team's 1-8 start.

Davis also touched on topics such as the Khalil Mack trade, where he hopes his team will play in 2019, how years of draft misses have contributed to where they are now, his belief in coach Jon Gruden, and how general manager Reggie McKenzie might fit in the future. Davis also acknowledged that the Raiders lost their way in last season's defeat at Washington, a game in which the team could not agree on how to protest during the national anthem.

"I always look in the mirror, and the buck stops with me," Davis said during the 45-minute sitdown at a waterfront restaurant in Jack London Square. "Where this team is right now is my fault. We haven't been able to build a 22-man roster. We haven't been able to give this team a chance to win because the reconstruction failed. We failed from 2014 on to have a roster right now."

Davis was referring to his two-phase, four-year deconstruction/reconstruction project, which beganunder McKenzie in 2012, months after the death of Al Davis. Mark Davis said a team should be able to get five players, three from the draft and two in free agency, every year that would serve as foundation pieces going forward. McKenzie was initially hamstrung because of the trade for quarterback Carson Palmer in 2011 that cost Oakland its first-rounder in 2012 and a second-rounder in 2013.

The Raiders drafted what Davis saw as legitimate foundation pieces in edge rusher Khalil Mack, quarterback Derek Carr, offensive lineman Gabe Jackson and receiver Amari Cooper in 2014 and 2015. But there were no such pieces in 2012, 2013, 2016 and 2017.

The trade of Mack, then, was a tough decision to make, even though it netted Oakland a package that included two first-round picks.

Davis said Oakland reached out to Mack's agent, Joel Segal, after the team signed Carr to his five-year, $125 million contract in June of 2017 and presented him with a contract extension that would have made Mack the highest-paid defensive player in the NFL.

"But they decided they didn't want to do it that early," Davis said. "They would wait."

Mack played the 2017 season, and then Gruden was hired in January of this year. Davis said Gruden called Mack and spoke to him briefly.

"That's the last time Jon and Khalil talked," said Davis, who added that the Raiders again talked with Segal during the combine about an extension that would still make Mack the highest-paid defensive player in the league. Mack's representatives countered with an offer that "was not going to happen, was not doable for us," Davis said.

"From that point on, (Mack) would not talk to anyone in our organization," Davis said. "Not Reggie, not Jon, not anybody."

Still, trading Mack did not seem like a realistic possibility, according to Davis.

"My thought was, 'Listen, he signed a five-year contract, if he's the type of guy that I think he is, he's going to honor that contract,'" Davis recalled. "And he's going to come in and play for the $13 million for this year and then we'll work for him during the year and get it. Word came back through certain players that know him and talk to him and know me as well, that he wasn't going to come in. He was going to do the Le'Veon Bell (holdout). At that point, I said, 'F it. The guy hasn't talked to anybody. We've got to do something.'"

"It might not have been the right decision, but the other point to this whole thing is that Segal is also the agent for Amari Cooper," Davis said. "And we knew the same situation was coming up the next year. It wasn't just one layer of chess; it was two layers of chess.

"But to blame Jon, for Khalil Mack not being here, is absolutely not the truth. It was a decision that was made and it wasn't made easily ... I don't have any bad feelings toward (Mack). I wish he would have talked to Jon and Reggie and wanted to at least honor the fifth year of his contract."

Much has also been made about the Raiders, who are moving to Las Vegas in 2020, not having a lease for a home next year. And with the city of Oakland threatening a lawsuit against the team, the Raiders have been linked to San Diego as a potential temporary home.

But Davis said he would prefer to stay in Oakland for one last season.

And what about the potential lawsuit?

"Emotionally, I would say, why would I give them $3 (million), $4 (million), $5 million in rent that they're going to turn around and use to sue me?" he said. "But, at the same time, if they'll have us, I can't turn on the fans. I can't do it. And this is terrible negotiating I'm doing now. I'm going to get killed. But that's just the way I am. But, if in fact it does get ugly, and can't be bridged, we do have options."

Some sort of resolution would seemingly need to be handled by early spring, before the NFL schedule for 2019 is completed.

Davis is also interested in seeing how more familiarity between Carr and Gruden might foster the quarterback's growth, as Carr is in his fourth different system in five years.

"He is the franchise quarterback right now. He doesn't have Amari Cooper. He lost (Martavis) Bryant to a knee injury today. Guys have been getting hurt. Who's he throwing to? Jordy Nelson and Seth Roberts, which are good guys. But they're not putting the fear of God in anybody. The tight end (Jared Cook) is playing his ass off. You look at the quarterback and he's playing behind a battered offensive line ... so I don't know what you can put on Derek and I don't think it's fair to put all the blame on him."

Davis told ESPN after he received league approval to move to Las Vegas that he wanted to leave the Bay Area with a Super Bowl title before departing. Now, though, the team is closer to an expansion outfit than a contender. Davis said his goal to win a title was made before another draft class yielded little, if anything, in terms of foundation components and before the team imploded in Washington last year on prime-time television.

"That's when I felt a big turn in this organization," Davis said. "I don't know what the hell happened, but we got destroyed in the game and it just seemed like the team never picked itself back up.

"Someday the story may come out. I don't have the full story."

As the owner, he was asked, shouldn't he know the story? Wouldn't he want to know it?

"Absolutely, because I've never seen a team change that quickly," he said. "And the Raiders stand for social justice. So to see any type of division is really hard for me."

Oakland fans are irate, and Davis said he understands.

"I feel so bad for the fans because they want to win. And believe me, there's nothing more I want than to win and there's nothing more Jon wants to do than win. Reggie wants to win. Everybody in this organization is built around winning. We don't have the tools right now to do it and it's nobody's fault but our own and when it comes down to it, it's my fault."

That may be of little consolation to fans who are wondering when Davis, McKenzie and Gruden decided that this current roster was not good enough to compete, that trading away Mack and Cooper for three future first-round draft picks was a better play than locking them up with extensions.

"It's been all part of an evolution, but I think it's becoming clearer and clearer to Jon as well that the talent is just not here at this time," Davis said.

"The drafts did not help supplement what we were doing in the free-agent market. If you look at our roster now, it's a bunch of free-agent one-year guys that are mercenaries. And they're great guys and they're Raiders. Once a Raider, always a Raider... but we just don't have the overall talent of a 22-man roster."

"Reggie and I need to sit down and talk and figure out how we are going to go about the future," Davis said. "We've got to look in the mirror and figure out, where the hell did we go wrong in trying to build this thing?

"We failed. I have failed. But at the same time, we wouldn't have been in the great position we were in without Reggie McKenzie being here."

As McKenzie said recently, his job is to get players Gruden wants, and Davis said he never felt the roster simply needed a good scrubbing in the wake of Jack Del Rio's firing last December.

"I understood it was going to be a lot of work, but Jon has a 10-year contract," said Davis, who also praised the contract and salary-cap work of Dan Ventrelle and Tom Delaney. "I know how hard Jon Gruden works. I know how much he wants to win. And how much days like today are killing him.

"Having Jon Gruden here was the endgame for me. Jon's going to be the stability here. Jon's going nowhere. That's just the way it is."