Max Muncy by moonlight: Game 3 is longest in Series history, full of heroics and the bizarre 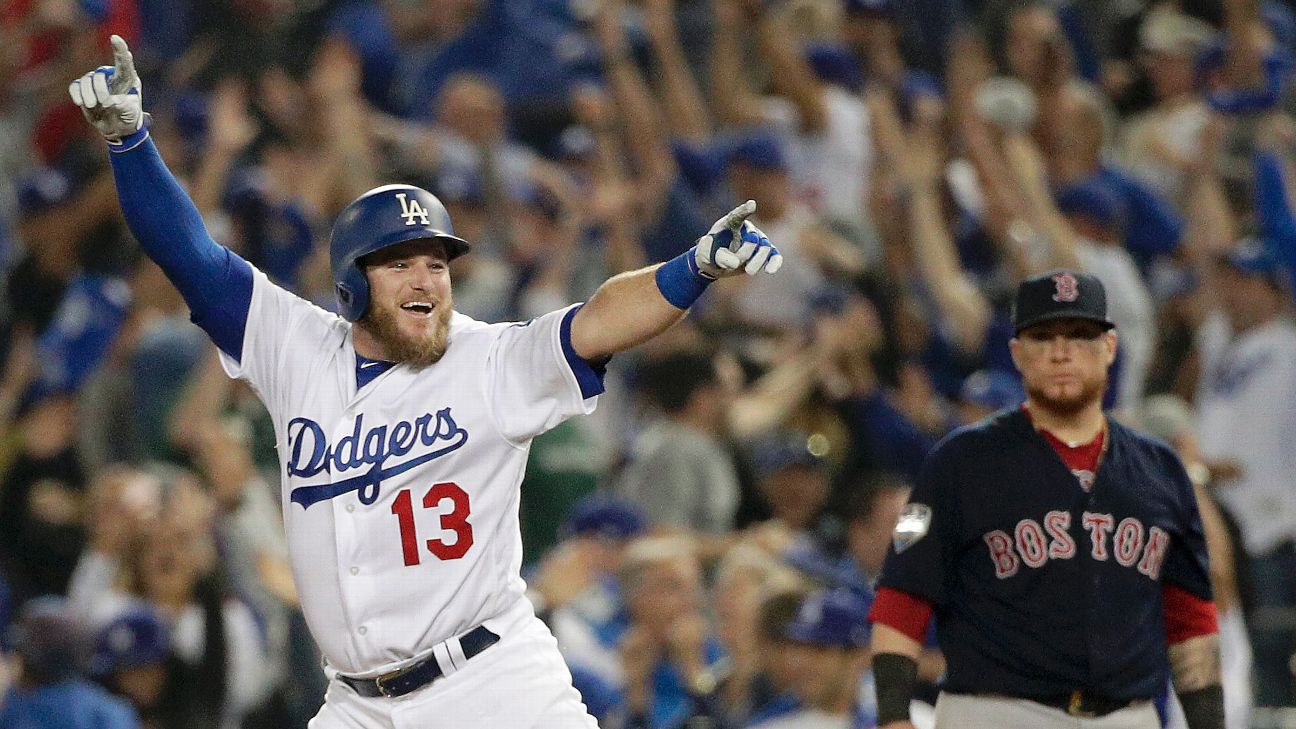 LOS ANGELES -- The clock spun past midnight, the moon rose from behind the upper deck in right field to high above the stadium behind home plate, the pitchers kept pitching, the hitters kept trying to hit, the crowd thinned out, and finally the longest game in World Series history ended after 18 innings and 7 hours, 20 minutes.

Max Muncy was the hero, leading off the bottom of the 18th and swatting a 3-2 pitch from Nathan Eovaldi over the fence in left-center with but a few inches to spare. It gave the Los Angeles Dodgers a 3-2 victory over the Boston Red Sox and maybe saved their season: No team has ever come back from a 3-0 deficit to win the World Series.

"I don't really know what to say," Dodgers outfielder Cody Bellinger said. "I'm just glad Muncy hit the home run so we can go home and get some sleep."

Muncy, the surprise slugger all season long who began the year as roster depth in Triple-A and ended up leading the Dodgers with 35 home runs, almost won the game with a home run in the 15th, but his fly ball curled a couple of feet to the right of the foul pole in right field. He didn't miss his next time up against Eovaldi.

"We've been fighting for our lives since April, and we got to it here tonight," Muncy said. "Really long game, talk about a good pitcher over there [in Eovaldi]. He was doing just about anything he wanted with the ball, and on top of that he was throwing 101 mph. Hats off to him for that game he pitched. But for us to be able to get this, you got to feel like it gives us momentum going into tomorrow."

Maybe the best way to sum up the bizarre night at Dodger Stadium: Of the 50 players on both rosters, only four didn't get into the game: Chris Sale and Drew Pomeranz for the Red Sox and Rich Hill and Hyun-Jin Ryu for the Dodgers. The 46 players used on both teams was a record for any postseason game. The Red Sox burned through a record-tying nine pitchers, including Eovaldi, the projected Game 4 starter who pitched the final six-plus innings -- leaving the Red Sox without a starter for Game 4 until manager Alex Cora announces one Saturday afternoon.

The Red Sox are still up in the series 2-1, but the Dodgers knew they needed this one.

"This was a must win for us, 100 percent. That's why we were grinding until the last out, until the last run came across the board," Dodgers third baseman Manny Machadosaid.

The game featured a wild 13th inning when both teams scored on errors. The Red Sox scored in the top the frame when Brock Holt walked and took second on a wild pitch. Eduardo Nunez dribbled a ball between the pitcher's mound and first base, but second baseman Enrique Hernandez couldn't handle the flip from pitcher Scott Alexander as Nunez slid headfirst into the base and Holt scored as the ball trickled down the first-base line.

The last time a go-ahead run scored on an error in extra innings in a World Series game was the infamous miscue by former Red Sox first baseman Bill Buckner in Game 6 in 1986 against the New York Mets.

The Dodgers tied it up, however, with two outs in the bottom of the inning. Muncy walked leading off and took second when he tagged up while Nunez tumbled into the stands catching Bellinger's foul popup. Yasiel Puig hit a hard grounder with two outs to second baseman Ian Kinsler. His foot gave way on the fringe of the outfield grass as he planted his foot and he threw wild to first base, allowing Muncy to trot home with the tying run. That was the latest inning a team had ever tied a World Series game.

"I had the last out in my glove and couldn't get it over there," Kinsler said. "Tough to swallow."

The Red Sox weren't blaming Kinsler for the loss.

"We did everything we could to win that game," said Nunez, who spent the game falling and diving all over the place and required two extended checks from the team trainer. He even tripped on the pitcher's mound catching an infield popup. "We lose together, we win together," he added. "Everybody can make a mistake in any situation. We're fine. It happens sometimes. It was just the wrong time."

The Red Sox have other reasons to kick themselves. They couldn't touch Dodgers rookie Walker Buehler, who fired seven scoreless innings. Jackie Bradley Jr.tied the score with a home run in the eighth off closer Kenley Jansen, but the Red Sox couldn't do anything against the parade of Dodgers relievers. It didn't help that J.D. Martinez was pinch-run for in the top of the 10th and a double-switch left light-hitting catcher Christian Vazquez playing first base for the first time in his major league career. The top four spots in the Red Sox lineup went a combined 0-for-28, including 0-for-15 from Mookie Betts and Xander Bogaerts.

"It was a great baseball game," Cora said. "Seven hours, whatever it is. People back home are probably waking up to the end. But it's probably one of the best, if not the best, game I've ever been a part of. The effort from both sides."

And, yes, the long game created other problems for players.

"I had to [pee] since the seventh inning," Bellinger said. "We had drug testers in there so we couldn't [pee] yet because we didn't know who was getting drug tested. I'm glad [Muncy] hit the home run so I can finally see if I get tested or not."