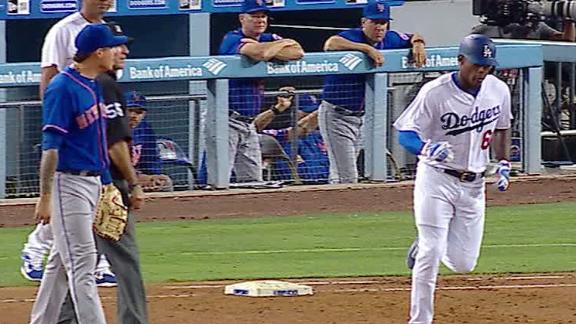 Yasiel Puig riled the strugglingNew York Mets with a long look at his three-run homer Wednesday night in the Los Angeles Dodgers' 8-2 win, which put them into the sole lead of the National League West.

Puig posed at home plate and watched his fourth-inning drive off rookie Tyler Pill, irritating Mets first baseman Wilmer Flores, who apparently said something to Puig as the Cuban slugger rounded the bag.

Puig looked back at Flores as he was trotting toward second and cursed at him, Flores said.

"I don't think he knows what having respect for the game is," Flores said. "We're playing horrible right now. We don't need his [behavior]. He disrespected us."

Between innings, Mets veteran Jose Reyes and outfielder Yoenis Cespedes, also from Cuba, spoke with Puig on the field.

"I think there's a way to enjoy a home run," Flores said. "That was too much."

Puig told reporters he didn't see anything wrong with the home run trot and said Flores was overreacting.

"If that's the way he feels, it might be a result of them not playing so well," Puig said.

Puig said Cespedes told him he needed to run harder but that he disagreed with that assessment.

For his part, Cespedes declined to discuss the talk he had with his fellow Cuban, saying it "was a personal conversation."

It's far from the first time Puig has annoyed opponents with his antics, but there was no obvious attempt at retaliation from the Mets.

The incident comes a week after Puig was suspended one game by Major League Baseball for making an obscene gesture to Indians fans in Cleveland.

Puig, who is appealing the suspension, flashed the middle finger on both hands at fans sitting behind home plate at Progressive Field after hitting a home run in the second inning on June 13.