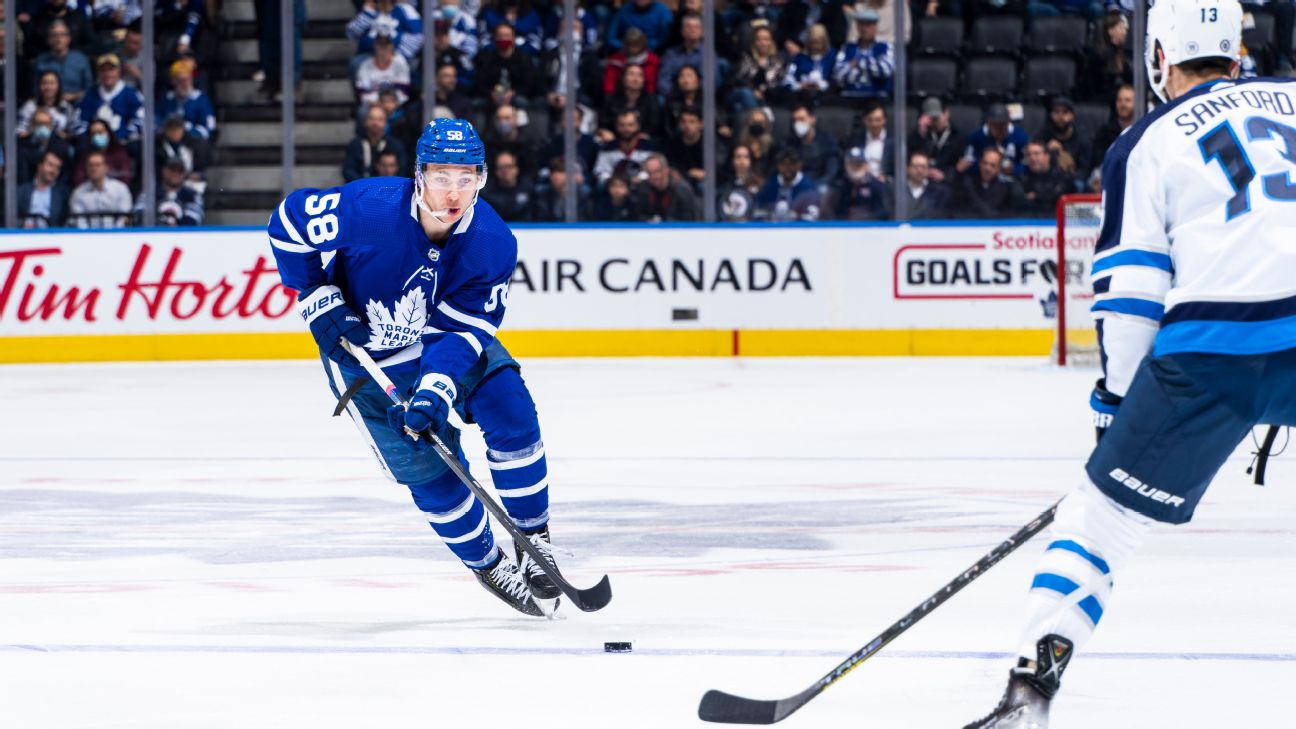 Michael Bunting, Moritz Seider and Trevor Zegras were announced Wednesday as finalists for the NHL's 2021-22 Calder Trophy, awarded annually to "the player selected as the most proficient in his first year of competition in the National Hockey League."

Members of the Professional Hockey Writers Association vote on the Calder. Winners of all NHL awards will be revealed during the conference finals and Stanley Cup Final at dates to be announced.


Toronto's Bunting is the oldest rookie of the year candidate at age 26. He was drafted in the fourth round, 117th overall, by Arizona in 2014 but didn't make his NHL debut for another four years. Bunting appeared in 26 NHL games for the Coyotes from 2018 to '21 before signing as a free agent with the Maple Leafs last summer. Bunting made an immediate impact on his hometown team, earning top-line placement with Auston Matthews and Mitch Marner while tying for the second-most goals (23) and scoring the most points (63) among NHL freshmen through 79 games.

Detroit's Seider, 21, took on a pivotal role anchoring the blue line. Drafted sixth overall by Detroit in 2019, Seider paced the Red Wings in ice time (averaging 23:02) and led all league newcomers (and all Red Wings' defensemen) with 50 points. He was valuable in all situations, logging major roles at 5-on-5, on the power play and the penalty kill. Seider would become the first Red Wings player to win the Calder since Roger Crozier in 1965.


Anaheim's Zegras, 21, was one of the NHL's most impressive -- and fearless -- forwards. Drafted ninth overall by the Ducks in 2019, Zegras turned heads with highlight-reel goals, including the now-famous Michigan play with teammate Sonny Milano, and finished second among rookies with 23 goals and 61 points in 75 games. That also set single-season franchise records for assists and points by a rookie, ahead of Cam Fowler and Bobby Ryan. Zegras paced NHL freshmen with 19 multipoint outings and ranked second in average ice time by rookie forwards (17:54). He becomes the third player in franchise history to be a Calder Trophy finalist, after Paul Kariya and Ryan. Zegras would be the first Ducks player to win it.
Report a correction or typo
Related topics:
sportsespnnewsnhlmoritz seidertrevor zegrasmichael buntinganaheim duckstoronto maple leafsdetroit red wings
Copyright © 2022 ESPN Internet Ventures. All rights reserved.
TOP STORIES
New California laws on bars, ghost guns, schools taking effect
Free gas giveaway leads to massive traffic jam in Compton
LAX expected to be second busiest US airport over July 4th weekend
California late start law aims to make school less of a yawn
California gas tax increase kicks in. What you need to know
Minimum wage in LA increases to $16.04 starting Friday
Here's what to know about the end of CA's eviction moratorium
Show More
LA County could hit 'high' COVID level in July, prompt return of masks
2nd visitor in 3 days gored by Yellowstone park bison
Hit-and-run driver slams into woman walking her dogs in Westminster
Family member beats shark to free teen girl from its jaws
Growing solar industry creating pathway out of poverty for many
More TOP STORIES News