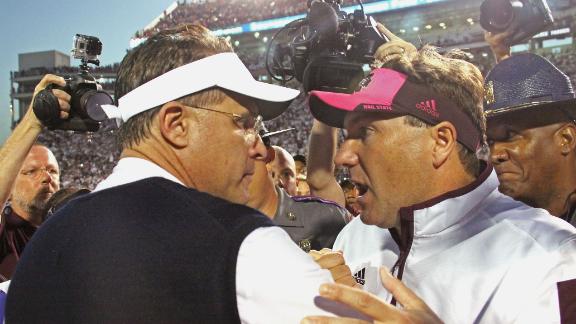 Lt. Gen. Mike Gould, a member of the College Football Playoff selection committee and former superintendent of the U.S. Air Force Academy, told ESPN.com on Tuesday that he expects the top four teams to become "more and more clear" as the season progresses, and that he's not feeling any pressure to put four conference champions in the inaugural playoff.

"At the end of the day, I think it will become more and more clear who the top teams are," Gould said in a wide-ranging phone interview. "We'll have to work this hard for the next seven weeks, and I think it will take shape where we'll be able to narrow it down and probably be no huge surprises. We just have to wait and see."

The selection committee, which is now down to 12 members after Archie Manning stepped down Monday for health reasons, will reveal its first top 25 ranking of the season at 7:30 p.m. ET on Oct. 28 on ESPN. Beginning next week, the committee will meet every Monday and Tuesday at the Gaylord Texan resort to determine its ranking.

Gould, a retired three-star general, said he has been keeping track of 30 or 40 different teams every weekend and studies them more extensively during the week. Much like committee member Condoleezza Rice, who has been tracking about 40 teams, Gould said his current pool goes deeper than 25 teams.

"It includes whoever you might figure is in the top 25 and then some," Gould said. "We have to keep our eyes open to some teams that might finish real strong here that could pop into that top 25.

"I watch a bunch of games," he said. "At times I'm reviewing games of teams that people don't consider to be contenders. They say, 'Why are you watching that?' Well, you want to watch it because one of those teams could be playing later in the season, or may have already played one of the top teams. So you still want to keep that relative awareness about who's doing what."

Like committee member Barry Alvarez, Gould said he lends credence to the relative offense and relative defense statistics, but that there wasn't one overriding metric he was looking at or studying when watching games.

While conference champions are one of the factors the committee will consider, a league title might not carry the same weight with each committee member. Rice recently told ESPN.com she doesn't feel any pressure to put four conference champs in her top four.

"I agree with Dr. Rice," Gould said. "We have no hard and fast criteria, but we will consider all of those things. It will be a factor for some. Maybe not so much for someone else. That's why we have 12 members on the committee. Everyone will have their own way of doing this, and we'll go through ballot after ballot and we'll have discussions, and at the end of the day, I'm confident we'll come up with the best four teams."

"To try and predict who's going to be in that top handful at this stage of the season," he said, "I don't think is worth too much."

Gould said his background in the Air Force is going to help him as a committee member because he was constantly faced with decisions that needed to be timely, accurate and backed up by facts.

"When we talk about this first round of college football playoffs, what's really important is we stick to process and that we have a committee made up of people from a variety of walks of life who have had to make difficult decisions in their past, and I think that's exactly what Bill Hancock and the team down there has put together," Gould said. "When the names first came out, people questioned Secretary Rice and this Air Force general, and a couple of other names, saying, 'What do they know about football?' I think the important thing is -- and most people understand this now -- it's about sticking to process, and it's about being analytical as you go about your work, and then it's about being able to make recommendations and decisions when you have a little pressure on your back. That's what this committee will be really, really good at."

Championship Drive: Who's In?
Joe Schad, Brad Edwards and Heather Dinich debate which four teams deserve to be in the College Football Playoff and which teams are on the outside looking in.