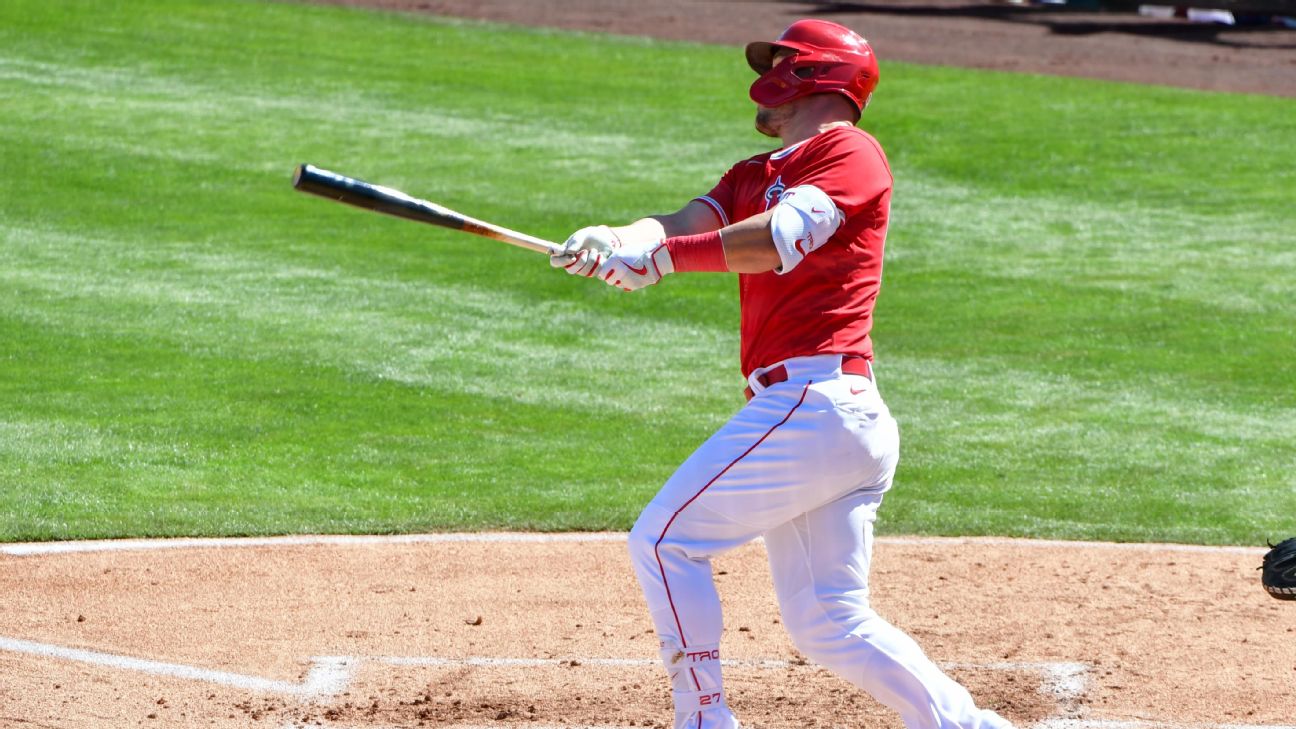 ANAHEIM, Calif. -- Slugger Mike Trout is optimistic that he can be back in the Los Angeles Angels' lineup shortly after the All-Star break.

Trout said before Friday night's game against the Baltimore Orioles that he started swinging a bat a couple days ago along with playing catch and jogging.


The three-time AL MVP has missed 40 games. He went on the injured list May 18 after straining his right calf the night before against the Cleveland Indians. The Angels said at the time that Trout would miss six to eight weeks.

"Mentally, just being able to do stuff and not having to worry about it has been big," Trout said. "It's still just getting that strength back. Once the tissue grows back it is about getting the mobility back too."

Trout, who is on the 60-day IL, is eligible to return July 17, when the Angels host Seattle in their second game after the break.

Trout isn't feeling any discomfort while swinging but hasn't progressed to running at full speed. He also isn't taking fly balls in the outfield or running the bases yet. The biggest positive development for him is that there haven't been any setbacks in his rehab.


"I think the last thing that's going to get me from coming back is running. I have to be able to run full speed and with no pain. The last thing I want to do is come back too early and tear it again," he said.

Despite the long absence, Trout was voted as a starter to the All-Star Game for the eighth straight time. It was his ninth overall selection. He was batting .333 with eight homers and 18 RBIs at the time of his injury. He said he hasn't decided whether he will attend the All-Star festivities in Denver.

Manager Joe Maddon was hoping that the Angels could play .500 ball until Trout came back, but they have slightly exceeded those expectations.

"It's going to be interesting to get him back with all the growth that's occurred within this team. A lot of guys have gotten a lot of playing time and gotten better," Maddon said.
Report a correction or typo
Related topics:
sportsespnnewsmlbmike troutlos angeles angels
Copyright © 2022 ESPN Internet Ventures. All rights reserved.
TOP STORIES
New California laws on bars, ghost guns, schools taking effect
Free gas giveaway leads to massive traffic jam in Compton
LAX expected to be second busiest US airport over July 4th weekend
California late start law aims to make school less of a yawn
California gas tax increase kicks in. What you need to know
Minimum wage in LA increases to $16.04 starting Friday
Here's what to know about the end of CA's eviction moratorium
Show More
LA County could hit 'high' COVID level in July, prompt return of masks
2nd visitor in 3 days gored by Yellowstone park bison
Hit-and-run driver slams into woman walking her dogs in Westminster
Family member beats shark to free teen girl from its jaws
Growing solar industry creating pathway out of poverty for many
More TOP STORIES News