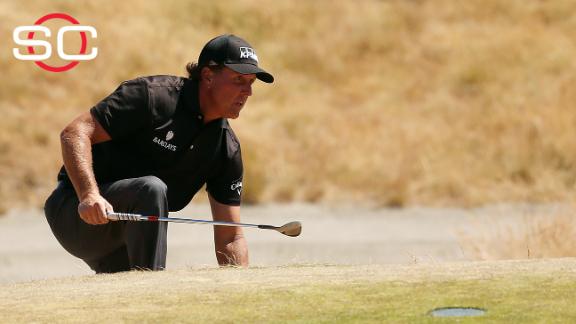 RIVERSIDE, Calif. -- Nearly $3 million transferred from golfer Phil Mickelson to an intermediary was part of "an illegal gambling operation which accepted and placed bets on sporting events," according to two sources and court documents obtained by Outside the Lines.

Mickelson, a five-time major winner and one of the PGA Tour's wealthiest and most popular players, has not been charged with a crime and is not under federal investigation. But a 56-year-old former sports gambling handicapper, acting as a conduit for an offshore gambling operation, pleaded guilty last week to laundering approximately $2.75 million of money that two sources told Outside the Lines belonged to Mickelson.

Gregory Silveira of La Quintareached an agreement with prosecutors and pleaded guilty to three counts of money laundering of funds from an unnamed "gambling client" of his between February 2010 and February 2013. Sources familiar with the case said Mickelson, who was not named in court documents, is the unnamed "gambling client." Silveira is scheduled to be sentenced Oct. 5 before U.S. District Court Judge Virginia A. Phillips and faces up to 60 years in prison, though the sentence will likely be far shorter.

According to court documents, in March 2010, Silveira -- a participant in "an illegal gambling operation which accepted and placed bets on sporting events" -- accepted a wire transfer of $2.75 million, which he knew was part of "illegal sports betting."The money, according to the documents, came from a "gambling client" and had been transferred into Silveira's Wells Fargo Bank account. Three days later, Silveira transferred $2.475 million and then $275,000 into another of his Wells Fargo accounts. The next day, Silveira transferred the $2.475 million to another account he controlled at JPMorgan Chase Bank.

The three transactions constitute the money laundering charges: "At the time, defendant initiated these three transfers with the intent to promote the carrying on of an illegal gambling operation," according to the plea agreement, which was signed May 1.

Typical of money laundering cases, the nearly $3 million is loosely described as "proceeds" in court documents, though that doesn't necessarily mean in this case gambling winnings or losings. "Proceeds" also could refer to money simply being moved into an offshore gambling account. Federal officials declined to clarify or provide details.

The Internal Revenue Service's criminal investigation unit led the probe, which was run out of its Los Angeles office. IRS officials declined to comment. Assistant U.S. Attorney Jerry Yang, who prosecuted the case, declined to answer questions, saying: "We're only allowed to reveal what has been publicly filed or publicly known. ... I can't confirm or deny anything beyond what is in filed papers."

Court documents do not indicate what triggered the investigation or its scope.

Although the final plea agreement reached between Silveira and the U.S. Department of Justice does not name the "gambling client," an initial plea agreement signed last month by Silveira and his attorney, James D. Henderson Sr., contained a reference to the "money laundering of funds from P.M." After Outside the Lines inquired about Mickelson's potential role in the case, the U.S. Attorney's Office on June 17 filed a motion to have the original plea agreement stricken. The next day, it filed an amended version minus any reference to "P.M."

It is standard Department of Justice policy for documents not to mention third parties who are not criminally charged. Henderson, a high-powered Los Angeles attorney whose gambling-related clients have included offshore sportsbook pioneer Ron "Cigar" Sacco, told Outside the Lines he didn't "know anything about 'P.M.'" and declined to comment further, citing a nearly four-decade practice of not talking to the media about cases.

Two sources, though, told Outside the Lines that the client was Mickelson.

Last year, Mickelson made off-the-course news when his name surfaced in an ongoing federal insider trading investigation, which also involved billionaire investment tycoon Carl Icahn and iconic sports gambler/entrepreneur Billy Walters. Mickelson has been cleared in one of the alleged instances of insider trading, and it's unclear whether federal authorities are still investigating well-timed trades of another stock. A spokesperson for the U.S. Attorney's Office in New York declined to comment when reached by Outside the Lines.

Mickelson has earned more than $77 million over his three decades on the PGA Tour and also has lucrative endorsement deals with Callaway, Barclays, KPMG, Exxon Mobil, Rolex and Amgen that collectively pay him more than $40 million annually, according to Forbes.

The left-handed golfer is known for rarely shying away from a money match, and his affinity for sports gambling is no secret, either. In 2001, he was reprimanded by the PGA Tour after winning $500 from Mike Weir in the players' lounge at the NEC Invitational: Mickelson had wagered $20 at 25-1 odds that Jim Furyk would hole a bunker shot.

Ty Votaw, executive vice president of the PGA Tour, declined to comment on the Silveira matter and the Tour's gambling policies.

How he is connected with Silveira remains unclear.

Silveira made a small name for himself in the 1990s as a sports tout, a seller of betting picks to less-sophisticated bettors. He was based then in San Diego and, according to media accounts at the time, drew controversy as some suggested he was operating a moneymaking scam. He drew the attention of Sports Illustrated in a storyon rip-off sports services.

He also was tied to ventures such as the Football Betting Guide, Blazer Sports and Spot Play. He not only went by the name Greg Silveira, but also answered to Gordie Deangelo and Gordon Michaels.

Henderson stood beside Silveira last Monday as he admitted guilt. Yang spelled out the case:

The defendant knew the $2.75 million was from an illegal sports gambling business.

He knew the laundered money was from a gambling client.

And finally, he acted with intent to promote an illegal gambling business.

Asked by Judge Phillips if it were all true, Silveira responded: "Yes, your honor."

Dressed in black slacks and a tan, long-sleeve shirt, the 6-foot Silveira responded confidently and in a clear voice to the judge's questions. Silveira lives a nearly three-hour drive east of Los Angeles in the pristine desert community of La Quinta in a two-bedroom condominium, which is owned by his brother, on the PGA West golf complex.

Signs along the main PGA West thoroughfare describe it as "The Western Home of Golf in America." The lush courses annually serve as home to the Humana Challenge.