MLB Roundtable: Shohei Ohtani's Rookie of the Year case and what's next 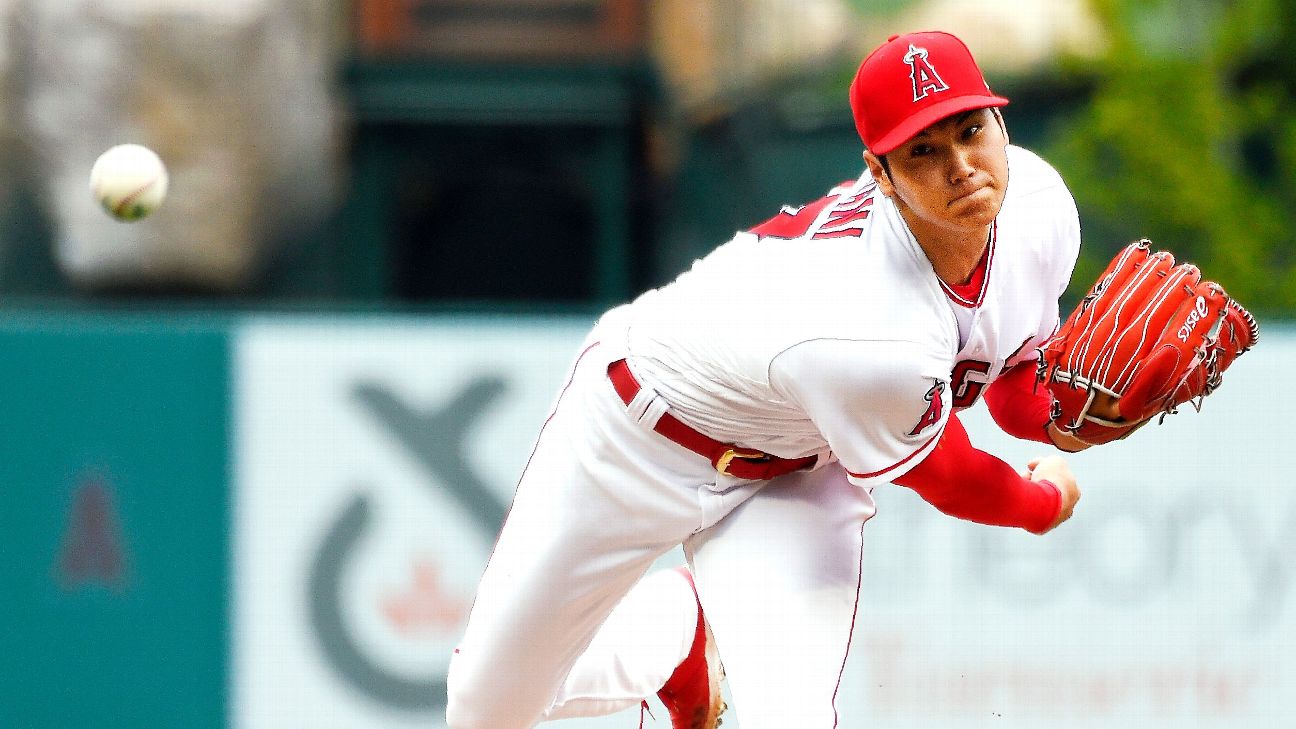 With Shohei Ohtani returning to the moundSunday night for the first time since an elbow injury in June, we asked Sam Miller, David Schoenfield and Bradford Doolittle to assess his season so far with the Los Angeles Angels, his Rookie of the Year candidacy and his future as a two-way player.

If the season ended today, would Ohtani be your AL Rookie of the Year? If not, who would be -- and where does Ohtani rank?

Bradford Doolittle:I haven't addressed the rookie races in my recent comments about the awards chase, using my Awards Index, but, yeah, I've got Ohtani as the top AL rookie. He's got a pretty good margin over Gleyber Torres and Miguel Andujar. He was very good as a pitcher before he got hurt, though we'll see if he's at the same level from here on out beginning with Sunday's start. And he has been very good as a hitter, as well. It's an unprecedented combination.

Sam Miller: He's probably second on my hypothetical ballot, just a little bit behind Torres. Hitting and pitching is obviously an incredible and unique accomplishment, but hitting and fielding is also a valuable (if more mundane) combination, and Torres' excellent offense at premium positions pushes him ahead.

David Schoenfield: A reminder of how long the season lasts: It feels like a million years ago when Ohtani was the talk of baseball in April, so it's easy to forget that he has still been mashing the ball even though he hasn't pitched since early June. His overall rate of production is better than that of Andujar and Torres (and Joey Wendle, who actually leads the two Yankees in WAR) -- granted, in fewer plate appearances -- but he has also pitched 49 innings at a high level. That combination gets my vote.

What does Ohtani still need to do down the stretch to seal or steal the award?

Doolittle: Just keep chugging along, while the analysts among us build the case that he has provided more value than any other rookie, even though that value has taken an unusually diverse form. Think of it like this: Using his wOBA as a hitter, and wOBA allowed as a pitcher, Ohtani has been worth a combined 22 runs above average this season. That puts him pretty much in a tie for second on the Angels behind Mike Trout. When you combine the pitches he has thrown and pitches he has seen, it adds up to the workload of an everyday player. This is why if he can stay healthy in both roles for a full season, the value he can provide is so immense. We should see a month of that combination on display in September.

Miller: This would obviously depend (for my hypothetical ballot) on what Torres does, but if Ohtani throws another 30 innings, gets his ERA under 3.00, and keeps his OPS+ (now 143) higher than Torres' (now 127), would I probably change my mind? Truthfully, it's close enough and the players' seasons are comparable enough I could change my mind on a whim.

Schoenfield:If he makes three or four good starts down the stretch, I think that makes him the favorite. If you can combine a player with an OPS in the .900 range, even in a part-time role, with a player who ends up pitching 70 innings or so -- basically, the season workload of a full-time reliever -- with an ERA under 3.50, that tops whatever Andujar, Torres or Wendle can add in September. If Andujar was better on defense, he'd have a stronger case, but his defensive metrics are terrible, hurting his overall value.

What do you expect from Ohtani in the final month of the season?

Doolittle: The pitching is a wild card because we haven't seen it. However, there is no earthly reason why the Angels would be sending him to the mound if his stuff was not at or near 100 percent. If it is, we know what that looks like, though you do have to wonder what the long mound layoff might do to the sharpness of his secondary pitches for the first outing or two. As for his work at the plate, Ohtani has been remarkably consistent this season. There's no reason to think he'll decline from here.

Schoenfield: Home runs and strikeouts. I mean, the dude wore "SHOWTIME" on his jersey during Players Weekend. Nobody believes in his ability to excel on both sides of the ball more than Ohtani.

How would you grade his first MLB season overall so far?

Doolittle: Solid A. Obviously the elbow issues are a concern. He came into the majors with that problem and we saw it move from the "concern" category to the "this-is-real" category. That said, he has done so well at the plate that in my mind he has already laid to rest the idea that he can't hit and pitch at the same time. The injury can't in any obvious way be attributed to the fact that he has also DH'd. In fact, he was able to work his way back to the mound even while continuing to work as a hitter. That in itself shows why a two-way player in today's game, with its swollen pitching staffs, is such an asset. Ohtani got hurt, as young pitchers so often do, but he still was able to produce value for his team while he was healing.

Miller:Besides the health of his right elbow -- which, admittedly, is getting into "other than that, Mrs. Lincoln" territory -- it's been top of the scale. He has been one of the 20 best hitters in the game, which I just did not see coming.

Schoenfield: A-plus in the results, but the injury and missed time do knock down the overall grade. With 3.0 WAR so far and a chance to get to 4.0 by season's end, that sounds like a B-plus or A-minus to me. The Angels obviously would have preferred to get more innings from him, but given how much of the offense (well, not Mike Trout) has struggled, Ohtani's bat has been vital as well.

Do you still think Ohtani's future is as a two-way player?

Doolittle: Absolutely. I'm much more sure of this now than when he signed over the winter. Even better, I think he has opened the door for other two-way players.

Miller:If he hits too well, it gets a little harder to keep him in the two-way role -- especially now, while he's young and would presumably be a real defensive asset in the outfield. But one of the most encouraging things about this season was that a worst-case fear happened -- he hurt his pitching arm -- but it didn't keep him from hitting. In the abstract, his two-way role seemed risky because an injury in one role could cost the Angels both; but, instead, the opposite happened, and his versatility served as a bit of a hedge.

Schoenfield:Yes. If anything, since the bat has been better than projected, he has proven that he can make it as a hitter if arm injuries and surgery end up taking away some of his ability on the mound. Depending on what happens with the elbow though, maybe his future is as a DH/reliever as opposed to a starting pitcher who requires more time off before and after starts.
Report a correction or typo
Related topics:
sportsespnrookie of the yearbabe ruthmlbawardstwo way playerlos angeles angelsshohei ohtani
Copyright © 2022 ESPN Internet Ventures. All rights reserved.
TOP STORIES
1 dead after shooting near Baldwin Hills Crenshaw Plaza
2 found dead next to car outside Chatsworth school
West Hollywood's bars could see later last call
California gun owners' personal information exposed in data breach
SoCal woman opens home to women from other states seeking abortion
Woman dies after being shot on 710 Freeway in Long Beach
Source of mysterious lights over San Diego identified
Show More
Here's how some schools are trying to close gender gaps in sports
Man allegedly used homemade flamethrower at abortion protest
Witness: Trump grabbed steering wheel, demanded to go to Capitol
Official: Upgrades urged at Amtrak crash site, but no action
LA County approves transfer of Bruce's Beach
More TOP STORIES News