Models of consistency: How the Nashville Predators and Anaheim Ducks were built 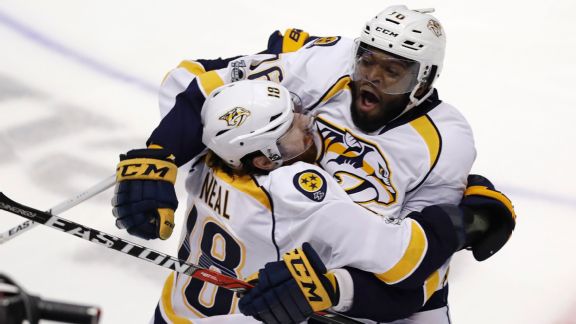 There are few shortcuts on the road to the Stanley Cup finals, and often the journey begins with solid scouting, diligent work in nerve-wracking development camps and on long bus rides through the doldrums of minor-league campaigns.

Since the 2005 NHL lockout, few teams have been as consistently successful as the two teams battling in the Western Conference finals, theAnaheim Ducks and Nashville Predators. Both have made the playoffs nine times since the lockout. The Predators have won five playoff series and lead the Ducks in the conference finals 3-2, while the Ducks have won 12 series in as many seasons -- and a Stanley Cup in 2007.

Their rosters are replete with home-grown talent, almost all of which took a path through the teams' minor league affiliates. Even the significant trade acquisitions -- such as Nashville'sP.K. Subban, James Neal, Filip Forsberg and Ryan Johansen,as well as Anaheim's Jakob Silfverberg--were obtained in exchange for homegrown products.

"You have to have quality players," Ducks coach Randy Carlyle said. "In our model, we don't want to rush people. We want to put people into situations that they can have success. And we want to make sure that they understand that we're looking for those players to make a contribution to our group for 15 years, not five years."

Predators GM David Poile has long stressed that the road to Nashville goes through Milwaukee, where the franchise's American Hockey League affiliate, the Admirals, play. Coach Peter Laviolette praised management, scouting and the development staff in Milwaukee for the preparing his players for success.

"They go through a process of learning about the game and how to be a pro, how to compete, how to play at the next level," Laviolette said. "The process continues from there, and we believe in that process and it's turned out some really good hockey players for us."