The 10 NBA teams with games scheduled on Christmas were told by the league Tuesday that shifting some game times is a possibility for the planned five-game slate if virus-related issues force changes to the lineup.

The league told the teams the priority is filling the ABC windows for Saturday's games, which means the slots at 2:30 p.m., 5 p.m. and 8 p.m. Eastern. For now, those games, in order, would have Bostonat Milwaukee, Golden Stateat Phoenixand Brooklynat the Los Angeles Lakers.


The other games on the Christmas schedule are Atlantaat New Yorkat noon Eastern, and Dallasat Utahat 10:30 p.m. Eastern. Both of those games are scheduled to be shown on ESPN.

The league called the notion of shifting game times -- which might happen if a game is postponed -- a contingency plan in the memo distributed to the teams involved and obtained by ESPN's Adrian Wojnarowski. Decisions on whether shifting times is needed could come as late as Friday. Any decisions made on Saturday to postpone a Christmas game would not impact the remainder of the day's schedule, the league said.

The NBA has postponed seven games so far this season, but none from Wednesday onward yet. About 75 players have been dealing with virus-related issues this week alone in the NBA, with more than 100 having done so at least once this season.

Some of the teams scheduled to play on Saturday have numerous players and coaches in the league's health and safety protocols right now; the Nets currently have 10 players on that list, which is the highest known figure for any team.


The 10 teams scheduled to play on Christmas had more than 30 players in the protocols on Tuesday afternoon, though those numbers can change quickly.

Other top NBA players were being added to the protocols list Tuesday, including Toronto's Fred VanVleet and Atlanta teammates Danilo Gallinari and Clint Capela -- joining a Hawks list that already included Trae Young. The league is allowing teams to sign replacements to hardship contracts when a player tests positive for the virus, with hopes such moves can minimize the need for postponements.

There were some notable removals from the protocols list Tuesday. The Lakers said Dwight Howard and Talen Horton-Tucker would be available to play Tuesday night against Phoenix. But Lakers coach Frank Vogel and four players remain out, all because of protocols. 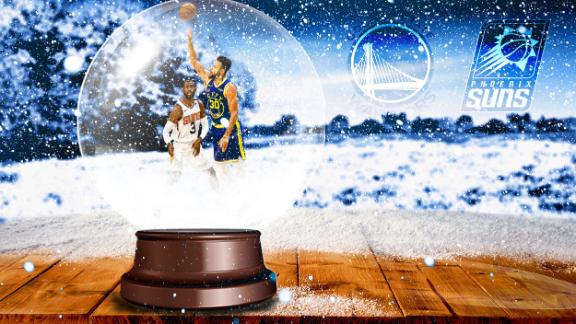