NFL playoff officiating decisions: Tyler Boyd touchdown for Bengals should not have counted due t... 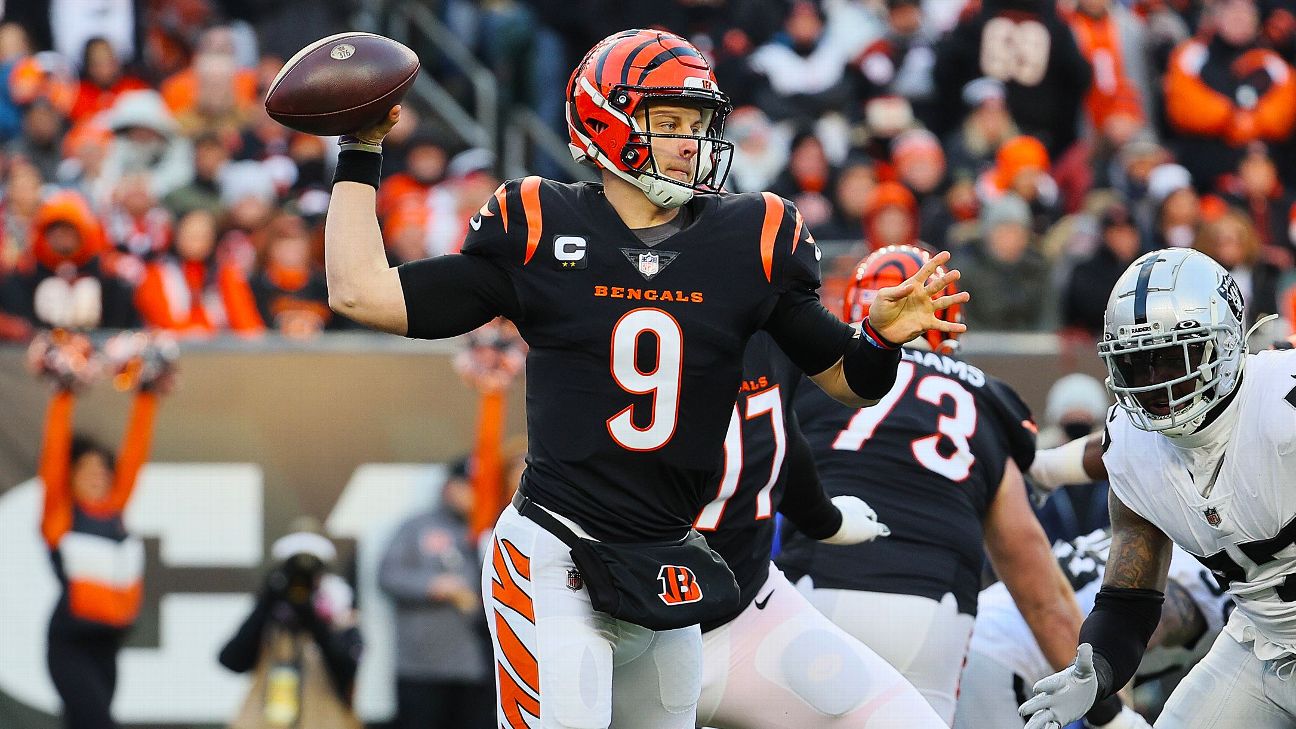 That's the longer-term context as you watch this year's postseason games. It would be a surprise if we saw many penalty-filled games, and with any luck we'll spend the next four weeks talking about the performance of players and coaches, and not about the fouls that were called (or uncalled) against them.


But there are many rules-based twists and turns to consider beyond flags. In the 2020 AFC Championship Game, for instance, then NFL senior vice president Al Riveron allowed a review for a non-reviewable play. Ultimately, he reversed a call that should not have been looked at in the game that decided who would represent the AFC in the Super Bowl.

We'll have all of your officiating needs covered in this post, which will be updated as needed with rule explanations, important context and other officiating trends. Come along for the ride. (The most recent plays are at the top.)

Was this really roughing the passer?

How it was resolved: Referee Jerome Boger threw a flag for roughing the passer. The additional 15 yards gave the Raiders a 30-yard gain in total, putting the ball at the Bengals' 35-yard line as the Raiders were driving for what could have been the game-tying (or winning) score.

Analysis: The NFL has moved in dramatic ways over the years to protect quarterbacks, creating rules that prohibit them from being hit forcibly in the head or neck area, as well as below the knee, when they are in the pocket or otherwise in a defenseless posture.

Boger did not specify why the flag was thrown, but at best, it appeared Kareem's right shoulder or arm grazed Carr's helmet. It would be up to Boger at that point to determine whether that contact was "forcible." He is not tasked with taking into account the game situation, but you would like to see any call be obvious to the viewer -- whether it is the fourth quarter of a playoff game or the first quarter in Week 1.

Carr did what he should have done; he made his case to Boger by snapping his head back and pointing to his helmet. It is always possible that another angle would show more forcible contact, but from what we could see on the NBC replay, it was not.

What happened: Bengals quarterback Joe Burrow scrambled toward the right sideline on a third-down play from the Raiders' 10-yard line. With the ball in the air, a whistle could clearly be heard on the NBC broadcast. Bengals receiver Tyler Boyd caught the pass for a touchdown.

How it was resolved: After a lengthy discussion among officials, led by referee Jerome Boger, the play was rule a touchdown.

Analysis: Unless the whistle came from the crowd or someone other than one of the seven officials on the field, this should not have been a touchdown. There are two options here. Either the whistle was intended to rule Burrow out of bounds, or it was an inadvertent whistle. In either case, NFL rules require the play to be end at the time of the whistle.

NFL rule 7, Section 2, Article 1(m) states: "[W]hen an official sounds the whistle erroneously while the ball is still in play, the ball becomes dead immediately." In this case, the rule goes on to state: "If the ball is in player possession, the team in possession may elect to put the ball in play where it has been declared dead or to replay the down."

So the touchdown should not have counted, and the play should have been re-played. It is not reviewable. Players often stop playing when they hear a whistle, and it's inherently unfair to allow post-whistle action to count.

A similar play occurred during a 2015 game between the Patriots and Bills. In that instance, referee Gene Steratore correctly halted the play, even as Patriots receiver Danny Amendola was running upfield, but erred in placing the ball at the spot where Amendola was when the whistle blew.

Postgame update: Walt Anderson, the NFL's senior vice president of officiating training and development, said in a pool report after the Bengals' 26-19 win that Boger's crew decided "the whistle for them on the field was blown after the receiver caught the ball."

Suffice it to say, Boger's judgment here does not line up with any of the available evidence. The whistle was audible on the broadcast well before Boyd caught the ball. But given the structure of the rules, this explanation is the only possible justification for allowing the touchdown.

It should be noted that Anderson didn't say anything to indicate he supported (or rejected) the explanation. He appears simply to have passed along the on-field judgment on a play that wasn't reviewable.

Still, it strains credulity for this to be the NFL's official line. Whoever blew the whistle on the field knows when he did it. The players who appeared to stop before Boyd caught the ball knew when they heard it. Millions of television viewers knew when they heard it. While it might have been painful, the more credible explanation would have been something that confirmed -- even in retrospect -- that a rule was misapplied and that the entire sequence didn't meet NFL standards.


Finally, the pool report did not include any discussion about why the NFL did not use its new video assist program to step in and correct the mistake. It's true that erroneous whistles are not reviewable, but the video assist rule allows replay officials and the league's officiating department in New York City to "advise the game officials on specific, objective aspects of a play when clear and obvious video evidence is present, and/or to address game administration issues."

What happened: Raiders kickoff returner Peyton Barber grabbed the bouncing ball near the sideline and stepped out of bounds at the 2-yard line.

How it was resolved: Barber was ruled down at the 2, putting the Raiders in terrible field position for their third possession of the game.

Analysis: Barber was trying to capitalize on a little-known NFL rule in an effort to get the ball marked at the 40-yard line. What he wanted to do was step out of bounds and then touch the ball. When a ball touches a player after he has established himself out of bounds, the ball is ruled out of bounds at that point. Had Barber stepped out first, the Bengals would have been penalized for a kickoff out of bounds, and by rule, referee Jerome Boger would have spotted the ball the 40. But because Barber grabbed the ball before that, he was ruled to have run out of bounds with possession of the ball.

Multiple teams have tried to leverage that rule in recent years by deliberately stepping out of bounds and then reaching for the ball, most notably the Green Bay Packers' Randall Cobb in 2012. 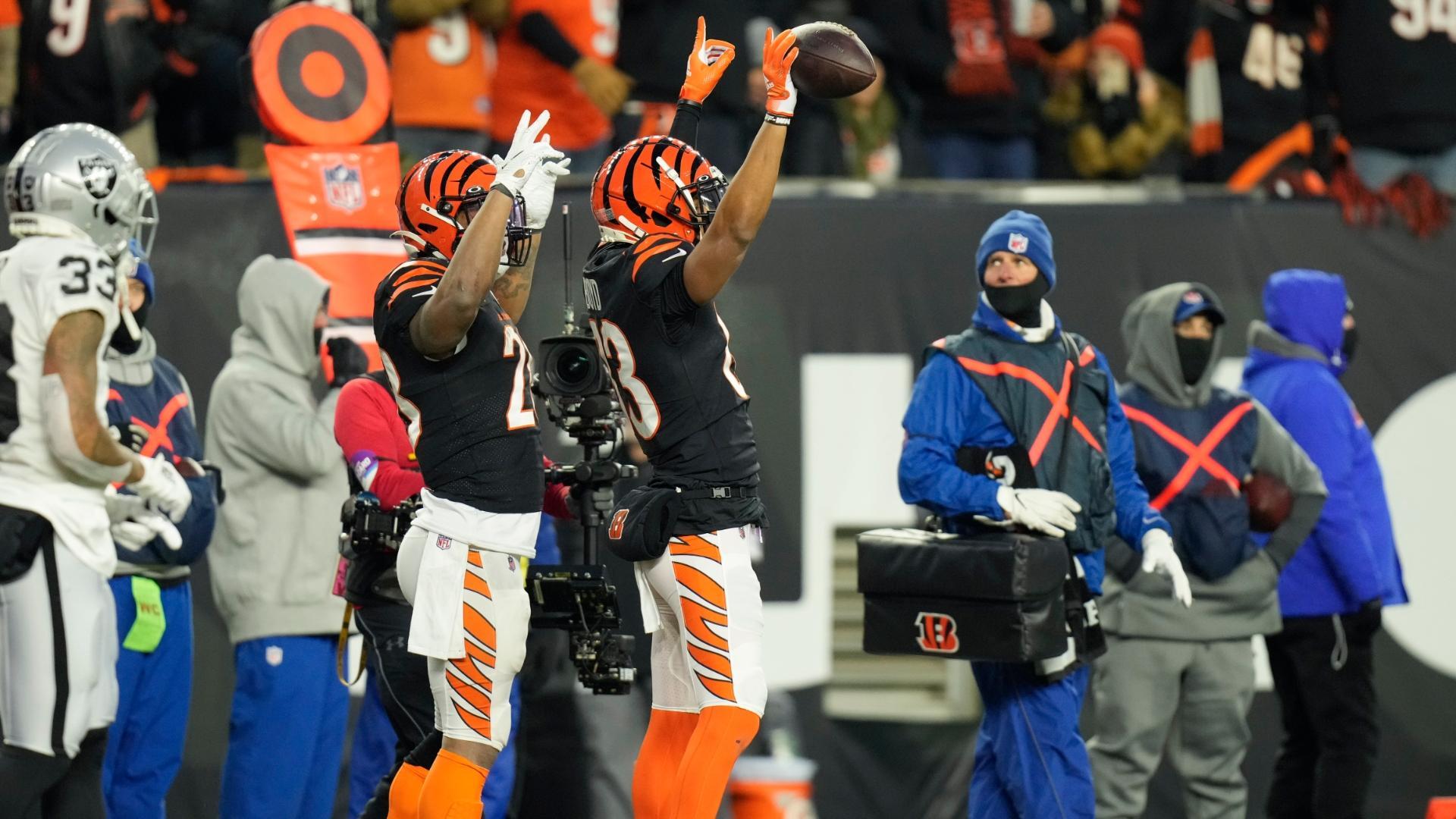 Burrow slings his 2nd TD to extend Bengals' lead
Joe Burrow finds Tyler Boyd in the back of the end zone to put the Bengals up 20-6. 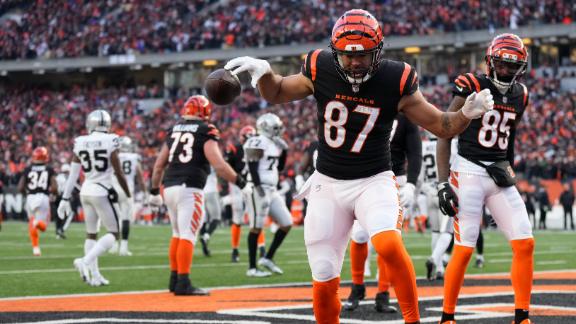 Uzomah hits the Ickey Shuffle after Burrow finds him for a TD
Joe Burrow hits C.J. Uzomah to put the Bengals up 7-3 in the first quarter vs. Raiders. 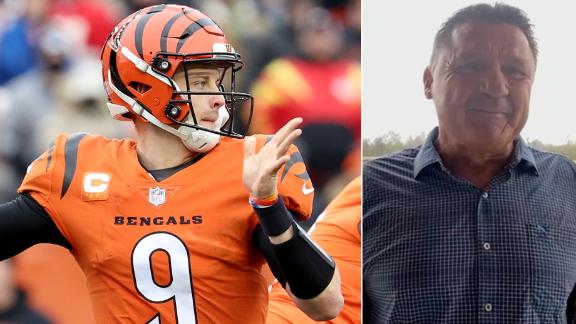