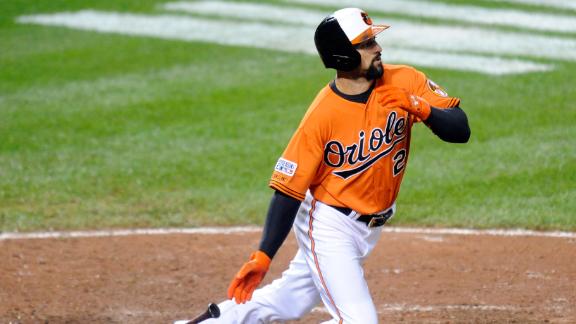 The Atlanta Braves and free-agent outfielder Nick Markakis have agreed on a four-year deal, the team announced Wednesday night.

The deal between the two sides could wind up in the range of $45 million, sources told ESPN's Buster Olney.

The Baltimore Orioles declined their half of the $17.5 million mutual option for the 2015 season on Markakis' contract, instead paying him a $2 million buyout to make him a free agent.

A two-time Gold Glove Award winner, Markakis has at least 10 home runs and 24 doubles in each season of his career.

He committed zero errors in 149 games in the field last season -- 147 in right field. In his nine-year career, Markakis has been credited with just 18 errors.

Markakis fills a void left by the recent trade of right fielder Jason Heyward to the St. Louis Cardinals. Also, it will surely step up talks on a potential deal for slugger Justin Upton, who is entering the final year of his contract, or perhaps Evan Gattis, who is set to move from catcher to left field if he remains with the Braves.