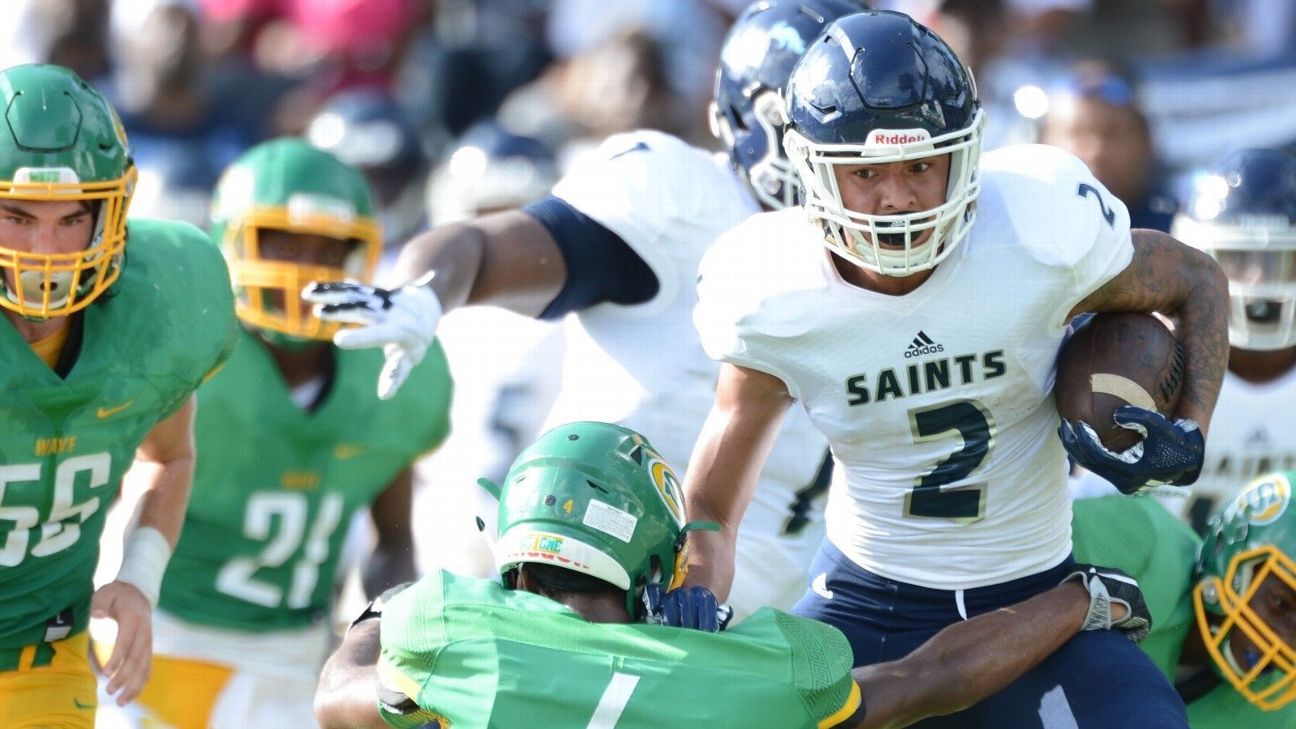 ESPN 300 wide receiver Jadon Haselwood announced his commitment to Oklahomaon Saturday at the All-American Bowl. Haselwood is a five-star who had previously committed to Georgiabut decommitted from the Bulldogs in October.

Haselwood signed in the early-signing period in December but kept his decision quiet until announcing Saturday.

Once Haselwood announced his decommitment, Miamiwas recruiting him aggressively, as were Georgia, Florida Stateand Tennessee. The Hurricanes eventually fell off, and the Sooners shot up his top list.

Haselwood, the No. 12-ranked prospect overall, is a 6-foot-3, 189-pound receiver out of Ellenwood, Georgia, and is now the third ESPN 300 receiver in the 2019 class for the Sooners. The No. 1-ranked receiver, he joins Theo Wease and Trejan Bridges in a class full of offensive talent. Now the top-ranked commit in Oklahoma's class, which is ranked No. 8 overall, Haselwood is just ahead of ESPN 300 quarterback Spencer Rattler, the No. 1-ranked dual-threat quarterback in the class.

It comes as no surprise that the top four commits in Oklahoma's class are offensive prospects, but the defense has been addressed as well, with ESPN 300 athlete Jeremiah Criddell set to play defensive back along with ESPN 300 cornerback Jaden Davis. Those two are joined by ESPN 300 defensive ends Joseph Wete and Marcus Hicks, as well as a few four-star defensive commitments in the class.

Alabamaalso got in on the action by landing ESPN 300 defensive end Khris Bogle and four-star defensive back Marcus Banks. Bogle, the No. 140-ranked prospect overall, chose Alabama over Miami, Floridaand Tennessee. Many thought Bogle would end up at Miami, but the Crimson Tide were right there and landed his commitment in the end.

Banks, a four-star defensive back from Andy Dekaney High in Houston also announced his commitment to Alabama. Banks, who was committed to LSUat one point in the process but decommitted in October, chose the Crimson Tide over Texas A&M, Florida and Florida State.

With both prospects committed and part of the No. 1-ranked class, Alabama has 28 total commitments -- 22 are ESPN 300 prospects and 27 are four-stars. The only commit not ranked as a four-star is kicker Will Reichard, who happens to be the No. 1-ranked kicker in the country.

Chris Steele, an ESPN 300 defensive back from Bellflower, California, had been committed to USC at one point in his recruitment but decommitted in October. He has now committed to Florida, adding to the No. 16-ranked class for the Gators.

Steele is the No. 98-ranked recruit overall and a tall cornerback at 6-foot-2, 182 pounds. He chose the Gators over offers from Oklahoma, USCand Oregon,among others, and is the second ESPN 300 commitment this week for Florida, joining ESPN 300 wide receiver Arjei Henderson, who announced his commitment at the Under Armour All-American game.

With Steele on board, the Gators now have 12 ESPN 300 commitments and are starting to creep higher up in the class rankings as we approach the February signing period.

Tyrique Stevenson, the No. 100-ranked recruit overall, committed to Georgia at the All-American game on Saturday.

Georgia already had the No. 2-ranked class, behind Alabama, coming into the day and added to its haul with Stevenson, an ESPN 300 athlete out of Miami. Stevenson chose the Bulldogs over Miami and is likely to play defensive back for Georgia.

His commitment gives Kirby Smart and his staff 17 ESPN 300 commitments in the 2019 class, including two five-star signees in defensive end Nolan Smith, the No. 2-ranked prospect overall, and offensive lineman Clay Webb, who is the No. 1-ranked center in the country.

ESPN 300 wide receiver Kyle Ford committed to USC at the game. Ford, ranked No. 58 overall out of Orange Lutheran in Orange, California, adds some size at the wideout position at 6-foot-2, 209 pounds, and chose the Trojans over a few Pac 12 teams, including Washington, Colorado and Oregon.

USC landed a commitment from ESPN 300 athlete Bru McCoy as well. McCoy is the No. 32-ranked prospect in the country and could help the Trojans on offense or defense. He is highly thought of at wide receiver, and given USC's struggles on offense, he has an opportunity to earn early playing time if he is slotted at receiver. McCoy, a 6-foot-3, 205-pound prospect, already has some chemistry with current USC quarterback J.T. Daniels and receiver Amon-Ra St. Brown, as all three attended Mater Dei High School in Santa Ana, California.