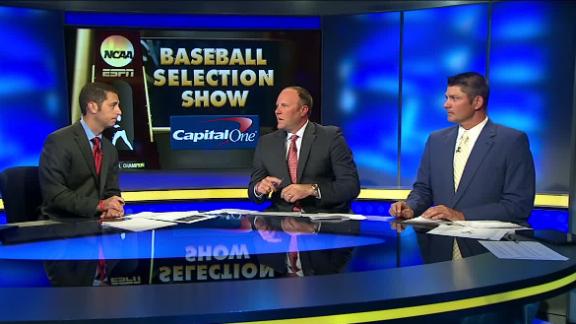 The committee on Monday made the Pac-12 champions the top seed for the NCAA tournament over SEC regular-season winner Florida and a Virginia team that has been one of the most consistent in the nation but failed to win an ACC title.

"I thought if you took Florida and Oregon State and Virginia, you could find a reason for any of them to be the [No. 1] seed," Beavers coach Pat Casey said. "When it came down to the fact neither Florida or Virginia were automatic qualifiers, I thought that might swing it our way."

The other five national seeds, in order, are Indiana, Florida State, Louisiana-Lafayette, TCU and LSU.

Oregon State (42-12) is the No. 1 seed for the first time after being No. 3 a year ago. The Beavers have one of the nation's best starting rotations in Ben Wetzler, Jace Fry and Andrew Moore and one of the top offensive players in the country in left fielder Michael Conforto.

Florida (40-21) won the SEC regular-season title for the third time in five years and reached the conference tournament final. The Gators' schedule ranks as the toughest in the country, and they are 16-5 in one-run games.

Virginia (44-13) has the ACC's top pitching staff, headed by sophomore left-hander Nathan Kirby, but the Cavaliers lost four of their last six games.

The tournament opens Friday with 16 four-team, double-elimination regionals. Best-of-three super regionals will be held next week, with those winners moving to the College World Series in Omaha.

National seeds that win their regionals play at home in super regionals.

The Southeastern Conference has 10 teams in the tournament, the most ever by a conference. The Atlantic Coast Conference is represented by seven schools, the Big 12 and Pac-12 by five apiece and the Big West by four.

Thirty-two of the 64 teams were in the field last year.

Miami is in the field for the 42nd straight year, extending its record. Florida State is in for the 37th season in a row, second all-time.

UCLA (25-30-1) will not get a chance to defend its national title. The Bruins didn't make the tournament for the first time since 2009 after finishing ninth in the Pac-12 in an injury-plagued season.

Casey said his team's No. 1 seeding didn't come with an easy path to Omaha. Barring an upset, the Beavers would be matched against Big 12 regular-season champion Oklahoma State in a super regional.

"I have no complaints," Casey said. "It's a tough job, trying to balance it out. You could take every regional, and everybody would have something to say."

Miami coach Jim Morris isn't pleased with the prospect of his ACC regular-season champion team having to play at Florida in a super regional. Though Farrell listed Rice and Vanderbilt as teams that were edged out for national seeds, Miami was in the running for one before it lost two of three in the ACC tournament.

"You never know the rhyme or reason for where you're going to go," Morris said on the ESPNU selection show. "It makes no sense to me, if we're on the borderline, to be going to possibly the No. 2 seed."

Florida will be challenged this weekend. It will be hosting the Big West's second-place team in Long Beach State, a North Carolina squad with lots of postseason experience and a 41-win College of Charleston that's the bottom seed in the regional.