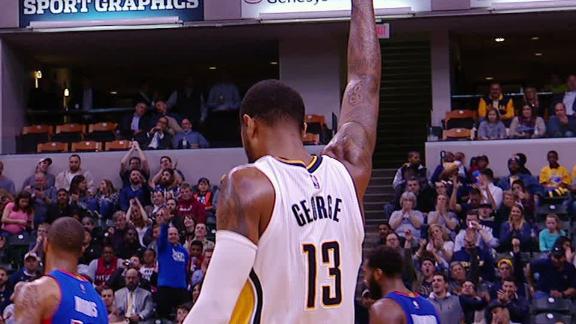 Paul George did not make the All-NBA teams announced Thursday, which means the Indiana Pacers will likely be unable to sign the All-Star to a contract extension this summer.

Had George made one of the three teams, he would have qualified for the new Designated Player Extension that is part of the new collective bargaining agreement that starts July 1. That designation would've allowed the Pacers to offer George the richest contract in NBA history -- and add up to five years and approximately $210 million to his contract.

That is about $75 million more than another team could guarantee George were he to sign elsewhere if he opted for free agency in 2018. This new provision was built into the system following Kevin Durant's departure from the Oklahoma City Thunder in free agency last summer.

The Pacers could still offer an extension to George this summer, but he doesn't have as much financial incentive to do so. Because of this, there has been speculation that the Pacers may test the trade market for George because they risk losing him after next season.

Several teams made trade offers for George in February, including the Atlanta Hawks, who offered four first-round picks in exchange for him. George, who grew up as a Kobe Bryant fan in Southern California, has expressed an interest in playing for the Los Angeles Lakers in the past.

New Pacers president Kevin Pritchard, who met with George after the team was eliminated from the playoffs by the Cleveland Cavaliers, told reporters that George expressed an interest in staying long-term but made it clear he wanted to be on a contender.

The Pacers could wait and see if George makes the All-NBA team next season, because he'd then be eligible for the massive $200 million-plus deal while other teams could only guarantee about $130 million.

Players qualify if they make the All-NBA team the year before the extension or are named Most Valuable Player or Defensive Player of the Year. It only applies to players going into their eighth or ninth seasons when the contract takes effect. It's a narrow window of players, but in this case the stakes are high.

The vote also had an impact on Utah JazzAll-Star Gordon Hayward, who did not make the All-NBA teams. He has the option to be a free agent this summer, but he only has seven years of experience -- making him ineligible for the $200 million deal unless he picked up his $16.7 million option for next season. Hayward is now assured to become an unrestricted free agent on July 1.

The All-NBA teams were announced Thursday, with James Harden leading the way as a unanimous first-team selection. He was joined on the first team by by LeBron James, who tied an NBA record with his 11th All-NBA selection, Russell Westbrook, Kawhi Leonard and Anthony Davis.