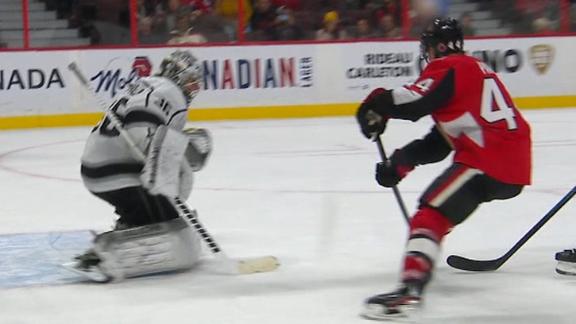 Jean-Gabriel Pageau scored 3:12 into overtime to give Ottawa a 3-2 victory over the Los Angeles Kings on Thursday night.

After Tyler Toffoli tied it for Los Angeles with 8 seconds left in regulation, Pageau scored off his own rebound for his team-leading seventh goal of the season.

"We're starting to build something here," Pageau said. "I think we played a solid game overall. Slow start at the beginning but after that I think we took over."

Dustin Brown also scored for the Kings, and Jack Campbell made 25 saves.

"I don't think anybody in this room wants to be playing to lose," Toffoli said. "We're playing to win games and we're frustrated," he said. "We want to be winning games and that's a big point we all wish we could have had."

Game notes
Jonathan Davidsson made his NHL debut for Ottawa after being called up from the AHL's Belleville Senators. ... Trevor Lewis left the game for the Kings midway through the second with a lower-body injury. He didn't return. ... Ottawa said before the game that forward Colin White has been assigned to Belleville after being out since Oct. 23. He'll be on a conditioning stint while recovering from a hip flexor/groin injury. ... The attendance was 9,929.

Kings: At Montreal on Saturday night.

Pageau collects his own rebound for OT winner
Jean-Gabriel Pageau gets his own rebound off a wrister and gets the puck by the goalie for the Senators' 3-2 overtime win vs. the Kings.
Report a correction or typo
Related topics:
sportsespnnhlottawa senatorslos angeles kings
Copyright © 2020 ESPN Internet Ventures. All rights reserved.
More Videos
From CNN Newsource affiliates
TOP STORIES