Patrick Willis out for rest of season 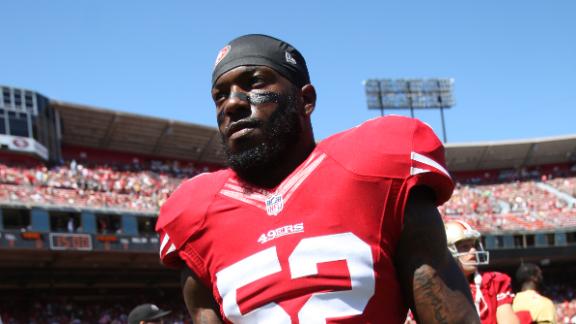 San Francisco 49ers linebacker Patrick Willis will miss the remainder of the season and needs surgery for his strained muscle in his left big toe.

The team placed him on season-ending injured reserve Tuesday and filled his roster spot by signing running back Alfonso Smith to a one-year contract.

"It's very frustrating,'' Willis said. "My teammates mean everything to me and I want to be out there experiencing all the good times and all the rough times with them.''

A seven-time Pro Bowler, Willis has missed the past three games for San Francisco (5-4) after injuring the toe in the third quarter at St. Louis on Oct. 13. He had 34 tackles and an interception this season for the Niners, who have reached the NFC Championship Game in each of the past three seasons.

Willis had hoped the injury wouldn't sideline him long term. He missed practice last week after returning in a limited role the previous week.

"This is something I have been dealing with for a long time now,'' Willis said. I want to get it done so I can get back to rehabbing and get back to form.''

Willis indicated his toe has been bothering him for several years and that he continued to play as long as he could stand the pain.

"I always think I can do more than I'm supposed to and tried to compensate,'' Willis said. "Sometimes guys are hurting, and hurting bad, and still go out and play. You could say I should have done this earlier, before I hurt it worse against the Rams.''

After resting through the Oct. 26 bye, Willis was back as part of the 49ers' full active squad on the field for the start of practice Oct. 29, but he had been limited primarily to individual work.

"I felt, maybe just give it a couple of weeks but it just didn't get better,'' Willis said. "I feel like I have five or six years left in my body so I have to think about the big picture. I promise you when I come back I will be bigger and better than I was.''

This is a big loss to one of the NFL's leading defenses, although the 49ers are expected to have Aldon Smith back Sunday on the road against the New York Giants.

"Hopefully I can get in there and play as much as I have,'' Smith said. "I want to stay strong, keep my eyes on the prize and I'm ready to do that.''

Smith is set to begin practicing this week after serving his nine-game suspension by the NFL for violations of the league's substance-abuse and personal-conduct policies.

"I did everything that was necessary,'' Smith said. "I've learned a lot and ready to move forward.''

In addition, 2013 All-Pro NaVorro Bowman could be cleared to begin practice this week, opening a 21-day window for the team to activate him or place him on injured reserve.

Bowman is recovering from surgery on his left knee after he tore the ACL and MCL in a devastating injury in the NFC Championship Game loss at Seattle this past January.

Rookie Chris Borland has filled in for Willis and been spectacular, recording 18 tackles in a loss to the Rams two weeks ago, then 17 more tackles in an overtime win at New Orleans on Sunday.