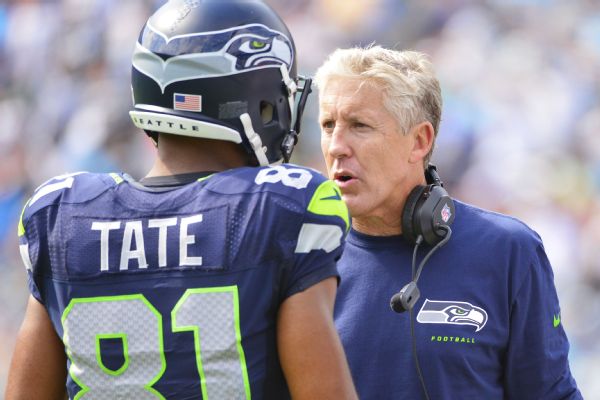 "We did try to bring him back," Carroll said in a conference call with Detroit reporters. "We made an offer that didn't get communicated really well at the time, and I think he's a terrific player. I loved him on our team, but you can't keep everybody, and so during the process of the negotiations, he went elsewhere.

"But our players and our coaches, we think the world of him, and he's fun to watch. We watch him every week, and we'll have a good time competing against him."

Tate is in his third season with the Detroit Lions, who will visit Seattle for a playoff game against the Seahawks on Saturday night.

Asked to expand on his comments, Carroll referred questions to Tate's agent, Todd France. An email from ESPN to France seeking comment was not immediately returned.

Later Tuesday, Carroll clarified that he thought the breakdown of communication came from the Seahawks and not France.

"I was disappointed that we didn't communicate with Golden really clearly our end of it. So now it becomes a negotiation where I didn't feel like he had all the information he needed. And we needed to do a better job of that," Carroll said.

"I felt when I realized what had happened, we were too late to really make a shot at it. The thing happened the first week of free agency. It's crazy that time of year. Stuff was flying and all that, so we lost him. But that doesn't mean we wouldn't have lost him no matter what, because he got paid really well, he got a great contract and all that. I just wish we would have communicated better so everybody would have had the information."

Tate said Tuesday that his free agency "happened so quick, I don't even know. Maybe that is what happened, but I don't know."

The Lions eventually offered Tate a five-year, $31 million deal with an $8 million signing bonus. Soon after taking the deal, Tate went on Seattle radio station 710 AM and called the offer from the Seahawks "laughable."

At the time, Tate said he felt Seattle fans expected him to take too much less to stay with the Seahawks, who just won Super Bowl XLVIII.

On Tuesday, Tate said he thought the Seahawks wanted him to return.

"I thought they wanted me back. I thought I did everything I could to help them win a Super Bowl, was in the community, was a good guy," he said. "But you know, it worked out. I'm happy where I am and excited about the future of this organization and hopefully I'm here for a long, long time."

When asked Tuesday about Tate's contention about the offer being laughable, Carroll explained that although the Lions were going to offer him more money anyway, the coach was bothered that Seattle's interest wasn't properly conveyed to the wide receiver.

"I don't remember those numbers at the time, but I'll just tell you this: There was a time that Golden didn't know that we made him an offer and he thought we didn't, and that's because it wasn't communicated," Carroll said. "I just felt bad about that. I don't even know what the numbers were at the time, but that wasn't even the point. We were interested in bringing him back and he didn't get that sense from us, and I was disappointed in that.

"They were going to go higher than we were able to go anyway, and I just think the world of him. That's my opinion of it, and at this point, I could care less about it."

Tate said the only backlash he has received from Seahawks fans are those who are "ignorant people."

"But anyone who has had an encounter with me or spent time with me and actually researched who I am as a person, I still get support," he said.

"A lot of people reached out on my social media who are Seahawks fans and said, 'Hey, you are my favorite player. I'm excited to see you come back to town. Unfortunately I'm going to have to root for the Seahawks, but I'll be wearing your Seattle jersey.' It's always good to have somewhat of a legacy like that."