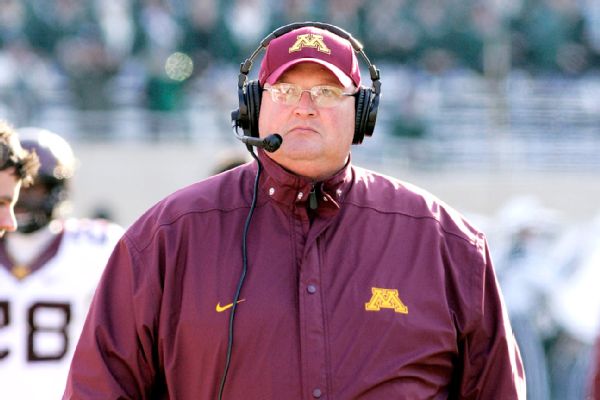 More than 400 "concerned citizens" have signed a petition calling for theUniversity of Minnesota to fire football coach Tracy Claeys for his response to a recent player boycott.

Released Monday, the MoveOn.com petition centers on the Dec. 15 tweet that Claeys posted hours after the team announced its boycott, which came in response to the university suspending 10 players for involvement in an alleged sexual assault involving a female student. Minnesota players began the boycott because they believed that teammates had been denied due process from the university's Title IX office, especially five players who were never investigated by Minneapolis police or Hennepin County prosecutors.

Claeys tweeted: "Have never been more proud of our kids. I respect their rights & support their effort to make a better world!"

The petition notes that Claeys' tweet "failed to mention or acknowledge the importance of respecting women. Further, it did not condemn violence, sexual assault or disrespect of women. We feel this is not at all acceptable."

Organizers have sent the petition to university president Eric Kaler and athletic director Mark Coyle. They also plan to send it to the university's board of trustees. Minnesota players ended their boycott Dec. 17, and Claeys will coach them Tuesday against Washington State in the National Funding Holiday Bowl.

Joe Nathan, a petition organizer who earned two graduate degrees from Minnesota and worked in the past with Gophers student-athletes, teaching them leadership skills, told ESPN that in addition to the tweet, Claeys failed by allowing a recruit to accompany players when the alleged incident occurred.

"The involvement of a recruit in this horrendous situation, in and of itself, is grounds for termination," Nathan said. "The explicit language in his contract says he is in charge of recruiting and he is in charge of promoting moral integrity. He clearly failed to exercise the kind of leadership that is necessary."

Nathan said the petition is signed by parents, teachers and University of Minnesota alumni, who are "just furious and say this is not what we want for leadership."

Claeys said after the boycott ended that he wished he had chosen his words more carefully in the tweet but that he needed to support "their actions to try to improve the due process" for the suspended players. He also told WCCO radio that he planned to donate $50,000 to help support victims of sexual assault.

"There was a very intensive investigation," Nathan said. "He came down on absolutely the wrong side if he talked about being proud of the team. He should have said he's also deeply concerned about what happened to that young woman. Last week, he didn't say that. At the critical moment when his team was boycotting and he was in a leadership position, he didn't stand up."

Claeys, who became Minnesota's head coach last fall after Jerry Kill's health issues forced him to retire, is signed through January 2019. He earned $1.4 million this year and is set to earn $1.5 million in 2017. The St. Paul Pioneer Press reported in November that the school is exploring a contract extension for Claeys.

"Coaches are in a challenging position," Kaler said after the boycott ended. "They need to support their players. They need to motivate their players. At the same time, they need to be responsible for their actions, and there are times in which those two demands put coaches in very difficult positions. I think some of our coaches around this issue were in that very difficult position, and we'll talk about that with them and try to improve both their understanding and our understanding."
Related topics:
sportsespncollege footballpetitionminnesota golden gopherstracy claeysplayer boycott
Copyright © 2021 ESPN Internet Ventures. All rights reserved.
TOP STORIES
Newsom says vaccinated CA workers won't have to wear masks after June 17
Suspect arrested in hit-run death of Long Beach security guard
Video shows brazen theft at SF Walgreens store
SoCal heat wave expected to strain power grid
SoCal forecast: Excessive heat warning to take effect
Aiden Leos to be memorialized at Orange County Zoo
Evacuations lifted for brush fire in Lake Casitas area
Show More
SoCal woman overcomes homelessness after sudden job loss
GA cashier shot, killed after argument over face masks: Sheriff
Family pays tribute to OC man beaten to death outside own home
Disneyland dropping mask policy for fully vaccinated guests starting June 15
Former Delta flight attendant to face charges after LAX flight diverted
More TOP STORIES News