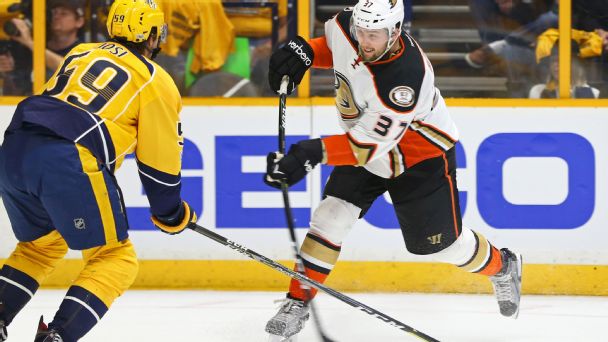 ANAHEIM, Calif. -- As the Anaheim Ducks have made adjustments and juggled lines, winger Nick Ritchie has emerged as a steady contributor at the moment and a building block for the future.

In Game 4 of the Western Conference finals against the Nashville Predators on Thursday, he scored a massive goal to put the Ducks up 2-0. Though a series of penalties jeopardized a game that the Ducks ultimately won 3-2 in overtime to deadlock the series at 2-2, Ritchie's goal was the latest in a string of impressive tallies for the second-year player.

He has moved up to Anaheim's No. 1 line with Ryan Getzlaf. That move has paid dividends in the form of the winning goal in Game 2 against Nashville and the series-winning goal against the Edmonton Oilers in the second round. All four of his playoff goals have come by way of his accurate, heavy and distinct wrist shot.

Ritchie also has a unique element to his shot, which was on display in Game 4. After getting the puck in front of Nashville defenseman Roman Josi, he patiently held the puck away from his body while still getting a clean release and plenty of power on his shot, even despite a partial deflection. The goal was a familiar sight for Ritchie both on the ice and on the lacrosse field, where he excelled during his youth in lacrosse-crazed Orangeville, Ontario.

"I think a little bit of that ability goes back to his playing lacrosse growing up," said Jody Hull, who coached Ritchie with the Ontario Hockey League's Peterborough Petes. "Lacrosse guys shoot with their hands away from their body, not in tight, and he's able to do that on the ice."

Ritchie's appetite for the big stage also was evident as a junior player, according to Hull. In his final year in the OHL, Ritchie won gold with Team Canada at the world junior championships, playing a variety of roles and gleaning tips from other top players. When he returned to Peterborough, he asked to be traded to a more competitive team. The Petes acquiesced, sending him to the Sault Ste. Marie Greyhounds. He responded by posting 26 points in 14 playoff games, well ahead of his regular-season pace.

"I was pretty fortunate at the time to get some playoff action, where I didn't really get that earlier in my junior [career]," Ritchie said. "Obviously, the NHL playoffs is a lot different and ramped up even more. But I guess all those things along the way do help to get to this point."

At the professional level, Ritchie confronted the same challenge that other big, beefy forwards such asPatrick Maroon and Chris Stewarthave faced. Blessed with exceptional size and strength, they were challenged to keep their weight down and become leaner, faster skaters to adapt to the pace of today's NHL.

Eakins echoed that sentiment: "He finally got to a point where he understood that he's going to have to eat and to train a certain way to be successful on the ice."

Ritchie was drafted with the pick the Ducks received along with Jakob Silfverbergin theBobby Ryantrade with theOttawa Senators. Although Ryan has scored critical goals this year during the playoffs, he has been a big-ticket, small-production player for extended stretches with the Senators. At a lower combined cap hit than Ryan, Silfverberg and Ritchie are now among Anaheim's top six forwards. While Ritchie's role is still taking shape, Silfverberg has become one of the best two-way players in the league and a clutch performer as well, scoring nine goals (two winners) this postseason.

Ritchie, Silverberg and Rickard Rakell, a late first-round pick turned 30-goal scorer, have all deepened the Ducks' attack -- a development that is even more important given the injuries to the Predators'Mike Fisher and Ryan Johansen. Where in the past their fate swung heavily with the surges and lulls of Getzlaf and Corey Perry, the Ducks now have weapons spread across four lines in addition for formidable offensive potency on defense.

Ritchie might continue to be a difference-maker. He has adjusted to rising standards and soaring stakes, whether it be in the world juniors or the Stanley Cup playoffs with one of the league's most consistent organizations.