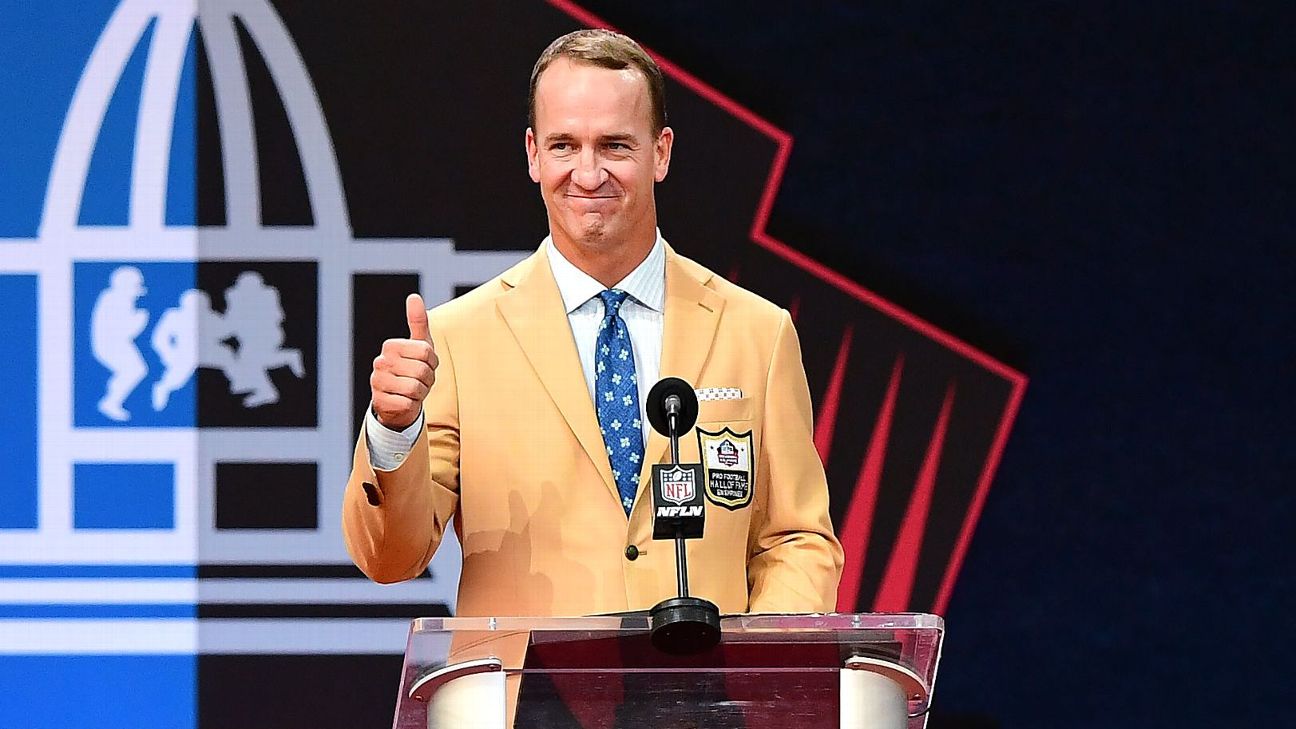 CANTON, Ohio -- The Pro Football Hall of Fame's class of 2021, headlined by three players who were in their first year of eligibility, closed out the Hall's biggest enshrinement weekend Sunday night at Tom Benson Stadium.

Here are some of the highlights from the seven newest Hall of Famers who spoke from the podium Sunday in the order they appeared, as well as social media and congratulatory messages from their former rivals, teammates and loved ones:

The résumé: A former college quarterback who made the Cowboys as an undrafted rookie wide receiver, he was the only first-team selection to the All-Decade team of the 1970s who had not been enshrined in the Hall of Fame. Like many senior finalists, his career had to be looked at in the context of his era, given that his 58 catches in 1976 and 870 yards in 1977 led the league. A three-time All-Pro, he averaged at least 17 yards a catch in five seasons, including four of his first five years in the league.

The résumé: As a player, assistant coach and head coach in pro football, Flores has four Super Bowl rings and one AFL championship to his credit. Flores and Hall of Famer Mike Ditka are the only people in NFL history who have been Super Bowl winners as players, assistant coaches and head coaches. His time with the Raiders included two Super Bowl wins and an 8-3 postseason record for a .727 winning percentage that ranks him behind only Vince Lombardi.

He said it:"The reason I'm here and the reason I'm second in the program tonight is I'm 84 frappin' years old, I have to go to bed at 9 o'clock. Where's my pillow? ... Our first house had dirt floors and no indoor plumbing. ... [In 1960] we were just a bunch of guys without a home stadium and most of the guys didn't know where Oakland was, I had to tell them. ... That's what brought me to this stage tonight, passion. ... The passion that you have sustains you in professional football. ... Today on this stage, we're all on one team, a team of gold jackets."

The résumé: One of the league's most decorated players, Manning was a five-time MVP, a 14-time Pro Bowl selection and a seven-time first-team All-Pro selection who won two Super Bowls. At the time of his retirement, he held NFL records for passing touchdowns (539), passing yards (71,940) and quarterback starts won by his team (186, tied with Brett Favre). His single-season records of 5,477 yards passing and 55 touchdowns, set in 2013 with the Broncos, still stand.

He said it: "Tonight's speech is the ultimate hurry, hurry. ... Ray [Lewis] just finished giving his speech and he started in 2018. ... I think it's pretty cool to be on the same team as Johnny Unitas and Slingin' Sammy Baugh. ... Dad, there's no one I would rather have or be more appropriate to present here. ... To Jim Irsay and the Indianapolis Colts, my gratitude to you is off the charts. ... To Pat Bowlen, the Bowlen family and the Denver Broncos organization, you took a chance on me at a crucial time in my life and I will never forget it. ... The future of this game is ours to shape, we just need to take tomorrow on our shoulders as easily as we donned our pads for games. ... God bless you and God bless football."

The résumé: The San Francisco 49ers' general manager was a nine-time Pro Bowl selection as a player, two-time first-team All-Pro selection and a Super Bowl winner. A highly touted baseball prospect who was once a second-round pick of the Marlins, he developed into one of the NFL's best safeties. He had eight 80-tackle seasons, including 84 tackles in 2006 at age 35, and three with over 100 tackles.


He said it: "What a humbling honor. ... Nothing about my Hall of Fame journey has been easy. I waited eight years and then [Hall of Fame president] David Baker tells me I'm following Peyton Manning; thank you David. ... One day I received a call from the late, great Bill Walsh and he said, 'John, I watched our defense from last year and you were our best player on defense, you can be a Pro Bowl safety.' ... Herm [Edwards], you were also the first person who told me I could have a bust someday in Canton, but only if I believed that. ... In football we quickly discover we're only as strong as our weakest link. ... Each of us comes from a different walk of life, but when we huddle up, we huddle up as a team."

He said it: "Trying to keep my emotions in check here, so all y'all chill out. ... As many of you know I'm not one of many words, but I try to make my words count. ... The pain began to take a toll on my body and my quality of life. ... But I was OK with this, because I left it all on the field and enjoyed every moment. ... There are so many people in pain right now, I want to speak to you for a moment, I want you to know I see you. ... Lions fans, and city of Detroit, when we were 0-16, you never stopped showing up. You loved me and my family unconditionally. ... This right here [pointed to bust], this is a good thing."

The résumé: Faneca was so athletic and versatile that his string of first-team All-Pro selections was broken only because the team needed him to play left tackle for much of the 2003 season. A nine-time Pro Bowl selection as well as a six-time first-team All-Pro, he is one of 12 guards in league history to be a first-team All-Pro six or more times -- the other 11 were already enshrined in Canton. His teams were among the league's top five in rushing six times in his 13 seasons and led the league twice.

He said it: "Perhaps the best word is simply gratitude. ... I have always told myself and spoken about the fact epilepsy is part of me, but it does not define me. We are in charge of our destiny. ... Be resilient. We all get knocked down in life, it's how we get up that matters. ... Without my teammates, all of you, I would not be up here today. ... My brothers, I love you guys, you are all standing with me tonight. ... My beautiful wife, Julie, you are my champion."

He said it: "Look no further than my mama to figure out where I get it from. ... I watched her every day as a child get up and work her fingers to the bone to make sure she provided for our family. ... You hear people say a woman can't raise a man, I call bulls---. ... [To his children] You'll understand why grown men stand up here and cry. ... Love your mother the way that I love mine. ... Anybody who's a fan of the way I played football, you stand up, too. ... Keep standing, don't sit down, stand up, we did this together, me and you. ... When I say, 'when I go in, we all go in,' I mean that from the bottom of my heart. ... Build your legend, thank you, we in the Hall of Fame, baby."

One member of the 2021 class was honored posthumously, with his bust unveiled on stage and a video tribute played on the stadium's video boards:

The résumé: Nunn started his career with the Steelers as a part-time scout while also working for the Pittsburgh Courier, where he was sports editor and then managing editor. He was the first evaluator in league history to show an NFL franchise the long-term value of scouting players at historically Black colleges and universities. The Steelers' draft in 1974 alone, and Nunn's role in it, was probably more than enough to get him in the Hall of Fame. In that draft, the Steelers selected four future Hall of Famers: Lynn Swann, John Stallworth, Jack Lambert and Mike Webster. They then signed a fifth future Hall of Famer -- safety Donnie Shell -- as an undrafted rookie. In all, the Steelers drafted 11 future Hall of Famers in Nunn's tenure, not including Shell.

Class of 2021 photos, videos and more

Read more on these NFL legends

J. Johnson: 'How 'bout them Cowboys?'

Get to know this year's HOF classes 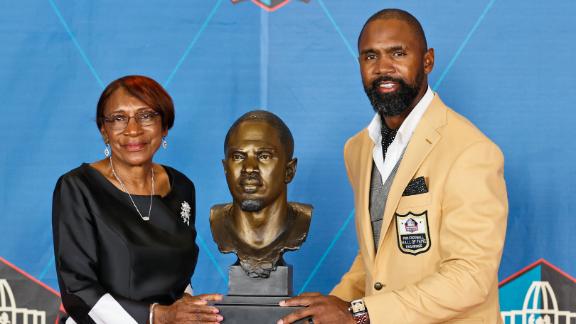 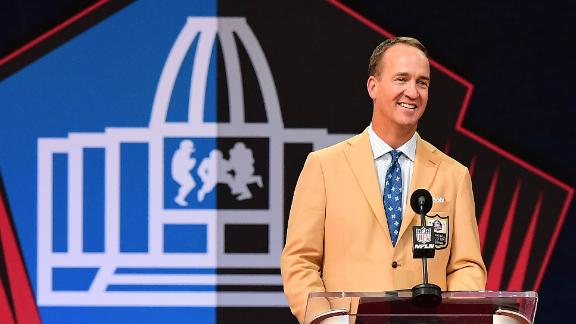 Peyton Manning delivers a HOF speech full of jokes and emotion
Peyton Manning makes a Hall of Fame speech for the ages as he cracks some jokes and reflects on the game of football. 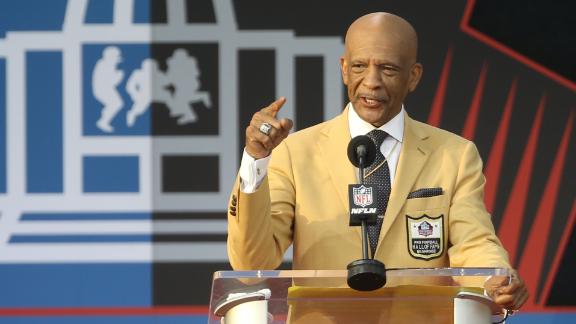 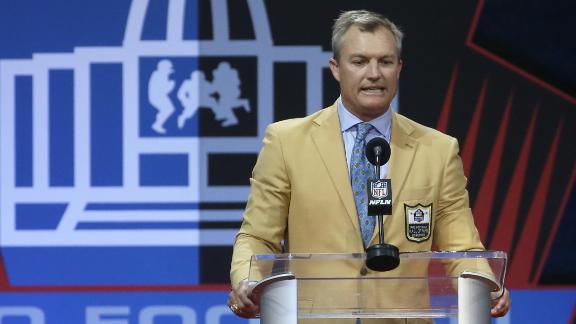 John Lynch explains how Bill Walsh shaped his HOF career
Former Buccaneers and Broncos safety John Lynch tells the story of how coach Bill Walsh instilled the confidence in him to become a Hall of Fame player. 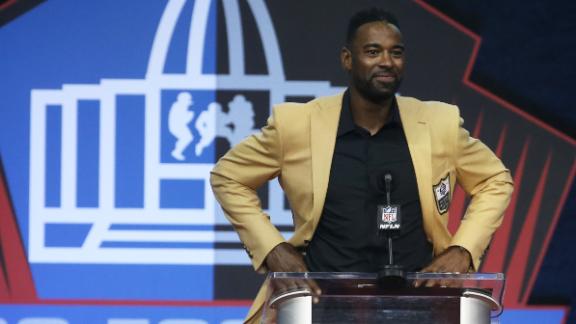