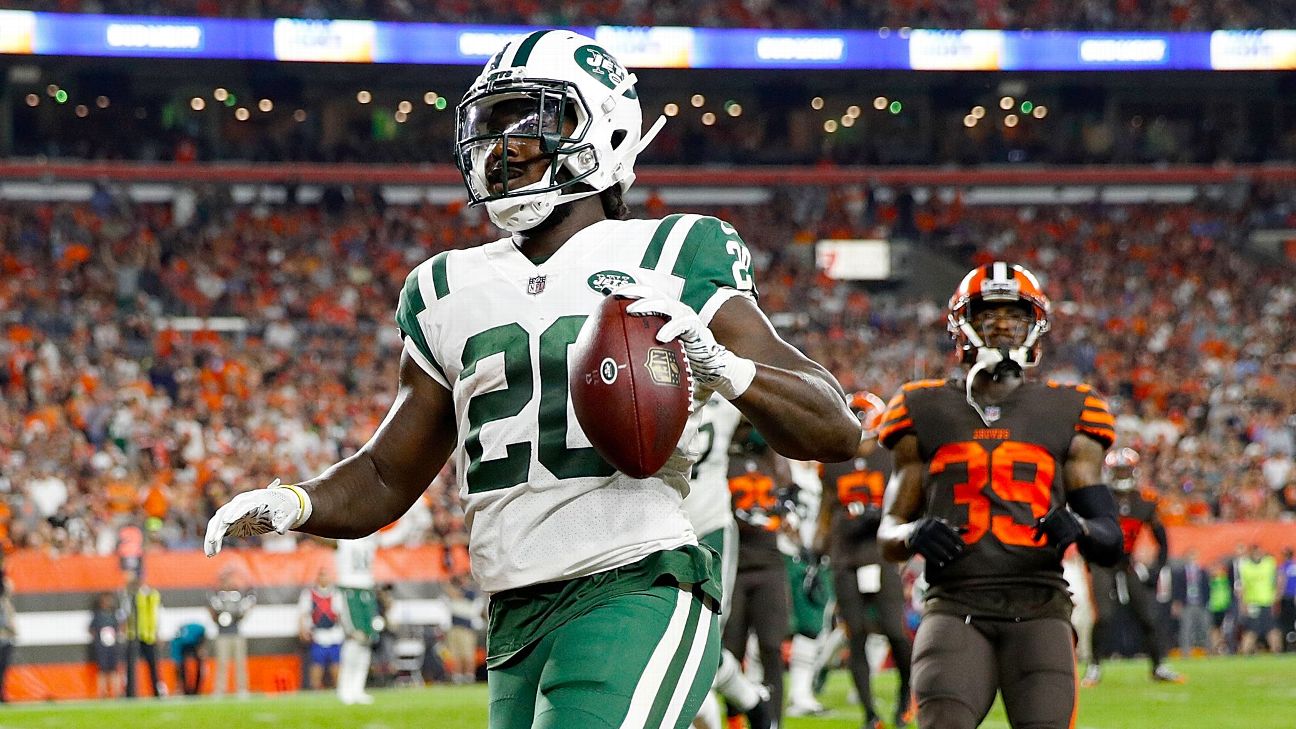 The Oakland Raidersannounced the signings of running back Isaiah Crowell and linebacker Brandon Marshallon Thursday.

Crowell's addition likely ends any chance Martin will return to the Raiders. Coach Jon Gruden said Tuesday at the NFL meetings that the door was "always open" for Lynch to return.

Crowell became a free agent when he was released by the New York Jets on March 14, a day after the team agreed with running back Le'Veon Bell on a four-year contract.

Crowell, who turned 26 in January, was one-and-done with the New York Jets. After four seasons with the Cleveland Browns, he signed a three-year, $12 million contract ($4 million guaranteed at signing) and became the starting running back last season.

He rushed for 685 yards, six touchdowns and a 4.8-yard average, but it was an odd season in that one-third of his production came in one game. In a Week 5 victory over the Denver Broncos, he set the franchise record with 219 rushing yards.

The most amazing part about it was he needed only 15 carries -- a remarkable 14.6 per-carry average. It was the highest average in a game (minimum: 15 attempts) by any player in NFL history.

Crowell's season dipped sharply after his record-setting day, as he eclipsed 49 yards only once for the remainder of the year. He battled foot and ankle injuries and finished on injured reserve.

He created national headlines with an unsportsmanlike-conduct penalty in Week 3 at Cleveland. After scoring against his former team, Crowell celebrated by pretending to wipe his rear end with the ball, which he threw into the ground.

Crowell received a public rebuke from then-coach Todd Bowles. He was fined $13,369 by the NFL, but he parlayed the crude gesture into an endorsement deal with a company that sells toilet wipes for men.

In 2016, Crowell sparked a controversy when he posted on his Instagram account an illustration of a police officer being stabbed in the neck by a hooded figure. It was his response to the fatal shootings of two black men by Dallas police officers. A day later, five officers were killed by sniper fire. Crowell later apologized and donated a game check to the police department.

In five seasons, Crowell has 3,803 rushing yards and 27 touchdowns.

Marshall became a free agent after the Broncos opted not to exercise their team option with two years left on his contract. The 29-year-old appeared in 11 games last season but compiled only 42 tackles and didn't have a sack or interception.

After the season, Marshall acknowledged that he wasn't sure what his future looked like after the Broncos (6-10) missed the playoffs for the third straight season since their Super Bowl win in 2015.

"You don't know," Marshall said. "You know there's going to be a lot of change because we didn't make the playoffs the last three years. Yeah, we won a Super Bowl, but it just hasn't been right the last couple years. For me, I say it's up in the air. You don't know what the new coaches want, what they're going to do upstairs."