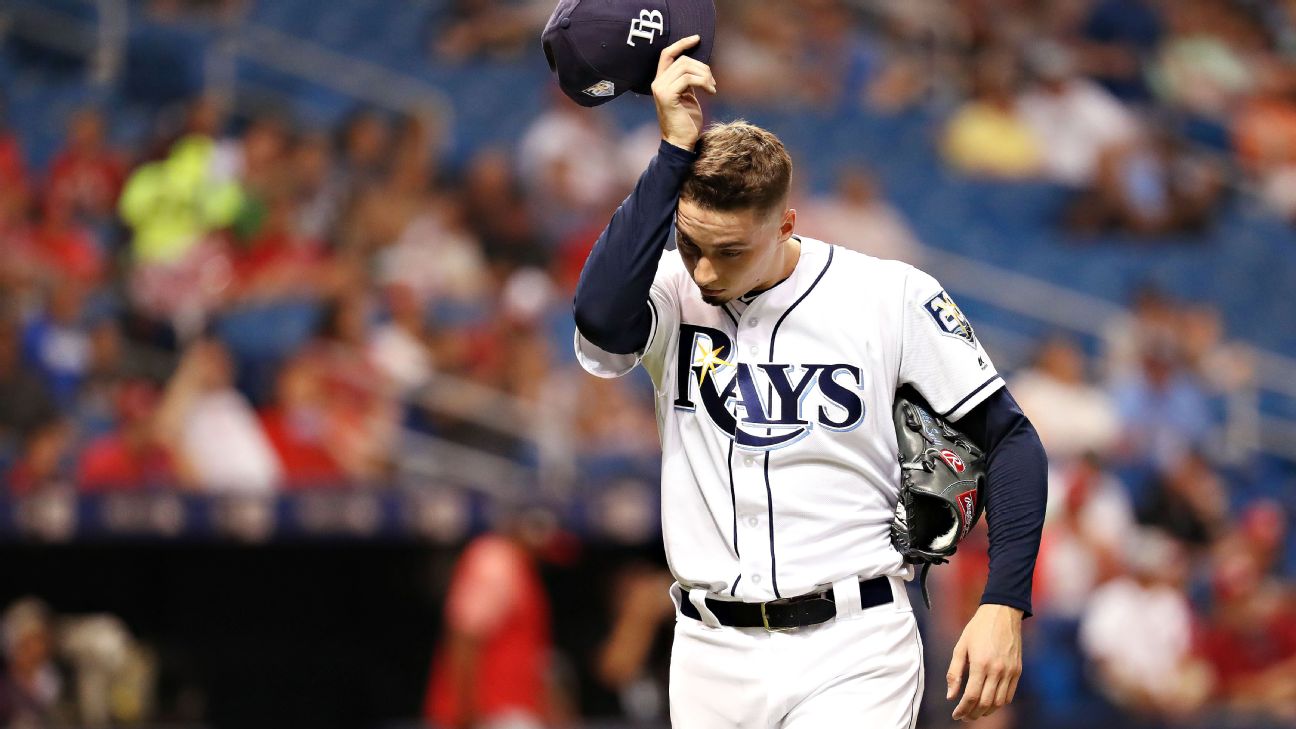 Picking the American League team was an impossible task because of the depth in candidates at starting pitcher, the depth at shortstop and the presence of several teams that lacked strong All-Star candidates. So let's start there.

Biggest AL snub: Blake Snell is one of the biggest snubs in recent years that I can remember. Snell leads the AL with a 2.09 ERA, is 12-4 on a mediocre Tampa Bay team, has 132 strikeouts in 116 innings and has held opponents to a .183 average. It's a breakout season for the young lefty, so how did he get left off?

Remember the rules: The players vote for the first five starting pitchers and first three relievers. I mentioned the loaded group of AL starters. The players went with Luis Severino, Justin Verlander, Gerrit Cole, Chris Sale and Corey Kluber. It's hard to argue against anyone in that group. Maybe Snell has an edge over Cole, but Cole started out on fire, and that no doubt helped him in the voting.

The players also fill in one backup at each position, including DH, so MLB is limited to five open spots on the AL team (not including the "Final Vote" choice). The trouble is, at this point, the Rangers, A's, Twins, Tigers and Blue Jays still didn't have a player on the roster. The league office actually caught one break here: Verlander is scheduled to pitch the Sunday before the All-Star Game, so he'd be inactive for the game, thus providing a sixth spot.

Of our five teams still missing a player, the one "must have" guy was A's closer Blake Treinen, who is 5-1 with a 0.81 ERA and 22 saves in 24 chances. They went with Shin-Soo Choo to represent the Rangers, which was a solid choice, given his .294/.402/.509 line, plus it's kind of cool that he's making his first All-Star team after a good career. That left only one position player spot to fill, but that was kept for the Final Vote -- you can't mix position players with pitchers there -- so you had to go with pitchers from the Twins, Tigers and Blue Jays, and the choices were Jose Berrios, Joe Jimenez and J.A. Happ.

That left just one more spot. MLB went with Trevor Bauer over Snell. Maybe the league didn't want to deal with Bauer's tweets if he'd been left off. Both are obviously more deserving than Berrios or Happ (who began Sunday tied for 32nd in the AL in ERA). Anyway, Bauer does lead the majors in FanGraphs WAR (though Snell leads in Baseball-Reference WAR), so it was hard to leave him off, and I'm OK going with the veteran over the breakout guy.

The potential positive: We will probably see another pitcher or two withdraw or pitch on Sunday, so maybe Snell will still find a way on the team.

Biggest AL surprise: Jimenez had a 12.32 ERA last year in 19 innings but has a solid 2.85 mark this year, with 46 strikeouts in 41 innings. He's OK. He isn't the closer. There are other relievers having better seasons. But somebody had to represent the Tigers. The other way you could have done it was pick Nick Castellanos and bump Choo, then go with a Rangers pitcher, but nobody on that staff stands out.

Somebody has to play first base: The fans voted in Jose Abreu as the best in a terrible group, although he isn't really having a good season (.259/.315/.448). Mitch Moreland is the backup, and at least he has good numbers. The past four AL starters at first base have been Abreu, Justin Smoak, Eric Hosmer and Albert Pujols. This position is not exactly at a historical peak. Matt Olson leads AL first basemen with 2.4 WAR, but the only others above 1.0 are Moreland (1.7), Smoak (1.7) and Yuli Gurriel (1.6). Ugh.

Only two shortstops: The requirement that the AL choose a backup DH hinders the flexibility of picking better all-around players. So no Andrelton Simmons,no Jean Segura (both are in the Final Vote, however) and no Carlos Correa. Those three rank seventh, 15th and 17th among AL position players in Baseball-Reference WAR.

Final Vote choice: Along with Simmons and Segura, you have Andrew Benintendi, Eddie Rosario and Giancarlo Stanton. The players voted in Michael Brantley (0.7 Baseball-Reference WAR) over Rosario (4.0) or Benintendi (2.6). I'd probably go with Simmons as the most deserving but Stanton as the guy I'd love to see pinch hitting late in a tie game.

Some thoughts on the National League ...

Biggest snub: The NL roster was much less complicated, and not having two DHs provides two more "free" selections. Really, the only difficult question was: Whom do you pick from the Pirates?

On the pitching side, Kyle Freeland (4.1), Ross Stripling (2.9) and Tyler Anderson (2.8) are the top guys left off. Freeland and Anderson are underrated because of Coors Field. The MLB picks at pitcher were Patrick Corbin, Miles Mikolas, Kenley Jansen and Felipe Vazquez. Mikolas and Vazquez are the only players from their teams, and Corbin has been terrific with a 3.05 ERA and 140 K's in 112 innings. I guess you could have gone with Stripling over Jansen, and I always prefer the starter, but given Jansen's long run as one of the game's best closers, you can't argue too much with his selection.

So the biggest snub? I guess I'd go with Freeland. A 3.18 ERA in Coors Field is a pretty remarkable achievement.

Biggest surprise: Let's just say I didn't expect Matt Kemp to (A) even make the Dodgers (B) be hitting .317 with 15 home runs and 57 RBIs (C) make the All-Star team or (D) get voted in as a starter. You can't predict baseball.

Aside from that, Mikolas has been a tremendous story for the Cardinals, coming back to the majors after three seasons in Japan and going 9-3 with a 2.63 ERA. Getting him for two years and $15.5 million was certainly the smart signing of the offseason.

Final Vote choice: Turner, Belt, Carpenter, Muncy and Jesus Aguilar are a strong group of candidates. My heart says Muncy given his remarkable fairy-tale season-from-nowhere. It would be nice to see Turner make it in front of the home fans. Using the same Stanton criteria, Muncy is the guy I'd love to see coming up late with the game on the line (well, unless Aroldis Chapman is pitching, in which case Aguilar might be the guy you want up there).

Who was snubbed for All-Star Game?
The Baseball Tonight crew picks players who were omitted from both leagues for the MLB All Star Game. 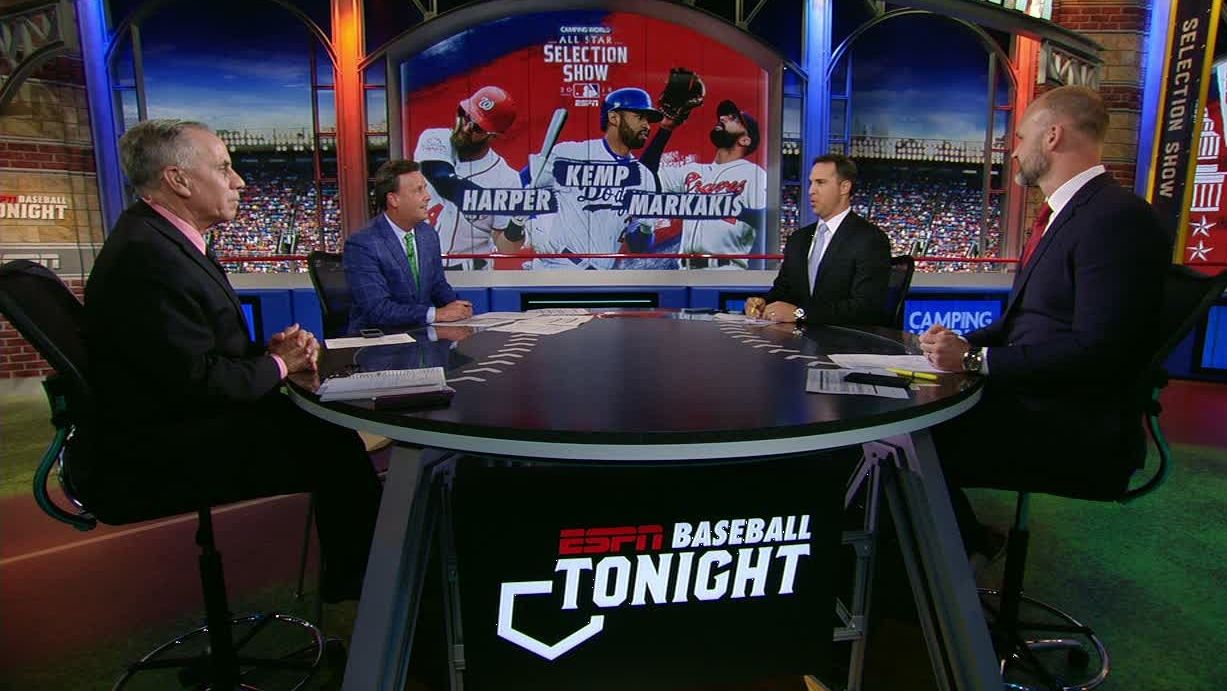