RB Derrick Green out for season 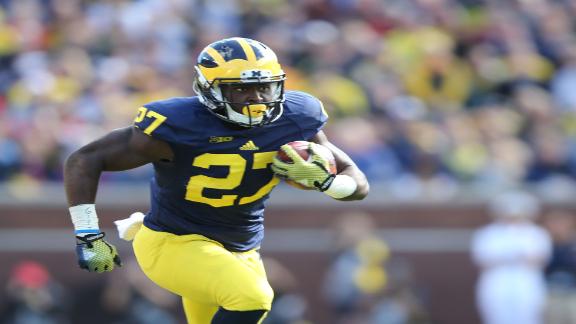 Michiganrunning back Derrick Green will miss the rest of the 2014 season with a broken clavicle, coach Brady Hoke said Monday.

Green, the team's leading rusher through six games, hurt his shoulder during a fourth-quarter run in a 26-24 loss to Rutgerson Saturday night. His absence is another blow to a Michigan offense that has struggled throughout a 2-4 start to the season.

"Derrick's attitude is very good," Hoke said. "He knows it's an expectation of him to help coach those young guys and coach guys being integral in what we're trying to get done. We're going to miss him."

Green started all six games for the Wolverines and steadily emerged as a feature back throughout September. The sophomore and former five-star prospect had 471 yards and three touchdowns on 82 carries prior to his injury.

Michigan will turn to sophomore De'Veon Smith and redshirt junior Justice Hayes to help replace Green's production. Smith and Hayes have combined for 66 carries and 383 yards so far this season. Smith scored his team-leading fourth rushing touchdown in the loss to Rutgers.

Sophomore Drake Johnson may also get a chance to contribute to the run game.